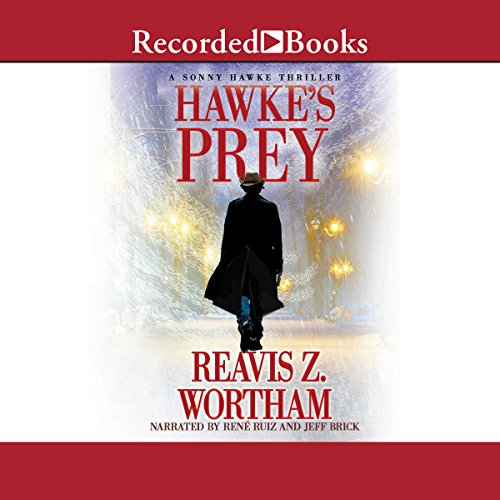 It's a stunning attack, lightning quick and chilling in its execution. A merciless gang of terrorists seizes the Presidio County Courthouse in the midst of the worst blizzard West Texas has seen in a century. Loaded down with enough firepower to outfit an army, the attackers slaughter dozens, take all survivors hostage, and assume complete control. The nation - and the US government - are at their mercy. Or so they think. They don't know that a seasoned Texas Ranger is also inside the courthouse.

Sonny Hawke has hauled in some of America's most wanted. Now he's up against his most dangerous adversary yet. Sonny likes his chances. The enemy is his to take down - one by one. Until he's face-to-face with the ruthless mastermind gunning for our very freedom.

What listeners say about Hawke's Prey

I found this wonderful author by taking a chance on a sale book long ago. I purchased and LOVED the entire Red River Mystery series (I have been hoping for more) and I can tell that I will enjoy this series as well.

The characters this author creates have a different type of depth than those found in the percentage of police/detective stories. The protagonists are not public servants with negative pasts, hard luck stories, beefs with the system, substance abuse problems or marital woes, but rather members of loving families with positive outlooks on life and normal issues. So refreshing. I personally enjoy the active part the kids take in both series. Seems somewhat quirky to have police stories where minors take an active role – but somehow it works in a believable way and adds interest to the story.

fun listen. scary that this could actually happen?
listened on the recommendation of Sally Berneathy. Glad I did.

Great story. Loved the plot even though I didn’t like the politics. Can’t wait to start the next in the series. As good as Red River series.

I have listened to all the Red River Mysteries and throughly enjoyed them. This new series looks to be bringing some of the same interesting characters, storyline and inability turn it off.

First book I've read by this author and seems to lend itself to other books with the same core characters. Really keeps you on the edge of your seat.

Hawke's Prey, by Reavis Wortham, was nonstop excitement. excellent writing, believable plot, good guys won! This was my first Audible book & the experience was good. I highly recommend the book, buy I do hope at some point kindle is able to give me the downloadable version to read for myself.

fantastic story, kept our interest to the very end, can't wait for him to finish another one in this series. every bit as good as the Red River series.