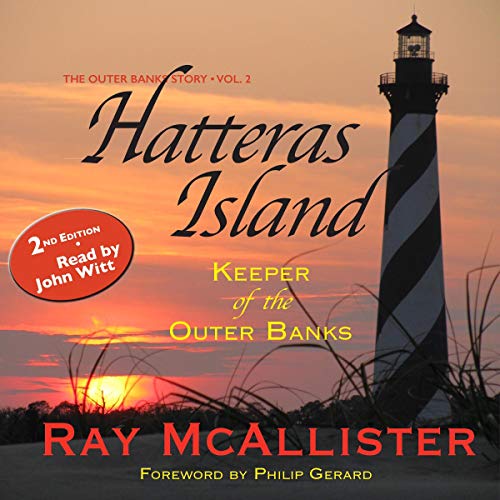 By: Ray McAllister
Narrated by: John Witt
Try for $0.00

Hatteras Island is a barrier island, part of the famed Outer Banks that run parallel to the North Carolina coast. But any map, let alone a satellite view from space, shows the island is not part of North Carolina at all. Hatteras belongs to the Atlantic Ocean, as much a part of the sea as fish and waves, and as much at the sea's mercy as sandcastles on the beach. And it belongs to the heart.

In Hatteras Island: Keeper of the Outer Banks, award-winning coastal writer Ray McAllister returns to the site of his family's annual vacations a quarter-century ago. Much has changed. But more has not. Elsewhere, fast-food restaurants, strip malls, and beach-dominating duplexes have overcome resort islands. But the storm-buffeted Hatteras - as much as 30 miles from the mainland and largely protected against intruders by national seashore status - has kept its soul.

Hatteras has long been a world class sportfishing and windsurfing spot. Its famed lighthouse, historic lifesaving stations, pristine beaches, and six small towns are magnets for tourists. But the Hatteras soul is also built on extraordinary history: early Native Americans who glimpsed Italian explorer Amerigo Vespucci in the 16th century, raids by Blackbeard and other cutthroat pirates, hurricanes that ripped apart the island, so many shipwrecks that its treacherous coastline became the "Graveyard of the Atlantic", Civil War battles and even a coastal war with German U-boats. It was here that radio pioneer Reginald Fessenden in 1902 transmitted the first musical notes received by signal, a heroic lifesaving crew saved 42 British seamen whose tanker was destroyed by a German submarine in 1918, and General Billy Mitchell's 1923 demonstration of the effectiveness of air power helped establish the US Air Force.

Hatteras Island also includes stories of fishermen, tourists, surfers, beachgoers, historians, generations of Hatteras families, and others who hold dear this island constantly being redefined by wind and wave.

What listeners say about Hatteras Island

I Love the Outer Banks

For 15 years, I had the opportunity, to live and work in Coastal Carolina. I absolutely loved the Land, Water, History, and the People. Experienced a few Hurricanes, climbed every Light House (that allowed it), routinely traveled the Ferry system, stayed in Okracoke frequently (off season best).
Loved the stories and History in this book. Listen to this before you go on vacation, to Coastal Carolina.