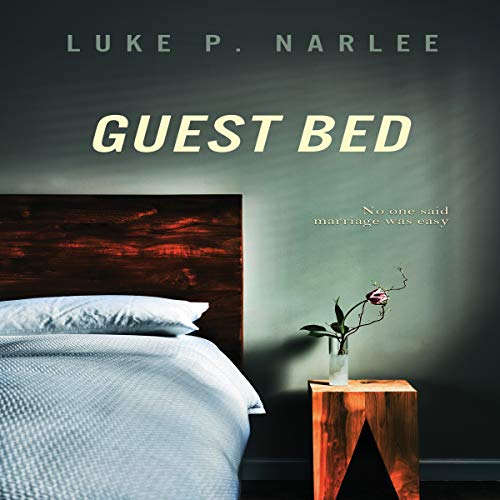 In this highly engaging debut novel, Luke P. Narlee intricately weaves romance, mystery, and psychological suspense as a marriage in trouble opens the door to temptation and turmoil.

Ron’s day is off to a bad start. Blinded by frustration after another argument with his wife and heartbroken that his marriage may be over, he accidentally crashes his car on his way to work. Dazed, he takes the train the rest of the way, where he is quickly delighted by the presence of another rider, Courtney, whose smoldering smile makes him remember what it feels like to be wanted.

What seems like a new friendship quickly turns into temptation, leaving Ron torn with internal conflict and guilt. But when his new friend starts to seem a little off, he begins to question her motives. As one seemingly harmless favor leads to another, Ron soon finds himself wondering if Courtney really is who she says she is or if she's actually part of an elaborate setup.

Steep with tension, this roller coaster of emotions takes the listener behind closed doors to explore the conundrum of love, life, and the unexpected.

"In Guest Bed, Luke Narlee weaves a romantic tale that turns both tragic and comic, revealing the ins and outs of marriage, and how sometimes after you think you've known someone forever, they can still surprise you." (Christopher Barzak, author of Wonders of the Invisible World)

What listeners say about Guest Bed

Looking in My Window

This book started off fantastic, as if this was looking in my window at home, or any window in America......with a couple that have been married for several years, with 3 kids, work and trying to balance life and be appreciated. Then the story takes a twist, almost morbid as the main character begins to think maybe he is loosing his mind as his wife is playing a trick on him (but this is not funny, in my opinion), while the kids are away at their grandparents, so the adults can celebrate their anniversary. The main character begins to reevaluate his life and his wife as he is tempted with another woman....and the "what ifs" start to play in his mind......I am not one for mind games and did not like the wife playing mental games on her husband-who is supposed to be her best friend...this was not an act of love in my opinion

The Guest bed, you just never know who is going to show up in it! This story of Ron and Kate is one I think a lot of couples can relate to. After being married for so many years, a couple can feel like the spark is gone, they lead separate lives in the same house. This one day, Kate is tired of it, and when she and Ron argue before work, their lives will never be the same. Ron meets Courtney, a woman having car trouble and is immediately attracted to her and from there this story takes some interesting turns. While not always a believable tale, there is definitely some feelings of unhappiness and regret, passion and love, and even some fear and stalkerish behavior. It's full of tension and romance. This is my first book by Luke P Narlee, and I found it kept my attention with just the right amount of suspense to keep the tension high. I really like the depth of the characters, we got to know them well, and each has characteristics we can find in ourselves. It visits complacency and how to make you realize just what you have in life. It's a provocative listen, and will leave you thinking when it's finished.

Dan Delgado gives a great narration. I had never heard him before and I was pleased with his ability. Ron is a character who needs a specific attitude with his voice, and I found that Delgado had him nailed down perfectly. He provided the female characters with voices that do not sound forced and made the narration a pleasure to listen to.

A fun escape from reality...

Guest Bed by Luke P Narlee was a fun escape from reality. Now let's make one thing clear. There's is really no way that this should work in real life. So if you can't set aside the fact that it's way out there, then I wouldn't recommend this book. That being said, overall, this was a fun listen, though it is nowhere near what I thought it was going to be about. You see, Ron is married to Kate. Things are pretty darn rocky in their marriage. Ron meets Courtney on the train and they're attracted to each other. Well, one thing leads to another and all of the sudden Courtney is a little too close for comfort. Ron wakes up the next day and his life has been turned upside down. He's in a mad struggle to figure out what is real and what isn't. I know that doesn't make much sense, but honestly, the book kind of tossed you from one end of the room to another in a split second with the crazy twists that are in this listen. Is it a book that I would re-read? No, though I don't typically re-read books unless they're amazing. Was it worth a listen? Yeah, I think it was. It kept me entertained until the end.

Dan Delgado did a great job narrating Guest Bed. His voice was perfect for Ron's character and the emotion that he put into the narration was spot on and added to the listening experience. I was voluntarily provided this free review copy audiobook by the author, narrator, or publisher for an honest review.

I wasn't really sure where this listen was going. What seemed like a family drama, morphed into a psychodrama, and then back again. It was an unexpected pleasure.

There were quite a few twists and turns in this listen and many times where I didn't know what was true. The reveal was a pleasant surprise but not earth-shattering. That was mildly disappointing.

I loved the narration. There was a constant question mark over the main characters head and that came through. All in all, an interesting listen.

I received a complimentary copy of this audiobook from the publisher/author but voluntarily give my honest review.

This type of story really is not my cup of tea because there are no battles or living dead (hahaha) but Dan's narration was outstanding.His voice is rich and melodious. He captures the emotions of the characters quite well and the pacing is nice and even. The sound quality is excellent. I think people who like these types of tales of romance, intrigue and the struggles in life that can lead ordinary people into bad places will enjoy this story. I don't quite understand the the idea of leaving less than good reviews if you're not gonna take the time to say why. They story is "pretty good" and the narration by Dan Delgado is great. It's is certainly worth a listen!

At first I thought maybe I wouldn’t be able to make it through this story because I hate listening to people fighting. And then it started taking some surprising turns that riveted my attention and locked me in. I was hooked and enjoyed it to the last minute.

Dan Delgado delivers a brilliant performance. He brings each character to life while not overdoing anything in a way that might be distracting. The audio quality is great and the acting perfect. A narrator who should be getting rave reviews!

Hmm....Let me start off by providing a theme/sentiment/mood of what kind of story this is because I had zero inclination of what I was in for based on the summary. As the book approached the middle and during midway, it seemed like it was going to be a warped version of the Adam Sandler movie, “Click” and the Nick Cage movie “The Family Man” combined. But that quickly dissipated and toward the end it then switched pace and reminded me of a really weird, confusing dark and extended version of an episode of the old tv show The Wonder Years. But I don’t mean this comparison based on the family or characters— I mean this because of the mood of the story as it came to and end — an odd kind of familial domestic drama. Additionally, it also seemed like the author wrote this book as an indirect (or direct) way to make a point or give a very, very particular message to his wife or to a specific female. This book started off in a way where I thought I knew exactly how it would turn out because of how obvious and blatant the story was unfolding. However, there was a twist that changed the game. Then it got interesting and the possibilities of what kind of book this was going to be were seemingly endless. I was intrigued by the prospect of it being twisted, or reality-bending even. Alas, as the end came closer and closer I realized we were back to square one. It was sooooo close to being a really wild and entertaining tale but it completely veered off that path. The one good thing is that it didn’t not end or unravel how I thought it would. This might be one of those books with mixed and conflicting reviews. Oh on a side note there were times where I laughed out load at the narration— like when the male narrator impersonated an old woman, child, or upset mother😂