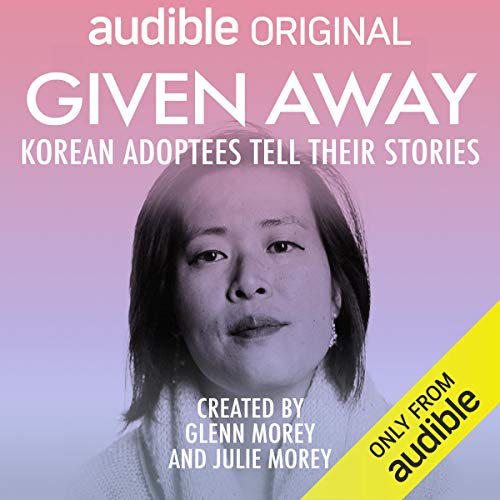 In 1955, an American farming couple saw a film about the thousands of Korean children orphaned by the Korean War. Through a special act of Congress, they were authorized to adopt eight of these children - which marked the advent of international adoption. Since that time, there have been over 170,000 children adopted out of Korea to more than 30 countries. And the practice of international adoption has expanded across the globe, with over a million children being adopted out of their countries of origin.

What happens when children’s lives are re-set by adoption? When they’re sent to new countries to grow up with families of a different race, a different language and culture? How have Korean adoptees navigated early trauma, family, and their own identity?

Korean adoptee Glenn Morey and his wife, Julie Morey, spent six years interviewing 100 Korean adoptees from around the world. This stunning Audible Original is comprised of 15 first-person accounts - an international journey through the personal memories and experiences of abandonment, relinquishment, orphanages, aging out, and inter-country adoption from South Korea. Together, they are a triumph of resilience and survival. To appreciate these extraordinary lives, you need not be adopted or an adoptive parent. You need only be human.

Glenn Morey is half of a husband/wife filmmaking team, along with Julie Morey. Glenn is an inter-country adoptee, born in Seoul, Korea, in 1960, abandoned as a new-born, and adopted at the age of 6 months to the US. He lives in Denver and has enjoyed a 40-year career in branding, media, and filmmaking. He was an Executive Producer for the documentary film, House on Fire: Black America Responds to AIDS, featuring the late Julian Bond, Rep. Maxine Waters, Kweisi Mfume, Maya Angelou, and many other African-American leaders.

We turn to books for joy, for laughter, and for comfort; for stories that stir the soul and expand the mind.

What listeners say about Given Away

As the adoptive mother of a son and daughter born in Korea, this book was an eye opening experience for me. It presented feelings and experiences of the Korean adoptees that I had never considered. In some ways it was a sad book, knowing that our Korean children often don’t feel accepted or integrated in society. While I’m very glad I read this book, I’m sorry that these adoptees feel such a disconnect. I’m ordering 2 copies for my adult children and hope this will open the door to conversations that should have occurred years ago.

Thank you for these beautiful stories about adoption and adoptees insight as adults. I loved how you let them tell their story, without promps or direction. These stories are helpful to hear and acknowledged the complexities of the past experience and how it effected their future. I have a niece and nephew that are adopted and these stores will help me be a better Aunt. Thank you for writing this book/audible and thank you to all those who shared their story.

This book forces you to think twice about the person across from you in any encounter. It is a powerful reminder that we can't know how someone grew up, what exposure they had, or what battles they are facing. I didn't know the history around the sudden surge of adoptions out of Korea -- this book inspired me to study. I've never known the emotions associated with grown adopted people -- this book opened my eyes.

Probably its best aspect is that there is no "theme" or "point" or "moral" to the book. These are just people sharing of and about themselves. It happens to be that their collective experience is absolutely fascinating.

This is absolutely wonderful. As a KAD, this production (and the greater Side by Side Project) has really been am incredibly powerful tool in helping me realize the larger community I am a part of.

These stories—so raw and honest—along with Glenn Morey's weaving between and expansions of them, are beautifully put together and are really engaging.

This was pivotal in my slow, gentle and guided journey out of my naive conception of my adoption into a more full sense of who I am today.

I had a student who eventually became a work mate. He was Korean but had an English first and last name and a Korean first name. I enquired of him and his answer was simply "I was adopted." He never said more. I never asked more. I was so clueless until I listened to this presentation.

Thank you so much for telling these stories. Being Korean and adopted is not part of my life start but an experience I always wondered about. You have done a service to all by allowing these stories to be told. They help all of us understand our lives just a little bit better.

I love how this book shared multiple parallel stories of the Korean adoptee experience. It was moving and compelling and humanizing of all parties: the birth parents, the adoptive parents, and the adoptees. Glad I listened to it.

Amazing, beautiful, and heart wrenching personal narratives. This book opens my eyes to the other side of the story.

This was a spellbinding Listen: Thoughtful, intense, unforgettable. I honestly think anyone from any background would benefit from hearing it.

A lot of interesting perspectives and backgrounds

I appreciate that it is people telling their own stories and there is such a wide variety of perspectives and backgrounds -- people with good and bad experiences and how it has shaped their lives. It really makes me appreciate what those people have gone through, even if they were placed in loving homes, being "given away" and coming to terms with that.