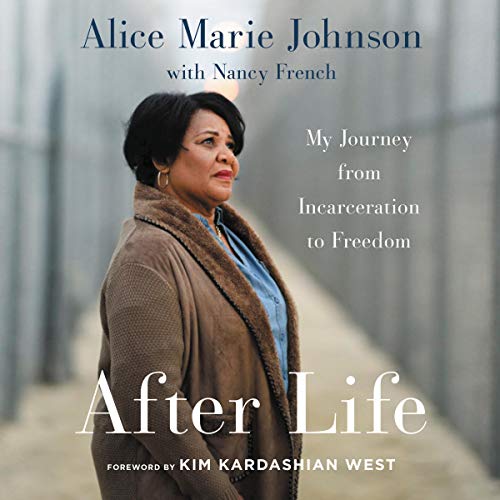 By: Alice Marie Johnson
Narrated by: Machelle Williams
Try for $0.00

The true-life story of the woman whose life sentence for nonviolent drug trafficking was commuted by President Donald Trump thanks to the efforts of Kim Kardashian West - an inspiring memoir of faith, hope, mercy, and gratitude.

How do you hold on to hope after more than 20 years of imprisonment? For Alice Marie Johnson the answer lies with God.

For years, Alice lived a normal life without a criminal record - she was a manager at FedEx, a wife, and a mother. But after an emotionally and financially tumultuous period in her life left her with few options, she turned to crime as a way to pay off her mounting debts. Convicted in 1996 for her nonviolent involvement in a Memphis cocaine-trafficking organization, Alice received a life sentence under the mandatory sentencing laws of the time. Locked behind bars, Alice looked to God. Eventually becoming an ordained minister, she relied on her faith to sustain hope over more than two decades - until 2018, when the president commuted her sentence at the behest of Kim Kardashian West, who had taken up Alice’s cause.

In this honest, faith-driven memoir, Alice explains how she held on to hope and gave it to others, from becoming a playwright to mentoring her fellow prisoners. She reveals how Christianity and her unshakable belief in God helped her persevere and inspired her to share her faith in a video that would go viral - and come to the attention of celebrities who were moved to action.

Today, Alice is an icon for the prison-reform movement and a humble servant who embraces gratitude and God for her freedom. In this powerful audiobook, she recalls all of the firsts she has experienced through her activism and provides an authentic portrait of the crisis that is mass incarceration. Linking social justice to spiritual faith, she makes a persuasive and poignant argument for justice that transcends tribal politics. Her story is a beacon in the darkness of despair, reminding us of the power of redemption and the importance of making second chances count.

What listeners say about After Life

A very good story of how a woman can remain so positive after all she had been through. Although she made mistakes in life, her punishment was unfair and very sad. Through it all she was an inspiration to others, helping them and guiding them through their own hardships and being a remodel of true strength.

Ms. Johnson's story has left an indelible print on my soul. She is Esther, Daniel, David, and Joseph all rolled into one, and represents her Lord and Savior, Jesus Christ so well. Admiration for her unshakable faith behind bars and total praise to God for the work that she has embraced since being released. Keep fighting for your friends, sisters, and comrades. Outstanding audio book!

I have absolutely no words! It's Amazinggggggggggggggg My hearttttt is filled with emotionsssss 😭♥️ WOWWWW

To God Be The Glory

This story is inspirational on all levels. It is a demonstration of the power of faith. Ms. Alice is a remarkable individual that God has chosen for such a time as this. The injustice of mass incarceration must end and Ms. Alice is right there among those leading the charge. Thank you Ms. Alice Marie Johnson.

I found myself wanting to listen moment to moment .my favorite moment was when her uncle bolted her in the gut and she kept getting up and wouldn't shed a tear.I hate bullies.

An inspiring story of a young woman who was caught up in the unfair justice system and given a life sentence for a fist offense, non-violent drug related crime. Her story is one of sadness, passion, and inspiration. Alice took the advice of a mentor in prison and choose to bloom where she was planted and never, ever gave up hope. Through prayer, determination, and laughter Alice became a hero to all women in and out of prison and reminds all of us to bloom where we are planted.

Amazing story and story telling. I took me 4 days on my commute to complete the book. Great read!👍🏽

This book is about people I simply didn't care about prior to reading it. Not drug people, not famous beauty queens, and not the Nice Guy Side of President Trump. Yet, I found myself captivated by the details of the story and how different they were from my preset ideas. To some degree I think I was set free also.

This is the most inspirational story I’ve read in a very long time. It’s a story of faith & redemption. I had no idea that our criminal justice laws were so badly in need of reform. Thanks to all those who helped Alice Johnson & so many others like her. Thanks to a President Trump for changing the law.

An ego trip if ever there was one, the main story line is almost completely replaced by how wonderful the author assumed herself to be. Would not recommend this unfortunately