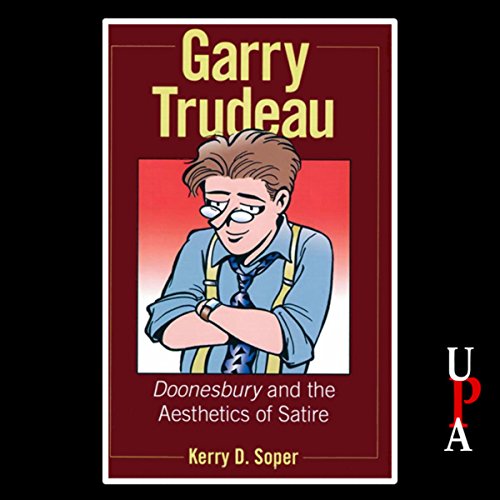 Since 1968, Garry Trudeau (b. 1948) has brought his brand of political satire to bear on public figures, movie stars, heads of state, and even on himself. Trudeau has also advocated for artists' rights and challenged industry norms while keeping a decidedly low profile. In Garry Trudeau: Doonesbury and the Aesthetics of Satire, Kerry D. Soper traces the contribution of this groundbreaking artist. Trudeau is arguably the premier American political and social satirist of the last forty years. Amazingly, he achieved this on the comics page, rather than the editorial page. By defying convention, Trudeau has established a hybrid form of popular satire that capitalizes on the narrative continuity and broad reach of the comic strip form, while operating according to the rules of combative political commentary. Garry Trudeau is divided into chapters that offer a history of Doonesbury; an analysis of Trudeau's effective satiric methods; a discussion of the methods whereby he challenged the business practices of the comic strip industry; an examination of the aesthetics of Doonesbury; and a consideration of Trudeau's significance as a social chronicler through an analysis of his character construction, narrative practices, and documentation of the American zeitgeist. Garry Trudeau is a thorough assessment of one of America's most popular and controversial cartoonists. The book is published by University Press of Mississippi.

What listeners say about Garry Trudeau