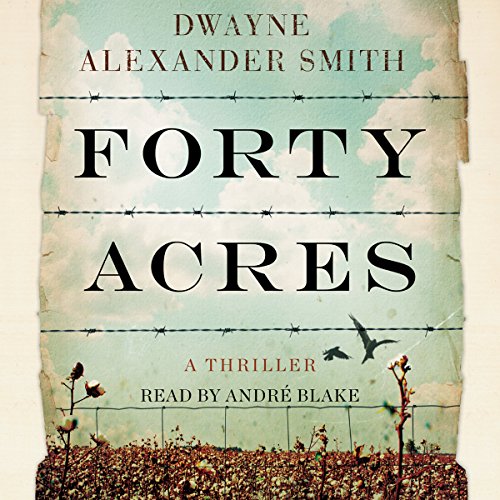 By: Dwayne Alexander Smith
Narrated by: Andre Blake
Try for $0.00

What if overcoming the legacy of American slavery meant bringing back that very institution? A young black attorney is thrown headlong into controversial issues of race and power in this pause-resisting and provocative new audiobook.

Martin Grey, a smart, talented black lawyer working out of a storefront in Queens, becomes friendly with a group of some of the most powerful, wealthy, and esteemed black men in America. He's dazzled by what they've accomplished, and they seem to think he has the potential to be as successful as they are. They invite him for a weekend away from it all - no wives, no cell phones, no talk of business. But far from home and cut off from everyone he loves, he discovers a disturbing secret that challenges some of his deepest convictions.

Martin finds out that his glittering new friends are part of a secret society dedicated to the preservation of the institution of slavery - but this time around, the black men are called "Master." Joining them seems to guarantee a future without limits; rebuking them almost certainly guarantees his death. Trapped inside a picture-perfect, make-believe world that is home to a frightening reality, Martin must find a way out that will allow him to stay alive without becoming the very thing he hates.

A novel of rage and compassion, good and evil, trust and betrayal, Forty Acres is the thought-provoking story of one man's desperate attempt to escape the clutches of a terrifying new moral order.

What listeners say about Forty Acres

I wanted to like this book so badly because I thought the concept was interesting. I particularly liked the idea of 'black noise', but it seems like a poorly repackaged version of what Joy DeGruy calls post traumatic slave syndrome. The writing is elementary at best. It reads like a 10 year got his hands on a thesaurus. This writing lacked any and all sophistication, nuance and depth. The story was predictable and ridiculous and the real lack of character development made you not care one single iota about any of the characters. The elementary writing coupled with the highly melodramatic narration made me cringe through the entire book. The narrator sounded like he took lessons from Mexican telenovela actors. There were far too many moments when I would let out huge sighs, scream "BS!!" or just look away with an extreme side-eye. But for whatever reason, I felt obligated to finish the book - reminded me of watching a train wreck...I couldn't stop listening even though it was PAINFUL. The fact that the ending was left open makes me cringe at the thought that there may be a sequel. I wish I could give this zero stars. I wonder if there is any way to get a refund.........

Would you ever listen to anything by Dwayne Alexander Smith again?

No, he needs to finish that schooling he dropped out of and learn a thing or two before writing again

Would you be willing to try another one of Andre Blake’s performances?

I was appalled to listen to the author villianize Black men who were trying to figure out reparations ( the author should look that word up) by casting them as sociopaths. The dumbest thing about the book is that he had so called business men wasting their time and money to run a mine that produced little to nothing, If your characters were businessmen, they would have run a prrofitable business down there, making clothes, shoes, African history memorabilia, something! No believable businessmen would pay to run a business that yielded no profit. Also the sexism is disgusting, why isnt Anna getting aroused and dry humping someone? The heroine is virtuous and the men get their freak on like the ass slapping main character, Worst of all the author disgraces the names of Micheal Brown, Eric Garner, Temir Rice, Sandra Bland and the Charleston Nine by making their story a backdrop to his heroic rescue of a beautiful blond white girl. If he ever wrties again - he should stick to books about ass slapping and fucking hard. That is this authors only believable area of expertise. What this author knows about Black history and the struggle for justice clearly indicates that he left school too soon.

Where does Forty Acres rank among all the audiobooks you’ve listened to so far?

the messages, the history, the irony, and the plot.

He did a great job of giving each character a unique identity. Carver especially.

loved it...kept me very interested. it should be a good discussion for book club meeting.

will engender much debate

This story was quite different from most stories I listen to;

The story line takes place in modern day but, the groups mind thoughts are back in slave days. this supposedly intelligent man is talked into going along with a group of men on a trip for four days with out any of their wives..no phone access just men. he has no idea where they are going and when he dose asks they drug him; this is where the story pulls great interests to me as to where are they taking him? and I think i have this figured out but no I don't

the unrealistic side is the main character becomes so absorbed in wanting to be friends with these professional elite status men who by the way are enormously rich and they want to take him on the trip of his life so he can join their elite status group.He feels so privileged he doesn't even bother to question the method of their madness until it's too late

The story is definitely unusual and has many different twist... It held my interesting and attention even though ,I had to take brakes because the story lines were somewhat crude and barbaric

Forty Acres is an enjoyable political thriller that quickly peaks your interest, builds in intensity and has you up late into the night in suspense. You will be asked to delve into your own thoughts on social injustice and civil rights. Not as a history lesson but, as modern day choices in the midst of peer pressure.


Martin Grey is a young attorney that you are instantly drawn to and look for good things coming his way. When he finds himself the attraction of powerful patricians during a high profile court case, you can easily see how he is drawn into stepping out of his norm when invited. It feels to him as a step forward after a job well done. Imagine the surprise when in actuality it leads into the past.


Forty Acres takes you to uncomfortable places that you won't see coming. I want you not to see it coming as well - so I won't be telling you more of the plot. The best part of this book is that the author does an exceptional job in blindly leading the protagonist and readers into a modern day American expedition. When Martin comes to the realization that he is at a loss to his current physical location, amongst other things, I was right there with him grabbing for the worthless smart phone.

This is Dwayne Alexander Smith's first novel coming from a career as a screen play writer. The first part of this book, for me, was superior. It's fresh, face paced and exciting. There comes a point in the plot where it jumped the shark, for me, I am sad to say. Did it ruin the book for me? OH NO - exactly the opposite. It just had me spending a few additional days pondering how I wish it had gone differently and at what point did it revert to a screen play. It's a fine book and well worth the credit. It's very thought provoking.


Andre Blake's narration is flawlessly transparent. He accentuates the text with his exceptional performance.


I look forward to each and every future work by both.

This book is different. The narration helped.

I enjoyed most of the book but,
I did not like the ending. the last part was incomplete and rushed.

There was nothing to dislike about this book. It kept you from page one. Great story line. Must be able to keep an open mind while reading. Highly recommend this book.

THAT was the ending?!?

What made the experience of listening to Forty Acres the most enjoyable?

The story line was interesting and very thought provoking.

How the roles were reversed. It made think and wonder if this story line really does exist out there in the world.

I liked the book overall but the ending needed a little work. It was like a great joke with a horrible punch line. I was waiting on a twist at the end and all I got was disappointment! I guess the author is trying to prepare the reader for a sequel?!?

reparations ordained by any way means power, money, and fame boys will be boys...
loved it