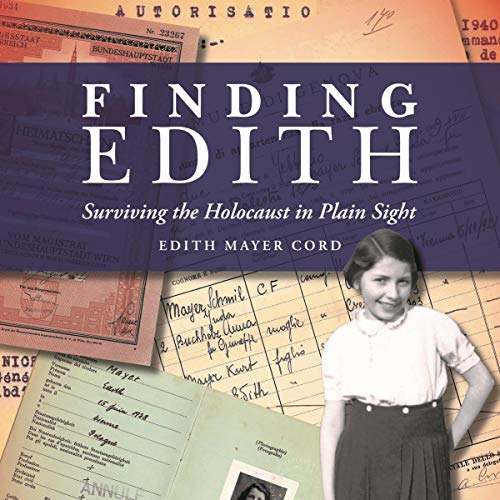 By: Edith Mayer Cord
Narrated by: Serra Hirsch
Try for $0.00

Finding Edith: Surviving the Holocaust in Plain Sight is the coming-of-age story of a young Jewish girl chased in Europe during World War II. Like a great adventure story, the book describes the childhood and adolescence of a Viennese girl growing up against the backdrop of the Great Depression, the rise of Nazism, World War II, and the religious persecution of Jews throughout Europe. Edith was hunted in Western Europe and Vichy France, where she was hidden in plain sight, constantly afraid of discovery and denunciation. Forced to keep every thought to herself, Edith developed an intense inner life. After spending years running and eventually hiding alone, she was smuggled into Switzerland. Deprived of schooling, Edith worked at various jobs until the end of the war when she was able to rejoin her mother, who had managed to survive in France.

After the war, the truth about the death camps and the mass murder on an industrial scale became fully known. Edith faced the trauma of Germany’s depravity, the murder of her father and older brother in Auschwitz, her mother’s irrational behavior, and the extreme poverty of the postwar years. She had to make a living but also desperately wanted to catch up on her education. What followed were seven years of struggle, intense study, and hard work until finally, against considerable odds, Edith earned the Baccalauréat in 1949 and the Licence ès Lettres from the University of Toulouse in 1952 before coming to the United States. In America, Edith started at the bottom like all immigrants and eventually became a professor and later a financial adviser and broker. Since her retirement, Edith dedicates her time to publicly speaking about her experiences and the lessons from her life.

What listeners say about Finding Edith

What a beautiful story! I especially appreciate having an alternative option to listen to the audiobook as opposed to reading the physical copy. The audio version is convenient for when I am in the car or going somewhere without having the actual book with me. I carry my phone with me wherever I go, so the audio version is accessible at any time. I love that I also have the chance to hear the Author’s voice as I listen to her story. It makes the experience more personal and engaging. I was able to connect more. Each feature on audible is accommodating to how I listen/read. Bravo!!

I really enjoyed this audiobook and story of a remarkable woman and her life in hiding during the Holocaust. But her story doesn't stop at the end of the war. You get to experience how she struggles to rebuild her life and self-esteem after the war, dealing with compounding traumas with remarkable maturity and grace for a young adult! The narrator does a great job of telling the story and you even get to hear from the author at the beginning and end. Though the subject matter is "heavy", the book is definitely appropriate for young adults because she doesn't discuss any horrifying graphic details. And young people facing difficult circumstances may relate to her struggles and be inspired to put in the hard work to build a better future. But this book is definitely inspirational for people of every age.

Powerful, honest and moving story of a girl surviving the Holocaust

Narrated with warmth, emotion and clarity, this book reveals the struggles of a Jewish adolescent girl in hiding during World II. Enriched by the author comments at the beginning and the end of the story, this book is a true account of her life.
High school or college level.