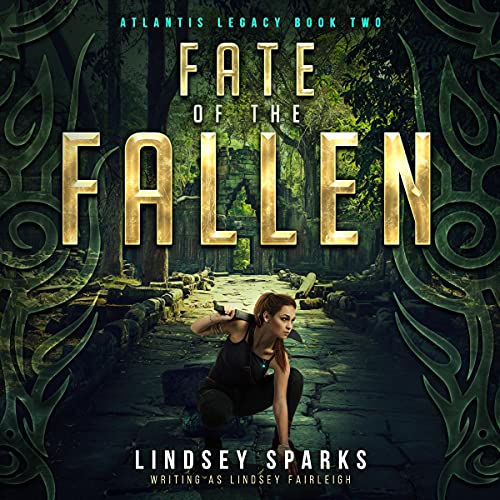 Fate of the Fallen

By: Lindsey Fairleigh
Narrated by: Dana Dae
Try for $0.00

Fate of the Fallen is the sequel to the exhilarating treasure-hunting adventure, Legacy of the Lost.

Some myths hold a seed of truth. She must uncover the truth behind the myth of Hades, god of the underworld...before it destroys her.

Using wit and gumption - along with a hearty dose of her newfound psychic gifts - Cora Blackthorn has narrowly escaped the clutches of the Custodes Veritatis. With the help of her closest friend and strongest ally, Raiden Cross, as well as her mental hitchhiker, Persephone, Cora must outrun the sinister secret order long enough to uncover the mysteries left behind by Hades, the last of the Olympians. But when an ancient treasure hunt turns into a wild goose chase, Cora fears the worst - the quest is hopeless.

Until an unexpected discovery sets Cora on a new path.

A hidden civilization thrives deep underground beneath the Amazon rainforest, and they have been waiting for Persephone's return. With their help, Cora discovers that the greatest danger to her life isn't the Order; it is Persephone, herself.

Fate of the Fallen is the second book in the captivating new sci-fi adventure series, the Atlantis Legacy. If you like ancient mysteries, Greek mythology, treasure-hunting adventurers, and dynamic characters, then you’ll love this exhilarating adventure!

Books of the Atlantis Legacy Series

Sacrifice of the Sinners (prequel)

Legacy of the Lost

Fate of the Fallen

What listeners say about Fate of the Fallen

Great continuation, I need the next book!

I was looking forward to seeing how Cora continues on her quest for answers and I was not disappointed.

Living in Brazil, I was very excited about this book being set in the Amazon - the new characters are everything you wish for and more! A lot happens to Cora and the gang in this book and the ending is absolutely phenomenal.

The narration is perfect, as always! I love Dana!

The narrator does a really good job including doing male voices. There was much to enjoy in this series, mythology, religion, science, technology, history. The characters were relatable, the story intriguing, and the mystery enough to keep you drawn in.