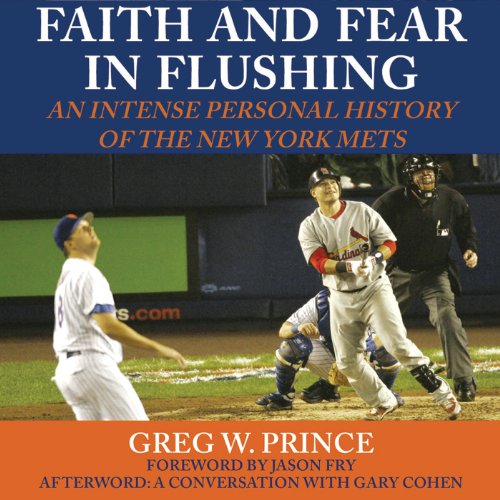 Faith and Fear in Flushing

The New York Mets fan is an Amazin’ creature whose species finds its voice at last in Greg Prince’s Faith and Fear in Flushing, the definitive account of what it means to root for and live through the machinations of an endlessly fascinating if often frustrating baseball team.

Prince, coauthor of the highly regarded blog of the same name, examines how the life of the franchise mirrors the life of its fans, particularly his own. Unabashedly and unapologetically, Prince stands up for all Mets fans and, by proxy, sports fans everywhere in exploring how we root, why we take it so seriously, and what it all means.

What was it like to enter a baseball world about to be ruled by the Mets in 1969? To understand intrinsically that You Gotta Believe? To overcome the trade of an idol and the dissolution of a roster? To hope hard for a comeback and then receive it in thrilling fashion in 1986? To experience the constant ups and downs the Mets would dispense for the next two decades? To put up with the Yankees right next door? To make the psychic journey from Shea Stadium to Citi Field? To sort the myths from the realities? Greg Prince, as he has done for thousands of loyal Faith and Fear in Flushing listeners daily since 2005, puts it all in perspective as only he can.

What listeners say about Faith and Fear in Flushing

Starts a bit slow, then really takes off

I'm about halfway through. It was a bit muddled at first, but then gets into a true timeline of a true Met fan. The guy reading this, however, has zero clue of how to pronounce names correctly. Every time he screws up a name, it just cuts right into me.