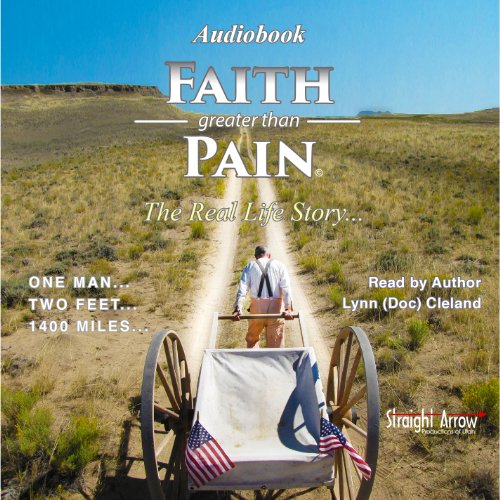 Some may say Doc was just an old man on a long walk, but it was a walk that forever changed his life. He lived experiences you may not believe, and had conversations you may not be ready for. Only you can open that door, when you're ready. If you find something in this audiobook that changes your life, you are not alone.

Doc Cleland is a man who lost his childhood to an abusive, alcoholic stepfather; his wife to Lou Gehrig's disease; his job, home, and savings to the economic downturn; and 4 of his 5 children to paths that stray from his Mormon roots and lifestyle. Seemingly a man who has also lost his path in life, Doc decides to honor his great-grandmother's memory by re-creating her pioneering handcart journey of 1856. He begins walking in Iowa City, pulling a wooden handcart, heading west on his 1400-mile journey, uncertain of exactly what he'll encounter along the way.

Although Doc walks alone, his encounters along the way expand his experience to an understanding of humanity in its many and varied forms, from the Schwan's delivery man who drives ice cream out to him, to the Civil War Re-enactment buff who gives up a day to drive behind and protect him, to the women who spend their days rescuing birds from sludge ponds and share their stories with him.

In Faith Greater Than Pain, Sarah Goode Marshall's story anchors Doc's modern-day journey, as each - separated by a century and a half - walks toward Zion, all the while discovering a second Zion within.

Would you consider the audio edition of Faith Greater than Pain to be better than the print version?

It's more practical, as it can be utilised in a many life situations where reading is not possible, (while driving, walking etc...)

What other book might you compare Faith Greater than Pain to and why?

Ayn Rand "Atlas Shrugged"
Well, it's the study that proves that opposites touch...especially here.
However mysterious it's nevertheless true that Atlas shrugged is as much a foundation of America as the Faith or the Bill of Rights...

What about Lynn "Doc" Cleland’s performance did you like?

The meaning comes out through his reading.
So often technically impeccable reading has the cardinal fault in this: the reader has no comprehension of ideas he is vocalising perfectly.

It's hard to improve Swiss watch. Let's go back to American forgotten basics...

It's an inspirational sermon, but it will appear true to the bone, even to those who made sure never to attend one. Some well worn truth that only self disciplined moral man will be able to pull the greatest society on earth into the new century retaining its liberty & justice & friendliness, are warmly validated.
I would however remain reserved to any Neo-Catholic & Neo-Platonic organisational structure as LDS, and in that respect one does well to remember that, prevailingly, now and then, America was made with more horizontally structured Fundamental Evangelical and Independent Baptist congregations (direct democracy & juries of all kinds, right?..).
Humble contribution to the Truth, from great soul, great enough to stay humble after all achieved.