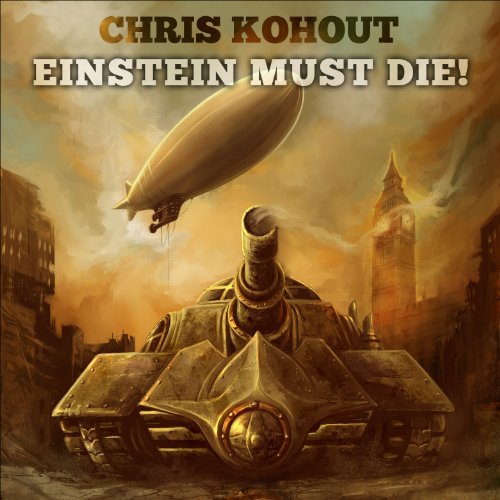 1910 AD - Impending war with England has given Nikola Tesla the chance to build his dream: a weapon to end all wars. The American steam-powered Beowulf tank is larger than a house, and carries enough firepower to face an army. Beowulf also has a mechanical brain, embedded with the consciousness of Colonel Browning, America's best military strategist.

But in England, King George has put Albert Einstein to work for his own war effort: zeppelins capable of reaching the former colony, and new, radiological bombs to remind them of the price of disloyalty.

When two brilliant pacifists wield technology to bring peace to a planet at war, the final outcome will surprise them both, and the world.

What listeners say about Einstein Must Die!

What would have made Einstein Must Die! better?

Where to start? Sophomoric writing, no historical accuracy about the era, historical figures, or situations.

What was most disappointing about Chris Kohout’s story?

lack of any structural consistency in his plot or technology involved. Supposed to be set in the early 1900's yet the book begins with a sea-battle between a Ship of the Line and a Constitution class frigate. It gets worse from there.

Who would you have cast as narrator instead of Corey Snow?

I think he did the best he could with the material.

What character would you cut from Einstein Must Die!?

Yeah. I know Steampunk has its own rules, but this book felt like it was written from a ninth-grader's study hall day-dream. Thank God for Audible's return policy.