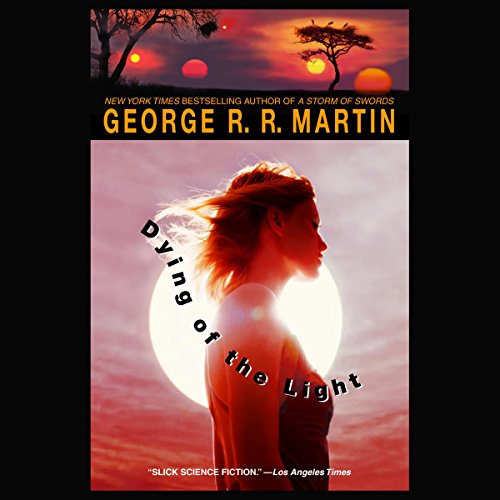 Dying of the Light

In this unforgettable space opera, number-one New York Times best-selling author George R. R. Martin presents a chilling vision of eternal night - a volatile world where cultures clash, codes of honor do not exist, and the hunter and the hunted are often interchangeable.

A whisperjewel has summoned Dirk t’Larien to Worlorn, and a love he thinks he lost. But Worlorn isn’t the world Dirk imagined, and Gwen Delvano is no longer the woman he once knew. She is bound to another man, and to a dying planet that is trapped in twilight. Gwen needs Dirk’s protection, and he will do anything to keep her safe, even if it means challenging the barbaric man who has claimed her. But an impenetrable veil of secrecy surrounds them all, and it’s becoming impossible for Dirk to distinguish between his allies and his enemies. In this dangerous triangle, one is hurtling toward escape, another toward revenge, and the last toward a brutal, untimely demise.

"Dying of the Light blew the doors off of my idea of what fiction could be and could do, what a work of unbridled imagination could make a reader feel and believe." (Michael Chabon)

"The galactic background is excellent.... Martin knows how to hold the reader." (Asimov’s)

What listeners say about Dying of the Light

This is George RR Martin’s earliest novel, and I daresay it anticipates A Game of Thrones in a few ways. The notable difference is that it’s science fiction instead of fantasy. Regardless of genre, though, Martin has always had a talent for imaginative world-building, for conveying a sense of universes that are very old, full of history, and home to many other stories besides the immediate one.

The setting here is cool and gothic, a rogue planet named Worlorn which had a brief heyday as a sort of exhibition world for the neighboring star systems, which terraformed it and built showcase cities on it as it passed by a cluster of stars called Fat Satan and the Hellcrown (great names). Now winter is coming forever, as the mostly abandoned Worlorn heads back into deep space.

The story concerns a man named Dirk, who receives an object of significance in the space mail from an ex-girlfriend he’s still sorta pining for. Gwen is on Worlorn, studying the unique ecology. When he gets there, he discovers that she’s sorta married to a man named Jaantony from a planet called Kavalaan. And to Jaantony’s bondsman as well. Gwen cares for her primary mate, but isn’t totally happy with her life. As it turns out, Kavalar society has a feudal past, very unfeminist values, a strong code of honor, and complex social rules left from its dark history. An offshoot colony has come to Worlorn in (seemingly futile) hopes of keeping its culture alive against the forces of modernization. Of course, Dirk’s arrival upsets the already uneasy relationship between three people, and he soon runs afoul of an even-more-traditional group of Kavalar, which has a very xenophobic view of outsiders. Such civilization-versus-barbarian themes will be familiar to AGoT fans, and Martin handles them intelligently, finding particular sympathy for Jaantony, who’s trying to walk the line between his people’s code and a more tolerant, up-to-date interpretation of it. The middle portion of the novel, with its chase scenes in a giant, computer-run building, is fairly suspenseful. Dirk isn’t a warrior, so he has to make realistic choices to survive against people who are.

That said, there are some frustrations. There’s a pervading feeling of melancholy, ambiguity, and tragedy, as is true in a lot of Martin’s early writing (which I like), but it feels too ambiguous at times. Dirk and Gwen aren't really fleshed out beyond being somewhat whiny modern everypeople stuck in a backwards world, and I found their relationship history vague. Jaantony was a more compelling character. It’s also a bit of a shame that we don’t see a little more of the larger universe -- the bits and pieces we do get are interesting.

Still, it’s a fairly impressive, mature first novel for a young author, and worth investigating if you’re a GRRM fan. His huge short fiction and novella anthology, Dreamsongs, offers a somewhat richer tour of his non-AGoT work, but if you get through that, this is a worthy next stop. Kudos to Iain Glen (Ser Jorah Mormont on the AGoT TV series) for the fine audiobook reading. 3.5 stars.

I guess this was RR Martins first novel so we have to cut him some slack, the story and character development are perhaps not up to the authors standards but this novel was a decent listen and will keep you entertained, Fevre Dreams his second novel was far better.

The characters were fickle minded and directionless. This was pure Romance/Bromance in a scifi setting. if this novel can be said to have a theme it would be "lost in translation". The word repetition is horror able. If a book needs to repeat stuff this much the author should have just added a glossary in the back. I only stayed with it until the end because it is set in the Nightflyers universe.

couldn't wait for it to end. uggggh. so much talk about nothing. it did not draw me to it like some books where I can't wait to pick it back up.

Dying of the Light is wonderfully well-written, as you’d expect from GRRM. But the story feels empty and often pointless. Maybe that was the author’s intent, I don’t know, but I finished the book and regretted wasting my time when I could’ve read something better.

Enjoyable story, immersive world. Would have been a slow read, but the audio version had me entranced. Death and themes of fading out are what it is all about, so it's not a happy book. It creates a thoughtful mood.

A one-and-done glimpse into a sci-fi world that could have been.
Ian Glenn doesn't have many titles on Audible, but this is a must have if you're like us and think he could read the dictionary and make it compelling.

Depends on the friend. This book is character-heavy, melancholic, and somewhat philosophical. It's very slowly paced in the beginning, and the main character can be frustrating, but both pick up as the story progresses. Dying Of The Light is a soft sci-fi character piece, and I would recommend it only to the patient.

As with A Song Of Ice And Fire, I like how Martin fleshes out both the main and secondary characters. I like the ambiguity, the prose, the shifting alliances, and, although there may have been too much of it, I liked the universe-building. I also like the plot, once it picks up two-thirds of the way in, and I liked the thoughtful anti-climax.

Which character – as performed by Iain Glen – was your favorite?

My favorite character is probably Jaantony Riv Wolf high-Ironjade Vikary. I found most of the Kavalaar characters to be more interesting than Dirk or Gwen.

The climax/ending, for one. There was a certain character death outside Kryne Lamiya that I found affecting.

I thought the reading was excellent. Jorah Mormont should narrate more books.

In the outer fringe of the inhabited universe, the rogue planet Worlorn falls darkly through space. But years ago it circled the Wheel of Fire, the brilliant wheel-shaped star system that is worshipped by many in the outworlds. Worlorn, the Wheel of Fire’s only planet, was lit for fifty years before it wandered off again. During that half-century, the outworlds held a cultural diversity festival on Worlorn, with each world trying to outdo the others when building their extravagant temporary cities on a planet they knew they’d only inhabit for a few decades.

Now that Worlorn is fading into darkness again, the cities are almost completely abandoned, but there are a few people left on the planet. When Dirk t’Larien is summoned there by Gwen, the ex-girlfriend he still loves, he discovers that Worlorn is no longer a festival planet. Now it’s dark and dangerous. Worse, though, is that Gwen is now mated to Jaantony Riv Wolf high-Ironjade Vikary, a leader of the Kavalar race which, in order to protect its few women and children, has developed some barbaric customs and codes. Most notably, men form high-bonds with a male partner and may have a wife as a shared piece of property. Jaantony, both a warrior and an academic, is eager for his peoples’ culture to become more liberal towards women, but his is a minority opinion. The man he is bonded to, Garse Janacek, does not agree. And the larger faction of the Kavalar race, including some who are hunting non-Kavalar humans on Worlorn, is happy to find any reason to pick a fight with Jaantony Ironjade. When Dirk gets to Worlorn, he unwittingly walks right into the middle of a tense situation and only makes it worse.

Dying of the Light, first published in 1977, is George R.R. Martin’s debut novel and it’s impressive. The setting is wonderful: a dying planet getting farther and farther away from its sun; abandoned cities; jungles with strange and deadly life forms; fascinating cultures. My favorite feature was the city of Challenge which is a 500-story building housing thousands of apartments and lots of cool amenities. Because it’s run by machines, much of Challenge is still operative though only a handful of people still live there. The most exciting action in Dying of the Light occurs in Challenge — I loved this part of the story.

The clashing cultures that Martin creates are also imaginative and fascinating and he hints at plenty of history and backstory that he never gives us but that make this world feel real. I wish he’d write more about it. I’d love to read about the fifty sunny years on Worlorn, for example.

Unfortunately, none of George R.R. Martin’s characters are likable. Dirk is passive and Gwen is flighty and indecisive. It was hard to root for them as a couple, especially when Jaantony Ironjade was more interesting than Dirk. I’d classify Dying of the Light as a science fiction romantic tragedy (in fact, Dirk, who calls Gwen “Jenny,” likens their situation to the disastrous love triangle in the Arthurian legend) but the romance and the tragedy would have been more effective if Dirk and Gwen had been admirable characters. As it was, I didn’t really care what happened to them in the end.

Overall, Dying of the Light is impressive and surprisingly sophisticated for the first novel of a young author. If you’re a fan of GRRM, it’s a must-read. Dying of the Light was initially serialized in Analog Science Fact/Science Fiction with the name After the Festival in 1977. The novel was nominated for the Hugo and the British Fantasy Award. I read Subterranean Press’s recent publication which has wonderful artwork by Tom Kidd (both glossy color sheets and black and white drawings). I also tried Dying of the Light in audio (recently produced by Random House Audio) and was pleased with Iain Glen’s narration.

Saw George RR Martin and thought it would be better. The characters act like high schoolers IMO.