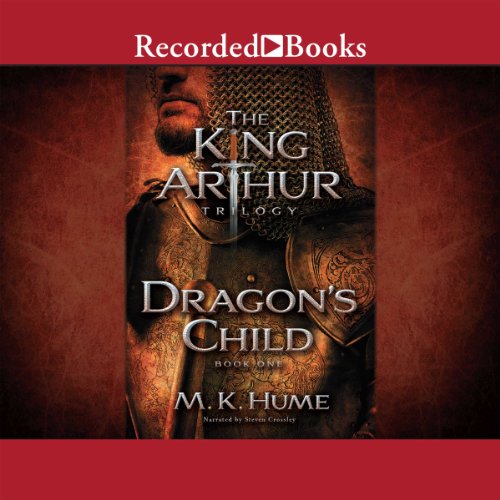 The future of Britain is at stake. In the turbulent times of the Dark Ages, the despotic Uther Pendragon, High King of Celtic Britain, is nearing death, and his kingdom is being torn apart by the squabbling of minor kings. But only one man can bring the Celts together as a nation and restore peace - King Arthur. Artorex (Arthur) doesn't yet seem like the great man he will grow into. We meet him as a shy, subservient twelve-year-old living in the foster home of Lord Ector, who took in Artorex as a babe to protect him from murderous kin. Life has been unremarkable for the lad within the bosom of Ector's family. That is, until the arrival of three influential men who arrange for Arthur to be taught the martial skills of the warrior: blade and shield, horse and fire, pain and bravery. Little does Artorex know that these three men - one of whom is Merlin - secretly hope that one day he will take Uther's crown and restore peace to Britain. As the years pass, Artorex becomes a war chieftain, wins many battles, and starts a family with a beautiful, strong woman. But if he is to fulfill his destiny and become the High King of the Britons, Artorex must find the dying king's hidden crown and sword. Will Artorex be able to leave his family, find the precious weapons, lead the attack against the Saxons, and ultimately prove himself worthy of Uther's crown?

What listeners say about Dragon's Child

Boy, I really mis-judged the synopsis on this. So this drastically different re-telling of the King Arthur legend is much like the 2003 Movie "Arthur" with Clive Owen. It takes a very historic approach to the legend. This method never made much sense to me. King Arthur and the legend, we all know many times over never exists. So applying a historically accurate wrapper on it, creates a very dry, dull novel that uses vague names of the characters that we know. Arthur is Artirex, Kay is Kayus, Merlin is Myrddion Merlinus apparently. These names given to the characters come off as a very false and artificial way of applying a more "historic" and Roman theme to the story.

The author really tries to add the history of Rome and Brittany to the story, involving the earlier tribes of Brits, celts, jutes etc... While I appreciate the effort, and it's a good idea, I wish it would have been introduced much later. The story itself just comes off as brash, abrasively raw, and it seems like it's trying **too** hard to be accurate.

Following this theme of realism, characters are given more human flaws, including things like pedophila, rape, and torture.
In the Once and Future King, Arthur's first quest involves stealing into Morgan's candy lair, and slaying a Griffon.

(I'm going to refer to The Once and Future King as TOAFK from here on out)
In this dystopian re-imagining, Arthur's first "quest" involves stealing into a secret torture chamber set up to capture and rape little boys, while others are forced to watch.

The book itself is written with mediocrity. No characters I really even care for. I think I can attribute this to the stark differences from the original Arthurian legends. Arterex is wed to someone early on, Kayus is a wife beater, and a masochist... Merlin does absolutely nothing.
Seriously, even the teacher/student role of Merlin and Arthur has been wiped out, and Merlin's role of teacher has been replaced by some swordmaster. Again this makes sense in the setting that MK Hume provides but it's just, to me, not Arthurian...

What did I actually enjoy?

Well, I did enjoy the pacing of the novel...to a point. My gripe with TOAFK is that everything happens very quickly. Arthur becomes king without little resistance, and is suddenly given the crown. Now what should be noted is that the Once and Future King is a very different style. The first book of T.O.A.F.K is very child like in it's nature.

That being said, this book drags out the crowning of Arterex a bit more, but it's not even done that well either. The timing is jarring in this book. Suddenly years go by at a time, and we have no idea what Arterex was doing during that time. "Training" apparently to be king. Suddenly when it happens, he's a man who knows how to rule and make decisions. What was great about TOAFK was that during Merlin's tutoledge, it taught Arthur about the laws of men, culture, government, fair rule, justice etc... All the training that this Arterex has in this novel, is some jazz about Kayus beating a horse. Then suddenly, he's making decisions and putting men to death in brutal killing circles.

This book wasn't for me. If anything I would have enjoyed this book a tad bit more if it wasn't under the guise of the King Arthur name...It's such a departure and 'forced' theme of realism it comes off as boring. Perhaps someone who is far more into history over the creative imaginings of a fantasy novel, would appreciate this story more than I.

Wonderful telling of the legend of King Arthur

Prose that sounded like poetry. Lives in all their color. Beautifully crafted ane well told

A Knight in Tarnished Armor

This book tells of the early life of King Arthur as it might have really been...no magic and set at the twilight of the Roman Era and the beginning of the Saxon Invasion. The future King Arthur is singled-out by a group of mysterious travelers who take a keen interest in seeing to his education. These travelers know Arthur's true lineage and his ability to someday grow into a leader who can oppose the Saxon Invasion.

The story of Arthur's upbringing and training is the highlight. The world is also vividly crafted and easy to picture in the mind's eye. I'll admit to being very disturbed by one particularly nasty episode involving a group of brutal child molesters/murderers who are ultimately stopped by Arthur. The description was, perhaps, a bit too graphic and left a bad taste in my mouth for the rest of the book and tarnished the overall experience.

Who was the most memorable character of Dragon's Child and why?

Well so far all of them have been very interesting in this version of King Arthur!

Not even a third through the book and I am looking forward to the next book!