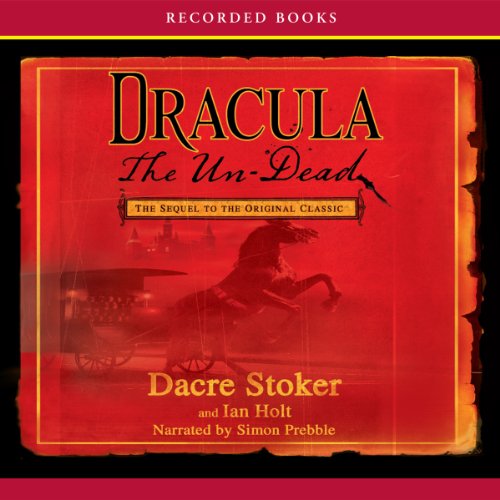 By: Dacre Stoker,Ian Holt
Narrated by: Simon Prebble
Try for $0.00

Dracula the Un-Dead is a bone-chilling sequel based on Bram Stoker's own handwritten notes for characters and plot threads excised from the original novel. Dracula the Un-Dead begins in 1912, 25 years after Dracula "crumbled into dust".

Van Helsing's protégé, Dr. Jack Seward, is now a disgraced morphine addict obsessed with stamping out evil across Europe. Meanwhile, an unknowing Quincey Harker, the grown son of Jonathan and Mina, leaves law school for the London stage, only to stumble upon the troubled production of Dracula directed and produced by Bram Stoker himself. The play plunges Quincey into the world of his parents' terrible secrets, but before he can confront them, he experiences evil in a way he had never imagined. One by one, the band of heroes that defeated Dracula a quarter-century ago is being hunted down. Could it be that Dracula somehow survived their attack and is seeking revenge? Or is their another force at work whose relentless purpose is to destroy anything and anyone associated with Dracula?

"Energetically paced and packed with outrageously entertaining action, this supernatural thriller is a well-needed shot of fresh blood for the Dracula mythos." ( Publisher's Weekly)

What listeners say about Dracula the Un-Dead

I agree that Prebble's narration is as effective as ever;if you haven't heard his reading of Bonfiglioli's books, you really should; he gives the narrator's character texture and real dimension. However, not even Prebble could save this story.
Potential Spoiler Alert Here!! I was a very disappointed with this addition to the legend. Rather than build upon the existing story, the authors have decided on a bit of revisionist pseudo-history - effectively re-writing Stoker's original story by looking back and changing events and motives. The result is a plot that is more Rice than Stoker. The stink of cheap gothic romance is present here. The addition of a love plot and the reconstruction of the story through a different viewpoint aren't particularly artful or particularly effective. I felt myself groaning audibly at some of the lines, the twists in the plot as well as at the shallowness of the characters given the length of the book and the possibilities. Look out for the massive plot mistake regarding who spilled the beans to Stoker (almost like they changed their minds mid-stream) or forgot who they implied did the deed. Mina is a weak character, Jonathan has become something inconsistent with his earlier character, Dracula no longer a decent villain he clearly was before, Van Helsing's character is wildly inconsistent, ugh. I can't go on. By all means listen and add this to your library to know the full truth and to judge for yourself, but do not expect the joy and fear inspired by the original.

Very let down. I'd like my credit back please.

I actually feel bad about making this review but, this book is so horrible that I feel cheated. I saw it in Barnes and Noble and wanted to buy it but knew that somehow it was going to be in audiobook format. I used a credit to get this book and now, I want it back. There is such a difference between the historical Dracula and the character that "Bram" Stoker created. It seems as if Dacre and Holt took more from Coppola's version than Bram's. I'm really let down by this book. I expected more from a Stoker, but then again, talent doesn't always run in the lineage. This is one book I'd like to erase from my memory.

If I could give it no stars I would

SO boring and slow that I could hardly make myself listen to it long enough to form any interest at all in the characters. I managed to slog through to the end and then wished I hadn't because the end was so stupid (like something a high school student would write). Practically everyone in the whole book is miserable and has serious moral failings and it was hard to care about any of them. Don't waste your credits.

First, this is a very entertaining book with a flawless narration by Simon Prebble. I enjoyed it immensely. Less of a sequel and more of a "re-imagining," this novel is built on the premise that Bram Stoker, in his original book, distorted the truth about the ancient vampire's motives and purpose. Prince (not Count) Dracula, it turns out, has been grossly misunderstood. Successful in capturing the mood and tone of the original, "Dracula the Un-Dead" also brings back the first book's principal characters, rejoining their lives 25 years after the events of the previous book. Though the story suffers from a few disturbing inconsistencies and several plot twists and action scenes obviously designed for Hollywood, it is a commendable effort that should please most fans of the original Bram Stoker novel.

I had high hopes for this book but was greatly towards the halfway point of the book. It was very much divorced from Bram Stoker. What I would have liked was journal and letter entries from the characters as Stoker originally wrote. Furthermore, I truly did not like the story. It was unnecessarily gory, it was not in the same vain as the original and the characters were not believable. I felt that this was a sequel to the film, Bram Stoker's Dracula in 1991. None of it made any sense and the authors take on the original story was not what I expected. I forced myself to finish it. It was just not that good and I wasn't happy with my decision to download it. Just not good writing although the performance by Simon Prebble was very well done. By the way, ending...was god awful.

The story is really good. Goes deep into backgrounds and also the likely future.
The characters remain the same with new ones added in.
Overall the technological advances and other aspects have been clearly stated and also a clear storyline.
Narrator could have been better.

So So At Best

The book was a turn off for me. I love the original classic and I felt this "sequel" was just not up to the press. The book is not as creepy, scary, or fun as the original. The wonderful original band of heroes are now framed as drunks, fools, and full of self pity. Dracula is not a monster but a noble hero (come on). The vampires now have new powers such as being able to fly accross countries in hours (why did Dracula then have to take a ship to England in the original) and without many of the original weaknesses. Finally there is a driverless horse carriage (that most of also flown to England) that no one takes notice of in London.

Book is well researched but bound to disappoint fans of the original. Those who have not read the original but love modern vampire literature will find this tame, kind of tiresome, and without much bite.

The book is well researched, well written, and the reader was great but this couldn't save it. Lets face it writing a sequel to a masterful classic without upseting fans was an almost impossible task from the first...

I am disappointed with this story. I feel there were too many unnecessary historical connections to other famous incidents going on in England at the time. I don't feel it was necessary to demonize the woman vampire character and therefore give a heroic spin to the character of Dracula himself. The inclusion of Bram Stoker the man into this story I felt was forced and unnecessary as well. By rewriting everything that was cannon in the original novel and flipping it on its ear I feel diminishes and disrespects the original works by Bram Stoker. This would be all OK in a fan fiction sort of situation. But this is supposedly the official is the official sequel to the original novel and therefore unacceptable in my opinion.

Not a true sequel. Fan fiction at best

First and foremost... while the story uses all the same characters and settings while introducing a new 'big bad' to fear, Dacre spent good portions of his sequel outright saying (not insinuating) that the original Dracula story was a poorly written fiction put together by a failed writer / playwright. Dacre purports to have written this sequel based on Bram Stoker's notes, and identifies that the original release is not the WHOLE story as it was cut apart to make it palatable by readers of the time, but he changes so much of the mythos as to have been a completely different story barely if at all connected to the original by names only.

So, taken as a stand-alone book and not a sequel, the book still has numerous problems. He changes character motivations and attitudes from the beginning of his own book to the end with no real reason for the turn. The book feels more like Dacre wanted to change the original Dracula mythos to be in line with the current genre offerings with more sex, power, and animalistic lust. He leans hard on the crutch of blaming Bram Stoker for being a bad writer throughout, rather than just developing solid motivations for his newly minted versions of old characters. The plot twists can be seen coming from a mile away so the surprises are really just 'yah I know' moments. He uses 'blood memory' as a way to add an invisible narrator to provide back story and exposition. It feels like a cheap trick for telling important details he was too lazy to write in context.

Overall, formerly interesting characters are made flat and boring with the big turn for every single person essentially being 'PTSD made them do it' in all circumstances. His sequel is made more frustrating because if you read his prequel, Dracul, which was written after this book and takes place before Dracula, he changes the mythos AGAIN and doesn't bother to tie it to his own writings for a sequel.

The story itself is fun if it weren't for the weird character motivation changes randomly occurring and the attempt to make it fit the more modern young adult romance mentality associated with Vampires.

This book just took the first, ripped it apart page by page and used it as toilet paper. It's "twists" are so predictable that a 7 year old would see them coming a mile away. It's descriptive and that writing was well enough handled but there was no "saving grace" to this book at all. It has the feel of 2 moping goth teenagers writing this in their room with their hands down their pants. The authors either skimmed the REAL Dracula book or got the jist of the story on cliff notes. Or just watched the movie. The scenes they retell from Dracula are simply wrong, leaving out easy details.

It should be a felony, if you see these authors on the street, to not ridicule them or even deliver a throat punch.

The narrator did a fine job and I'd certainly listen to him in the future.