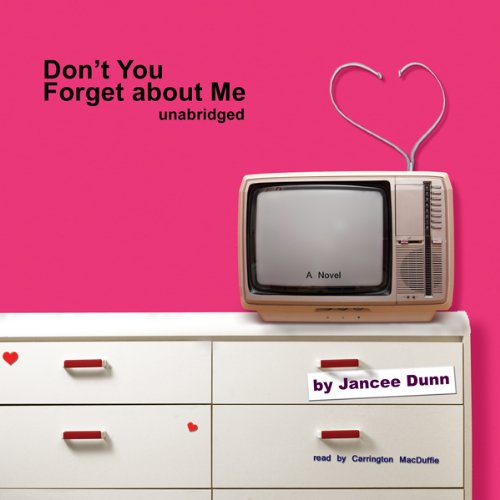 Don't You Forget About Me

Don't You Forget About Me

By: Jancee Dunn
Narrated by: Carrington MacDuffie
Free with a 30-day trial

Jancee Dunn won fans and hearts with her sparkling memoir But Enough about Me, detailing her transition from small-town square to hip journalist in the rocking 1980s. Now she channels her wit and humor into a story of the clash of cultures in the distinctive era in which she grew up.

Lillian Curtis, a 30-something high-powered New York City television producer, finds her past and present colliding when she moves back in with her parents after a devastating divorce. There, in her old room, time seems frozen in 1988, with a Rick Springfield tape still on her dresser and Duran Duran posters hanging on the wall.

After 20 years away, she is forced to confront not only her '80s nostalgia but also all the people she thought she'd left behind, including her high-school boyfriend.

"An inside look at being a celebrity journalist....The chapters alternate between entertaining set pieces...and considerations of what it means to be an aging rock chick." (The New Yorker)
"Blessed with self-deprecating wit, Dunn is an irresistible narrator whose eccentric family, dear friends, and disastrous ex-boyfriends are as entertaining as the megastars she has built a career on profiling." (Entertainment Weekly)

What listeners say about Don't You Forget About Me

This has got to be the slowest moving book I have ever read. The only reason I finished it was to discuss at our book club.