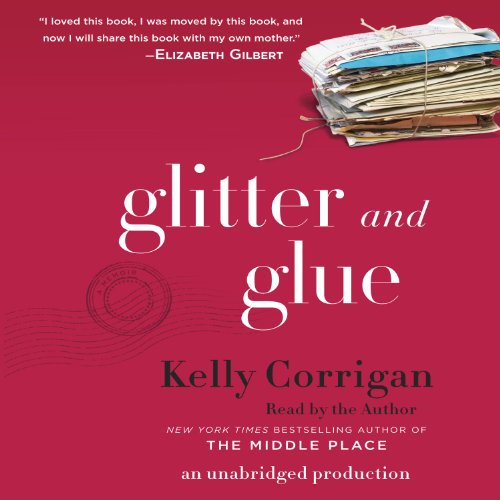 A memoir from the author of The Middle Place about mothers and daughters - a bond that can be nourishing, exasperating, and occasionally divine.

When Kelly Corrigan was in high school, her mother neatly summarized the family dynamic as "Your father’s the glitter but I’m the glue." This meant nothing to Kelly, who left childhood sure that her mom - with her inviolable commandments and proud stoicism - would be nothing more than background chatter for the rest of Kelly’s life, which she was carefully orienting toward adventure. After college, armed with a backpack, her personal mission statement, and a wad of traveler’s checks, she took off for Australia to see things and do things and Become Interesting.

But it didn’t turn out the way she pictured it. In a matter of months, her savings shot, she had a choice: get a job or go home. That’s how Kelly met John Tanner, a newly widowed father of two looking for a live-in nanny. They chatted for an hour, discussed timing and pay, and a week later, Kelly moved in. And there, in that house in a suburb north of Sydney, 10,000 miles from the house where she was raised, her mother’s voice was suddenly everywhere, nudging and advising, cautioning and directing, escorting her through a terrain as foreign as any she had ever trekked. Every day she spent with the Tanner kids was a day spent reconsidering her relationship with her mother, turning it over in her hands like a shell, straining to hear whatever messages might be trapped in its spiral.

This is a book about the difference between travel and life experience, stepping out and stepping up, fathers and mothers. But mostly it’s about who you admire and why, and how that changes over time.

Praise for Glitter and Glue

“I loved this book, I was moved by this book, and now I will share this book with my own mother - along with my renewed appreciation for certain debts of love that can never be repaid.” (Elizabeth Gilbert, New York Times best-selling author of Eat, Pray, Love)

“Kelly Corrigan’s thoughtful and beautifully rendered meditation invites readers to reflect on their own launchings and homecomings. I accepted the invitation and learned things about myself. You will, too. Isn’t that why we read?” (Wally Lamb, New York Times best-selling author of We Are Water)

“Kelly Corrigan is no stranger to mining the depths of her heart.... Through her own experience of caring for children, she begins, for the first time, to appreciate the complex woman who raised her.” (O: The Oprah Magazine)

"In this endearing, funny, and thought-provoking memoir, Kelly Corrigan’s memories of long-ago adventures illuminate the changing relationships between mothers and children - as well as everything else that really matters." (Gretchen Rubin, New York Times best-selling author of The Happiness Project)
"Kelly Corrigan parses the bittersweet complexities of motherhood with humor and grace. Her writing has depth and buoyancy and light. It's a river on a summer day. You slip into the current, laughing, and are carried away by it. Glitter and Glue is a perfect gift for anyone with a mother." (Mary Roach, New York Times best-selling author of Stiff and Spook)

What listeners say about Glitter and Glue

A daughter learning to appreciate your mother

Light reading, but it is beautiful. For daughters and mothers great insight into great love.

Funny and poinant; great for moms with older moms

I saw this book in print but decided that I wanted to hear the author's voice. She obviously imitated her mother's vocal and speech patterns, which I found delightful. Our relationships as daughters are often complex, and Kelly "Corrigan nails it.

She tells of a temporary nanny job while traveling with a friend and making a difference in the lives of her recently motherless young charges. Her desire to be both far from and yet linked to her mom is delightful. Her memories of how her own mom handled things as Kelly was growing up are interspersed with her time in Australia as the nanny.

The book shifts to later in Kelly's life, and the continuing need for and tangled relationship with her mom. Overall I'd call this a love story. No relationship is perfect, but in the end, Corrigan realizes the gift of her mom being the glue in her life, which she can be for her own children.

I will read this again and give it to my daughter who now has a growing family. If you want an honest book, written with humor and love, but not saccharine, this is a book for you.

Loved every minute of the author's narration.

Kelly Corrigan tells a great story about the glue that holds a family together...the mother. Her narration is wonderful; I love her "mother's voice" best of all. I promise you will laugh and cry as you listen.

Give this to your mother for Christmas

Kelly put into words the love between mother and child without being saccharine or sentimental. This book will teach you to love and appreciate your own mother, and if you are a mother yourself, steady your hand in the profound work of mothering.

I could not love this more. What a beautiful and messy story of life, being mothered, and being a mother.

This is the second book I have listened to from Kelly Corrigan- I can’t get enough. She writes with such honesty and outright candor about things we go through as women and moms. Reading her books I realize I am not the only one going through the things she shares in her life. Thank you, Kelly, for allowing your readers into your life and in doing so letting us know it will all be OK.

Absolutely adore her style of writing and keen ability to hone in on all aspects of family. Hope she never stops writing!!!

well done Kelly. <3 I loved your story, so relatable so many pieces I see in my own life, great book.

This is a beautiful ode to her mother. Corrigan does a great job reading it, too.