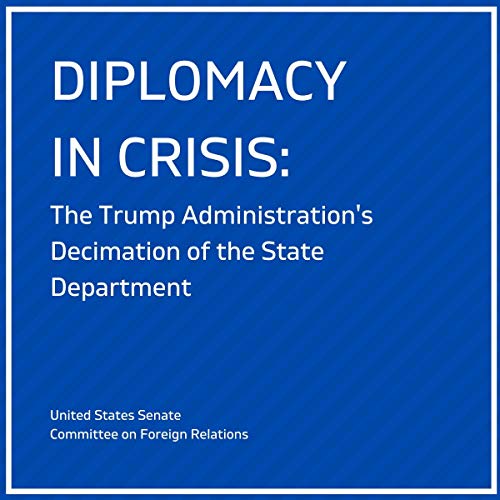 By: US Senate Committee on Foreign Relations
Narrated by: Dan Williams
Try for $0.00

This Senate Foreign Relations Committee Democratic Staff report catalogues significant challenges within the State Department. Employees there have reported that their morale, and their confidence in their senior leaders, have dropped precipitously. This report is based on an extensive Democratic staff analysis of the administration’s nominees, department vacancies, State Department Office of the Inspector General reports and findings, and Employee Viewpoint Survey data from 2016 to 2019.

The first chapter examines the pattern of vacancies and acting officials that has characterized the Trump administration’s State Department, and the impact on US foreign policy. Chapter two highlights examples of the administration’s failure to adequately vet nominees and its practice of nominating candidates who lack the fitness to serve as US diplomats. Chapter three describes incidents of retaliation and attacks against diplomats and career public servants that have had a corrosive effect on morale. Chapter four presents employee survey results from selected bureaus demonstrating that a crisis in morale and lack of faith in leadership at the department has increased to staggering levels. It also shows how the Administration’s response to ongoing racial injustice affects the ability of US diplomats to fulfill their mission. Chapter five sets out a series of recommendations and guiding principles to start the rebuilding that must take place over the coming years.

What listeners say about Diplomacy in Crisis