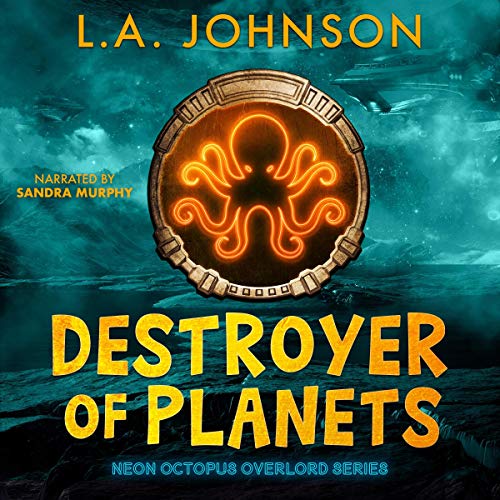 Enter a galaxy full of snarky comebacks and inappropriate use of tentacles in this fast-paced, action-packed space romp.

In a desperate attempt to regain her freedom, Kirian defies her tentacled boss and secretly saves Ari, the human she is sent to kill. Ari is an underappreciated civil servant targeted for her intelligence. She turns out to be one of the few beings left in the galaxy capable of thwarting the Overlord's corrupt plans. She just wants to go back to a normal life, but when the Overlord finds out that she's not dead, all bets are off and she'll have to fight to survive.

Can Ari and Kirian, aided by a few shady friends and a wannabe rock star, find a way to stay alive long enough to put a dent in the evil Neon Octopus Overlord's plans?

What listeners say about Destroyer of Planets

Unfortunately, halfway done and I couldn't connect with anyone in the book, or even follow the disjointed story line!

I still don’t think I really know what this novel was all about, but I had an awful lot of fun not figuring it out. Put briefly, the intergalactic overlord—an alien creature that looks somewhat like a neon octopus—is quietly destroying planets throughout the galaxy. She seems (and I could be wrong here) to be destroying these planets because they have bred at least one highly intelligent person who might somehow make life more difficult for the overlord. As far as I can tell, the overlord is an incredibly lazy person who seems driven by the need to not have to do anything. Her main big bad guy opponent (a giant praying mantis) is also incredibly lazy and wants bad things to happen to his enemy without him having to actually do anything to make those bad things happen.

The laziness of the two chief bad guys appears to explain most of what happens in the novel. They act through intermediaries who hate them. The heroine (the Destroyer of Planets of the title) is trying to get free of the overlord and she has assembled a ragtag group of potential rebels to help her do this. Throw in a rock band playing illegal music and a bureaucratic genius, and you have a cast who seems to at least half-succeed by the end of the novel even though I never understood anything they were trying to accomplish or why this would help them.

So it’s a strange book with a difficult to follow plot, and yet, it’s also a lot of fun. I might just pick up the sequel to see if it helps shed light on what I’ve already read.

I received this book from Free Audiobooks.com in exchange for an honest review.

Slaves of an evil octopus overlord struggle under her rule. An act of mercy, a saved life, a government form filed. Will these straws be enough to break a camel's back?

First let me say the narrator did a good job. Her voice was clear and the characters were easy to follow. At times I did feel I needed to speed it up some.
As for story, it was sorta cutesy. Just couldn't wrap my mind around an octopus as the bad lady in charge.
This audio was given to me free and I voluntarily gave this review.

I liked the story, but absolutely loved the narration. Sandra Murphy deserves to get some high profile audiobooks in the future.

Office space meets the hitchhikers guide to the galaxy

It’s as crazy weird and zany as the review title implies...a purple octopus overlord (all I can see in my head is the purple octopus from toy story 3 but on a Cthulhu scale)...holographic weapon systems, giant praying mantises, galactic coverups, planetary destruction and so much more. Listen to it and pay attention or get lost as it leaps through the galaxy. I was voluntarily provided this free review copy audiobook by the author, narrator or publisher

This one is reminiscent of the Hitchhiker's Guide. I would say it's geared toward a young adult crowd language and insinuations made in terms of the Octopus Overlord and her human male slave... honestly pretty disturbing for me even without much detail. The story was interesting and kept my attention. The narrator was great and was I really enjoyed listening to her. If you liked Hitchhiker's Guide then check out this book.

In similar fashion to Hitchhiker's Guide many years back, this introduces the listener to some memorable characters in a universe fraught with challenges including being at the whim of an impulsive alien overlord. There are a number of interesting scenes and setups over its relatively short runtime and it stays interesting throughout.

Bizarre and zany but highly entertaining..........

Detroyer of Planets is a very difficult book to describe because it is unlike anything that I have ever read. The book is a unique amalgamation of science fiction, fantasy, satire, action and spoof. I was a little confused in the beginning of the book, not due to intricate world building but because the author seemed to have all these separate, unrelated story lines. However, stick with the story because they all come together about 30 minutes into the book, and the action takes off from that point.

The book involves a group of ragtag misfits coming together quite by accident to fight against the evil overlord of the galaxy, which, ironically, takes the shape of a giant, neon octopus. All of the members of this group have been negatively effected by the overlord - whose nickname is soda, and their unofficial leader Kirian, a fierce and ruthless fighter, is actually one of her indentured servants. Along with a reformed hacker turned musician wannabee, several members of his band, and a seemingly innocuous (but secretly brilliant), paper-pushing worker bee, they use their skills and sheer luck to stay one step ahead of the Neon Octopus. The book ends with an okay for now resolution, but the author leaves the door open for many futures challenges for this mishmash of rebel fighters.

I chose to listen to this unusual book because I love the narrator, Sandra Murphy, and she delivers her usual amazing performance with Destroyer of Planets. She has such a pleasing tone of voice and such a smooth delivery, that I get lost in anything that she narrates. I especially enjoyed her portrayal of the Neon Octopus. She made her seem even wackier than the author did....and the author had already done a pretty great job on that score. Overall, I highly recommend this audiobook for any listener looking for an enjoyable change from their usual fare.

Giant insects, brainwashing, and inter planetary travel. I wasn't sure at first if I'd like this book, but it grew on me. I enjoy a motely crew on my space ships, and they are that. I did request this book and have left this review voluntarily.

Enjoyed this audio book very much from start to finish great story line too
I was voluntarily provided this free review copy audiobook by the author, narrator, or publisher.

With the title of this book and the name of the series tending towards the whacky, I was a little dubious about this book even though the premise seemed like an interesting one, luckily this just seems like it was a case of the author being a little heavy-handed with the title as they delivered a solid scifi story with good touches of humour to start this series of books.

While the overall plot is an enjoyable one, the strength of the book for me was in the characters themselves, the steady expansion of Kirian's crew through the book helped with keeping me engaged with the story and added more depth to the main character too.

The narrator also did a good job of helping the book, nicely enhancing it with a good and distinctive range of tones to ensure the reader didn't get confused by the varied cast unnecessarily.