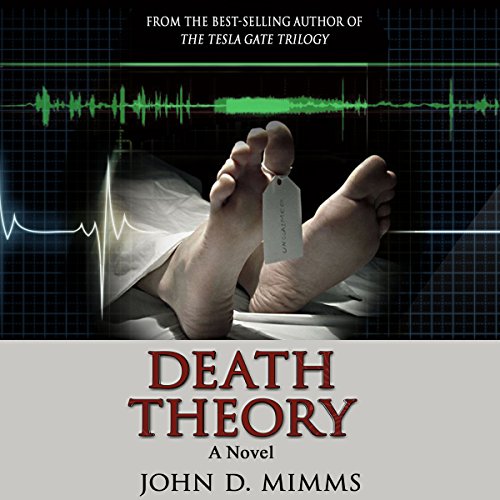 Mankind’s greatest fear is also its greatest obsession. What awaits when we shuffle off the mortal coil of this world? We all have our beliefs based on faith or science, but both struggle to provide a tangible answer. Perhaps it is possible to prove the existence of the soul, to prove it goes on after death.

Following the violent death of his parents, Jeff Granger seeks reassurance that they have moved on. After recording what he believes to be his mother’s voice at the site of the accident, Jeff’s obsession throws him into paranormal research. Realizing that most people are doing it just for fun, Jeff forms his own group. He is joined by Debbie Gillerson, a schoolteacher; Aaron Presley, a mortician; and Michael Pacheco, a grocery store manager. Even though they are all investigating the paranormal for very different reasons, they are all trying to fill an emptiness in their lives. The deeper they probe paranormal theory, the darker their results.

The only way to truly test the Death Theory, as theorized by Aaron, is to monitor a person’s energy at the moment of death. Horrified by the immoral and unethical application, the group dismisses the theory. A darkness seems to follow their investigations, and the police become involved. A former colleague of Jeff’s, a self-proclaimed demonologist, believes a demonic force is attached to the group. The police are not so sure. Evil comes in many forms, as the small group is about to discover.

What listeners say about Death Theory

I completely enjoyed this book. Without giving any spoilers, I’ll just say I didn’t like the ending. Some may think it is a wild and unexpected ending, which it is, but just not to my liking.
I still gave it 5 stars because it is a great listen. I can’t wait to explore more books from this author.
This audiobook was provided by the author, narrator, or publisher at no cost in exchange for an unbiased review courtesy of AudiobookBoom dot com.

'Death Theory' is the best book I've listened to in quite a while. Based on the premise, for some reason, I had lower expectations. I was so pleasantly surprised that this book started out as a character driven story about people who had some interest in the potential reality of the paranormal. I was drawn in immediately because of how well Mimms wrote the characters. This tale takes an incredible turn midway that launches this character driven paranormal story into a full blown mystery/thriller and I can't say how much I enjoyed that! Very rarely does a book take me by surprise, but this one left me guessing in the most satisfying way. I was hooked from the very top to the very bottom; Joe Messina gives a fantastic performance that is very worthy of this great story. I would recommend 'Death Theory' to anyone who enjoys the paranormal genre - it's a really, really fantastic one.

I really loved the story line & the characters. I was attached to the characters right away. The story was very interesting & kept me guessing.

I loved the twist at the end. I had part of it figured out, but not the whole. I loved it!! I felt the story line was solid.

Have you listened to any of Joe Messina’s other performances before? How does this one compare?

I have not listened to any Mr. Messina has read before. This was my first. He was great!! He really brought the characters to life. I will definitely listen to other books he has narrated.

No. I could put it away. I did find myself eager to listen to more. I listen at work & can the majority of a book this length listened to in one sitting.

I just really liked this book. It's not something I would normally pick, but I do love intrigue. I'm so glad I gave it a shot. Death Theory is very enjoyable. I recommend this for a nice & easy listen.

I enjoyed this audio book. I thought it was an interesting and engaging paranormal/ghost story. It was like watching one of those ghost hunting shows on TV except that the main character, Jeff, actually encounters ghosts. It was well narrated and kept me engaged the entire time. I would definitely be open to more from this duo.

This book makes you think about what happens to us after death. Couldn't put it down. I received this audio book for free at my request and voluntarily reviewed.

a good book with lots of twists.

This was a good book. though I would not call it so much of a scary, or horror book. it does have some gosht hunting, but it really doesn't go into detail, or does it get scary. The focus is manly on the characters. And I really did enjoy them. This is very well worth the read.

Narration was good. and I would listen to Joe again.

I absolutely enjoyed this book start to finish it was better than his book The Tesla Gate and different. In this thrilling suspenseful book Jeff forms a paranormal group (Debbie, Presley and Pac) to try and find what goes on after life after and debunking. I not only has paranormal (which I love) murder mystery. Highly recommend you won’t regret it and has great narration. I was given this free review copy audiobook at my request and have voluntarily left this review. THANK YOU!!!

AWESOME THRILLER AND SCARY TOO

The story kept me engaged from start to finish. The ending was incredible!

What other book might you compare Death Theory to and why?

I can't think of a book this one compares to.

The reveal of the culprit. Incredible!

Enjoyable book but a bit long-winded


Jeff Granger is convinced that he can hear his mother’s voice recorded at the place where she died in a car accident. In need of seeking answers, he decides to form a group to discuss paranormal events and maybe formulate a death theory.

This is my second by John D. Mimms. I loved The Tesla Gate, and even though I knew this was going to be a different book, I perhaps expected some of the details that made me fall in love with that book. If you have read The Tesla Gate, be warned, this is a completely different book. Death Theory is a mix of paranormal, humor, romance, and thriller. It was an enjoyable book but I think the mix of genres didn’t sit very well with me. I could have done with humor and thriller, and maybe a bit of paranormal, but there was just too much romance thrown into the mix for me. It’s true that the romance in the story contributed in part to the outcome, but it also made it slow at times.

It was a good story, and the end is unexpected, but it dragged a bit at times, and I found it, in general, a bit long-winded.

Joe Messina’s narration was really good, with excellent character interpretations and a decent voice range. I didn’t know this narrator and I see just a few books on Audible narrated by him. I’m looking forward to hearing more from him.

You can't catch me I'm the Gingerbread Man.

After the death of his parents in a car crash, Jeff joins a series of groups investigating the paranormal in the hope of being able to contact them. But all disappoint so he forms his own, scientific approach, group. The story follows this little mismatch of people and their investigations - a young and nervous woman with nightmare problems, her psychiatrist, an angry young man with mother issues, an older man still grieving his dead wife, and Jeff himself. With instruments to monitor and record atmospheric changes and unheard voices, they visit haunted houses, both public and private. And something strange is certainly happening. But is it really paranormal, proof of an afterlife, or is it something else more sinister?

This is an easy to read book more character based than one of explosive situations, at least initially. At times very humerous, it certainly has it's creepy moments. And the ending is unexpected. Performed by Joe Messina, his voice fits well to the text as he reads at a brisk pace with perfect intonation and well differentiated voices. If there is any fault at all, it is that he could have left slightly longer pauses in his narration at times of scene change.

This is not a story filled with ectoplasm or ghosts coming out of the woodwork but more a thriller and a peek at some well characterized unhappy people hoping for more in life and to prove that life continues after death. It makes a pleasant change and raises some interesting ideas. I requested, and was freely gifted, a copy of Death Theory by the rights holder, via Audiobook Boom. So glad that I did as it was very enjoyable. Thank you for this gift.
Recommended.