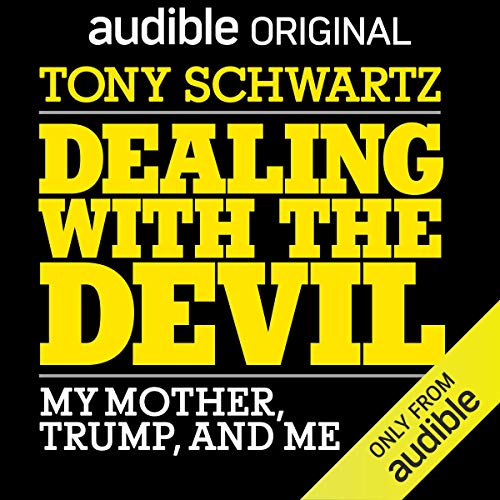 Dealing with the Devil

Pay using card ending in
Switch payment method
By confirming your purchase, you agree to Audible's Conditions of Use and Amazon's Privacy Notice. Taxes where applicable.
ORIGINALS

From iconic memoirs to far-out fantasies, check out our list of the 20 best audiobooks read by their author.
Biographies & Memoirs
Show more Show less

What listeners say about Dealing with the Devil

More Than Just "Art of the Deal"

I have always loved the book "Trump: Art of the Deal", even knowing that Donald Trump had actually nothing to do with its writing. Tony Schwartz, that book's ghostwriter, did a magnificent job creating a interesting compelling narrative about Donald Trump, portraying him as an endearing character with boyish charm (which of course bears no resemblance to the real Trump). The book was a million-seller, and made Trump a household name by the end of the 1980's.

Schwartz regretted his involvement with the book, feeling guilty for having helped create the image that launched Trump into celebrity status. As Trump grew in power, Schwartz viewed his royalties as "blood money", donating it to immigrant groups and other charities to help those who have been badly impacted by Trump. This is the story I wanted to read about, when I got this book.

But this book is much more than that; it's essentially an autobiography of the man, from childhood to today, with great emphasis on his current work with the Energy Project. And his career is certainly interesting, particularly to those who are curious of the man himself. But I was disappointed by the few small chapters that I was hoping would be highlights of the book. Although references to Trump are sprinkled throughout, particularly from the point of view of finding atonement, it failed to meet my expectations. The one small chapter on his 18 months working with Donald Trump could have been (in my mind) multiple chapters and its own subsection of the book. And the penultimate chapter about Trump's 2016 Presidential campaign, and Schwartz's writings and efforts to parry it, was also equally brief.

I gave the book 4 stars, because I fully admit that it was *MY* faulty expectations that were not met; others coming to this book wanting to know about the life of the author, may not feel so let down. What I was hoping for was something like a tell-all "The REAL Story Behind 'The Art of the Deal'", or "The Donald Trump I Was NOT Allowed to Write About" or something along those lines. This is definitely not that. (Although in fairness, you will learn some new things about those aspects, but just not a book's worth.)

Perhaps Schwartz might still be persuaded to write something along those lines, at some point in the near future? However, his grief is quite palpable, even in this book, that I can understand if he could not bring himself to do so. As I write this, the election is just around the corner, and if Trump loses (fingers crossed), then window of opportunity may already be too late. If Trump wins re-election, then I suppose Schwartz will have more time (assuming he, or any of us, can stand the next four years).

So yes, 4 stars overall. Great performance (5 stars), but the story not as much (only 3 stars), as this reader felt that much less time was spent on the more interesting parts of his life, relative to the rest of it.

Loved this book. I was reluctant to read any further books on Trump besides Mary Trump's book, but this one was included in my membership so I decided to give it a try. A lot of what Mary Trump wrote about Trump shows up here, like his relationships (or lack there of) with his children and his cheapness when it comes to money. But this book also offers Schwartz' path to redemption, which was a nice touch.

it was a waste of my time

This book is packed with content worthy of ongoing thought and and analysis. His courageous self revelation is inspiring and full of hope, with challenges to future work on myself!
The Trump angle was woven in deftly with the influence of our personal trauma. This author is very smart and insightful. The book attacks the question of life from yet another direction and dialogue but with an underlying message shared by many disciplines. I enjoyed it and it will be with me now.

the story has nothing to do with Trump, just using his small experience with Trump to promote a book about himself, what a weenie

Lessons from a human. A raw introspection, beautifully told and courageous. I thank the author for his honest recollections and his ability to share his lessons and inspire the listener to examine our own possibilities for forgiveness.

Dealing with the Devil

After hearing Mr. Schwartz's confession so to speak, he probably would find life more enjoyable over all if he could just forgive his mother and move on. I've personally found that some faith and hope work wonders.

Somewhat interesting but not currently relevant

This Audible Original provides limited insight to current events. It is an interesting story but does not expose Trump as fully as the hype leads one to believe.

One man’s spiritual rags and riches mirrors many of us who are on the similar path, yet still haunted by unraveling emotional trauma in our psyche.

Honestly it’s not to project to our parents , Trump or any one else. They are just mirrors to evoke ‘uncooked seeds’: our evolutionary genetic make up.

Meditation is a kind of regress therapy; if we could all regress our wound beyond this generations, we found our answer. The author explores this unconscious path in such a brutal honesty fashion that inspires me. I completed reading in one day & cant help it going back listening it again & again.

Re-listening his work brought so much clarity to my own life journey. Thank you

Not for me, I tried to get engaged, but just couldn't. It is a short listen though, so if you're interested in the topic, it's a quick one.

More about the guy than trump. Depends what you want to hear about. Wish I hadn’t bothered.

Compelling and insightful. Written with honesty and full of interesting topics which I will research further.