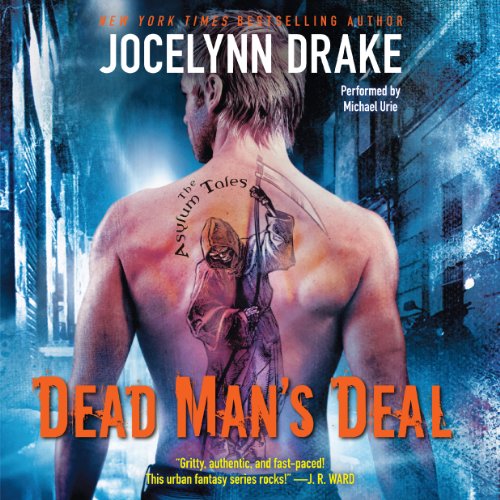 By: Jocelynn Drake
Narrated by: Michael Urie
Try for $0.00

Wizard and tattoo artist Gage escaped the dread Ivory Towers, but no one can outrun his past forever. The wizards know Gage is using forbidden magic, and they will stop at nothing - even destroying cities - to stop him... and the nascent human uprising.

Audio Rating: 4.00 (not part of the overall rating)

NOTE: I did originally get this from Edelweiss but did not download it in time for review. I purchased my own copies through Amazon/Audible.

First Thought when Finished: Dead Man's Deal by Jocelynn Drake was excellent! This series is now on my must buy as released list!

Story Thoughts: Oh Gage!You are the king of getting yourself tangled up in the most impossible situations. Granted you always do it because you want to protect those you love BUT man this time you got yourself tangled up in all sorts of madness. Dead Man's Deal is all about what would you do for the people you love! The fact is, Gage will do anything for them. There was tons of action, suspense, and moments of "oh crap". This series is shaping up to be one of my favorites!

Character Thoughts: I love the characters of The Asylum Tales. Gabe, Bronx (wasn't enough of him), Trixie, Sofie, and Gideon. They are where Jocelynn Drake SHINES! You care about them! You root for them! You cry and scream at them! Overall you just want to become part of their world and hang out with them. I really do love them all! In Dead Man's Deal though it was Sofie who made my heart grow 10x!


I love Michael Urie's narration of Dead Man's Deal (with the exception of his voice for Trixie). He is spot on with Gage, Bronx, Sofie, and Gideon. His pacing is fantastic and the emotion is perfectly suited to the story. Trixie, the voice for her is just a little to over the top for my taste.

Final Thoughts: I need the next one NOW!

Another Great Story in the Series

The Set Up:
Gage was outted to his friends as a warlock in Angel’s Ink and now not only is Gage in danger of the White Tower but so is his friends and family.

Reaver, the dark fae mobster in Low Town is blackmailing Gage with the threat of doing harm to Bronx so that he has to work for him. So not only does Gage have to worry about the witches and warlocks he has the glorified thug on his back too.

Then there’s Trixie’s pass that comes to town and the Elves’ of the Summer Court is threatening to take Trixie back home so she can be the King’s baby maker.

Gage is doing is best to run his tattoo shop, The Asylum, keep himself alive and protecting his loved ones. All while trying to solve the Elves’ of the Summer Court’s baby making problem. It’s just another Tuesday, what could go wrong?

Gage really steps up his game in the magic using way. He already owes one year of his life because he killed someone with magic in the last book. How many years can he rack up?

Issue(s) I had:
NONE! I’m loving this world and these characters.

The Narration:
It took me a little while to get into Urie’s narration of the first book, Angel’s Ink. But now I can’t see anyone else doing the narration. He does a great job with pinch, timing and he is Gage! I still wish he would do something a little different with Trixie’s voice but she is the only character that’s not perfect IMO.

Final Thought(s):
I’ve really enjoyed seeing a story through Gage’s POV. I’m going to seek out more UF series with male main characters. I think I’ll revisit the Sandman Slim series and give Harry Dresden a go while I want for the next book in The Asylum Tales series by Drake.

Will I continue this series?
YES! I can’t wait for the next book. Really, when’s the next one coming out? I know that Dead Man’s Deal was just release but I need more Gage!!

Looking for Recommendations
Do you guys have any favorite series with a male main character? Let me know in the comments.

Can wait for next in series. Hope it is very soon.

Can wait for next in series. Hope it is very soon.

Great start will ther be more?

to good and to bad she won't continue Audiobooks

Gage is my favorite character because he is witty and sarcastic!

Which character – as performed by Michael Urie – was your favorite?

I don't believe in spoilers so I rarely write anything about the actual book. I just give my opinion whether or not it is worth buying. In my opinion I feel this book is worth buying because of the narration alone. The story drags on at times, but the narration by Michael Urie is fun. I thought the female voice of Trixie sounded like Adam Sandler in the movie Jack and Jill and it made me giggle. And the character Gideon sounded like Clint Eastwood, but I loved loved loved the sarcasm of Gage that was captured. I was pleasantly surprised when I googled Michael Urie and saw it was the guy from Ugly Betty. I loved that show and him on it, and I love his narration. I will buy any book he narrates. Again, it is a pretty good book but does drag on at times.

Good but could be so much better....

What made the experience of listening to Dead Man's Deal the most enjoyable?

I really enjoyed Gage's inner turmoil and a glimpse into his past to appreciate the story-line.

Gage. He seems the most "developed" of the characters in this book. The rest are pretty much caricatures.

GREAT with male characters, the females...not so much. His voice and inflection made the women all sound "mentally impaired/deficient",, the writing added to this; the women were simply not written as "actual people" outside of the "big tit", ""big eyes" & "long blond hair" BS. So, altogether, not completely the narrator's fault..still, he could at least make them "sound" less clinically retarded/slow.

I wouldn't make a film of this. It's a "fun/quick" read/listen, but not much else.