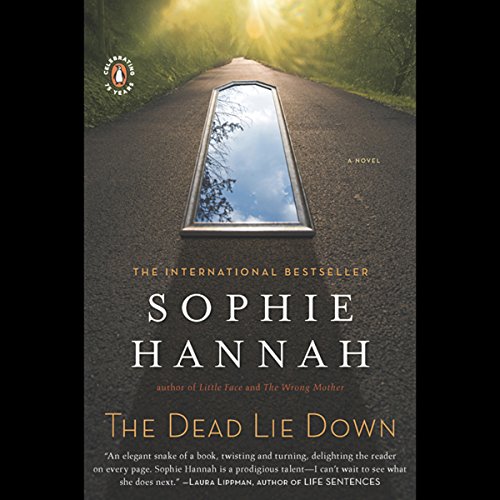 Featuring the return of Sergeant Charlotte "Charlie" Zailer and DC Simon Waterhouse, The Dead Lie Down is another sophisticated, addictive listen from the new mistress of the page-turner.

Ruth Bussey once did something wrong - horribly wrong - and was nearly destroyed by her punishment. Now, she has tentatively rebuilt her life and unexpectedly found love with a man named Aidan Seed. But Aidan also has a secret - he killed someone years ago, a woman named Mary Trelease. Ruth's horror turns to confusion when she realizes that she knows Mary Trelease, and Mary is very much alive.

What listeners say about Dead Lie Down

The Dead Lie Down

The story line is great. The author did an excellent job of painting a mental picture of what the reader/listener should see in their minds eye. The narrator had an excellent and very pleasant voice that was appealing to me as a listener. The one drawback for me was that I could not easily keep up with which character was speaking. I wish the narrator had changed her voice or inflection to indicate the different characters. If you don’t suffer from needing to hear different voice inflections for different characters you will thoroughly enjoy this book. Even if you do you will like the plot and pace of the story.

Not my favorite Sophie Hannah

There were a few things I didn't like about this book, including Charlie acting sort of unrealistically in a whiney way. But the worst part was the on-and-on-and-on about art. Maybe I'm just not a super art-lover - but the characters were droning and redundant and I actually considered just not finishing the book. Too bad because many of Hannah's other books are fabulous.

Oh my god! I have had a string of poor stories and narration here. This story is so difficult to follow, and the pacing is very slow. Although the end picked up a little, most of the characters were uninteresting and boring. I'm not sure if the author liked any of them.

The only reason I did not completely abandon it is because I had nothing else lined up that I wanted to read more.

Most of if flew right over my head.

Great story with twists and turns!

What did you love best about Dead Lie Down?

The story line and the interesting twists and turns were great, especially the psychological mystery. The narrator's voice was pleasant as well.

Although I've read a lot of Sophie Hannah's stories, it's tough to pick a favorite character! I'm very familiar with Charlie and Simon, but I'm not truly fond of either of them in particular. I tend to enjoy the characters they interact with the most. In this story, I was intrigued by Mary Trelis (even though she is not by any means "likeable") and I liked Ruth... but I was a little disappointed in Ruth's opinion of her morality-- she thought she was nothing like her parents but she had a similar way of placing judgement on moral topics that she deemed "right" or "wrong". I also really liked Saul because he was a sweet, protective, grandfather type.

Have you listened to any of Elizabeth Sastre’s other performances before? How does this one compare?

First time I heard this narrator (and my first audible book) and I liked her voice.

Great read if not great literature

The only reason I gave 4 instead of 5 stars is that it's not great literature. I do recommend it highly because it's a grand mystery! Filled with impossible coincidences, not the least of which is how so many psychotic people are connected, this is still a creative, involving story. It's fun, compelling and keeps one guessing with wonderful characters and wit.

Would you try another book from Sophie Hannah and/or Elizabeth Sastre?

Which character – as performed by Elizabeth Sastre – was your favorite?

Do you think Dead Lie Down needs a follow-up book? Why or why not?

No, I think the plot was odd and too drawn out. I lost interest waiting for the story to develop. Too little too late