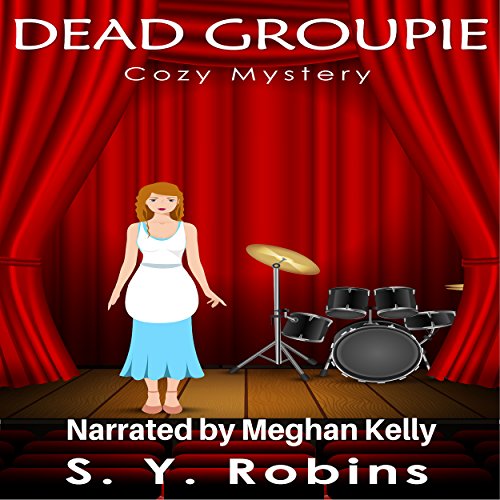 After a long move, the drama of settling in, and the almost foreign world of New York after living her whole life in Tennessee, Jenny is having a hard time adjusting. When she takes a cooking class to get her out of the house and meet new people, she never expects to be offered a place in a cooking competition, or that she had become a murder suspect!

When Jenny's husband's old flame turns up dead after a scene is made at the competition all eyes turn to Jenny. But all is not as it seems and maybe that old flame was more of a fling? And perhaps that fling wasn't even that much? As Jenny struggles to introduce good old-fashioned southern cooking to the competition in the north she has to fight two battles: one for a trophy and the other for her freedom. Will her husband, Derrick, be enough to get her through one of the hardest battles of her life, or will duplicity and a whole lot of crazy be more than Jenny can defeat?

What listeners say about Dead Groupie

The audiobook is a short one, I listened to it at one time from beginning to end. It was entertaining. The narration was really good

Would you listen to Dead Groupie again? Why?

I generally don't like to read/listen to books more than once. I have maybe 50 books in my collection that I would read again.

What other book might you compare Dead Groupie to and why?

I don't know of any, as this is not a genre I read a lot of, but I do like books about music and musicians, which is why I chose this one.

I just loved the strength of the characters that was brought to life by their voices. She did a fantastic job.

I liked the interesting premise involving the cooking contest that brought the main characters to confrontation.

I enjoyed the short story. It was a nice change of the type of character. A mother of young girls who was not complaining, but was happy in her life! She loves her husband and daughters and is a good mom. There was not much mystery to it. Yes, someone was killed and we eventually found out who did it, but it could have had greater depth. In defense of the story, it was a short story and only an hour long so not much time to get into a lot of depth.

I was most interested in the murder and why the person killed the woman. The least interesting part was all the depth of the cooking and the food on the table.

Meghan Kelly has a very pleasant voice that is easy to listen to! I feel the voice was best as the lead character, the mother/wife.

I would not pay to go see it in a theater, but I might pay to rent it or if it came on TV.

Good little story about a country western singer and his wife who are accused of a groupies murder, but all works out good in the end. I received this audio book for free and I am giving my voluntary review..Meghan Kelly does a good job narrating.

This story was very cute and the narrator did a good job. I really enjoyed it.

Cute cozy novella. Short but sweet. Good characters and good writing. Narrator did a great job I received a free copy and left my honest review

A move to New York can be over whelming and to get out decided to take a cooking class. Her husband wants her to be in the competition. She becomes a suspect when a groupie of his ex shows up and now dead. Good plot and narration. Given audio for my voluntary review

Fun! But Not As Good As Nail Varnish

As a young family begins preparations for Christmas, the young ones are left at home while their mom and country music star dad go on a little getaway. As it would happen, there is a cooking contest at the hotel where they are staying. After a bit of a niggling, Jenny is talked into (by husband, Derek) entering the cooking class. If this were my husband the book would be called Dead Husband, not Dead Groupie, for turning a weekend getaway from the kids into more cooking, entering a holiday feast competition.

While they are there a groupie from years ago shows up, all is well until the next day when the groupie is found dead. How will this affect their relationship and Jenny – because she is the most likely subject suspect.

I really enjoyed the book Nail Varnish by the same author. It was quirky, funny and I actually snorted while listening to it (I know, not very attractive). This was definitely no Nail Varnish. I did not care about the characters, the mystery, or the eventual outcome.

Meghan Kelly performed both of these books (Groupie & Varnish.) Meghan Kelly is the best, unfortunately even her perfection was not able to keep me interested. By no fault of hers,

*I received this work in exchange for my review.

Hi~I find that reviews help me, especially new authors or performers. If you found this review helpful, would you take a moment and select "YES" below?

Feel free to follow me on audible.com. I review from most genres.

Authors, publishers and narrators, please feel free to take my review to any other media that you would like. Thanks!

Loved this sweet and short cozy mystery. I enjoyed the relationship between Jenny, Derrick and their children as well as the mystery. I also liked the way the narration was done - really brought the story to life!

Good story but could've been longer

The fact that it was a cooking murder mystery really interested me, however, it was too short and felt like it was a little hurried. There were no suspects set up for the reader to wonder if they were the culprit or not.

This story concept was great I would love to see more from this author. I was provided this audiobook at no charge by the author, publisher and/or narrator in exchange for an unbiased review via Audiobook Boom.