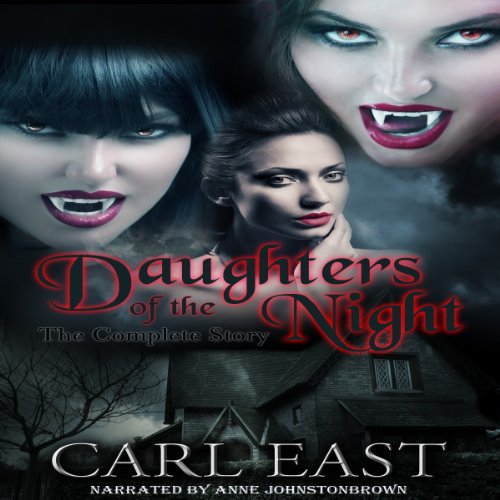 Daughters of the Night

Daughters of the Night

Daughters of the Night: The Complete Story

A straight-laced accountant meets his match when he goes to the count's home and discovers the hidden assets of the three vampire women who live there. Their clothes come off and their mouths go down as they swallow every deposit he makes into their willing mouths. What do a few bites matter, when he can pump their nubile bodies and balance the books to his complete satisfaction.

The girls are at it again, this time they take the innocence from a young electrician. A young man who is so naive, he finds it hard to interact with these vixens of seduction. They also have a gang of thieves to deal with, and deal with them they do, in their usual seductive manner.

When a traveling sales representative arrives on the scene, the girls show him a good time. They like what he has to sell and everyone is satisfied with the outcome. The second story revolves around Rebecca, who volunteers to give blood to the succubae. She can't bear to see her friends suffer and receives a lot of attention from these strange but powerful spawns of Satan.

When the girls reminisce about past conquests, the revelations that are brought to light shock the others. Samantha tells of a night never to be forgotten, with more than one partner. Rebecca tells of a seduction that occurs in a store and Jessica scares them with her tale of self-defense.

When Satan appears on the scene, the reason why he needed the blood from one of the vampires becomes clear. What happens next could very well change Rebecca's life forever.

The first story finds Rebecca's powers of seduction evolving into new succubae abilities. The first of two new gifts will be put to the test when a beautiful woman is compelled to visit the house. The second tale unravels the mystery of the lusty doorknocker and the count's close connection with how it came to grace the entrance to his home.

When Rebecca gets a little carried away with all the testing, something both amazing and scary happens to the girls. The Count is worried that this could change things and that they might have to move on. In the meantime, Shirley calls again, only this time she's not expected. Just, what is going on here?

When the count suspects that someone is spying on them, Rebecca suggests that they spring a trap, to find out with whom they are dealing. The count agrees but when it's all over, he wants to take the girls on a trip back to his ancestral home, the birthplace of Count Dracula.

This tale is graphic in nature and is meant for adults only.

Author's Note: The title Daughters of the Night refers to vampires and not actual daughters, as in blood related. Enjoy.

every story by Carl East that I've ever read or listened to has always been well written, sexy, and always makes you fantasize about being one of the lucky protagonists experiencing all the wild sexual adventures and situations he describes. this story of vampires and succubi was very sexy. the narrator had a very pleasant voice and enunciated very clearly. A very pleasurable listen.