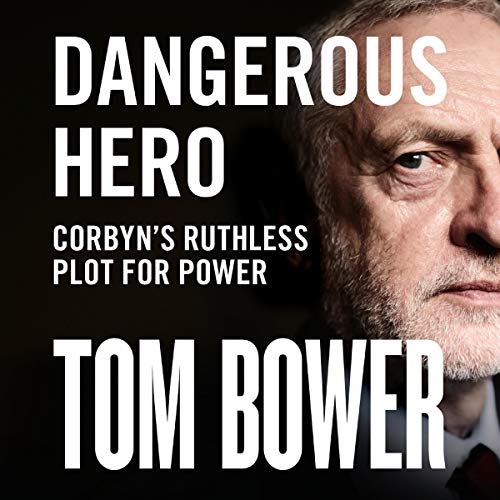 A gripping expose of the man, his politics and what Corbyn in Downing Street could mean for Britain.

After four unremarkable decades in politics, Jeremy Corbyn stands on the brink of power. Until his surprise election as leader of the Labour Party in 2015, this seemingly unelectable oddball had not been a major political player. Since then, Corbyn has survived coup attempts and accusations of incompetence that would have felled most politicians, including grave charges of anti-Semitism, bullying and not being the master of his brief. Despite these shortcomings, as the Conservatives rip themselves apart over Europe, he is likely soon to become Britain's Prime Minister.

Yet this hero of the far left has done his best to conceal much of his past and personal life from public scrutiny. In this audiobook, best-selling investigative biographer Tom Bower reveals hidden truths about Corbyn's character, the causes and organisations he espouses and Britain's likely fate under the Marxist-Trotskyist society he has championed since the early 1970s.

Based on eyewitness accounts from those who have known Corbyn throughout his life, the audiobook asks whether a Labour government led by Corbyn would transform the country for the better. Has capitalism, as he argues, run its course, and would our lives be improved by socialism? If so, what is Corbyn's brand of socialism? The same as that experienced under successive Labour governments since 1945 or something more extreme? Will his advocacy of more debt, tax hikes and renationalisation reproduce the fate of Venezuela as championed by his own hero Hugo Chávez? Is he a reformer or a revolutionary? Will he deliver a glowing new era or catastrophe?

His supporters damn every opponent and critic, calling them 'traitors' or worse. Does this aggression, and the accusations that paint Corbyn as an entrenched anti-Semite and misogynist, override his image as an authentic 'good bloke'?

Many are excited by the prospect of Corbyn’s arrival in Downing Street. Others believe that Corbyn as Prime Minister will prove to be a dangerous hero.

"The book every voter must read." (Mail on Sunday)

"Funny and devastating, it stands as an indictment of both the Labour Party and a political system that allows an individual such as Jeremy Corbyn to come within shouting distance of the levers of power in this country." (Daily Telegraph)

"The most compelling in-depth study so far of a man whose head is unusually difficult to get inside." (The Guardian)

So bad, it's almost good

Hard to review this as I really enjoyed all the bad things about it. The bit where Cat Stevens somehow becomes a Labour MP or where the author hints Corbyn tried to get Iran to nuke Israel are good. As is the part where Bower suggests that Corbyn is a liar who didnt have a beard in his younger years and that he'd seen one photo which proved it.
The best part is Peter Noble's narration - he conveys completely the terror Bower clearly feels about a potential prime ministership of a milquetoast social democrat. He sounds nearly in tears that Corbyn wouldnt bomb Iraq or was sgainst tuition fees. An amazing book really for all the wrong reasons.

I was hoping for some balance in this account, having never read any of Bower’s books before.
This is like a long tabloid character assassination.

Th difficulty is that the author is so intent on portraying everyone he mentions as stupid and corrupt, that he fails to give any evidence to offer credence to his opinion.

I can see why subjects of his other books have taken legal action against Bower for slander.

Despite having persevered my way through all of this, I will have to go elsewhere to try and find out what may or may not be true about Corbyn. The author fails to offer any evidence or corroboration to add weight to his extremely opinionated account.

Don’t waste your money (or credit) on this drivel.

Interesting book with research from people who knew Corbyn, but ruined by comments about Russian funding of groups without any sources referenced. Is this explained in the hard copy book?

Biased but a must read

I think this book has been written with a very large anti Corbyn slant - so Corbyn is not materialistic - that’s good surely and a few other things that the author has put as negative - however I like many of us in this country are politically homeless so wanted to find a bit more about the alternative to the tories and I have to say what I read has terrified me - even if this lot only got one term the damage they could do to this country would be catastrophic - I personally would like to vote labour but will not under this regime - some of the content of this book should be in the wider domain as it really is very frightening.

Every Uk voter should listen to this book

Irrespective of which political party people support, in order to make an informed decision how to vote at the next general election, they really should listen to this book. It is well researched, very well written and highly informative.

I have a long-term interest in extreme politics and the people who promote such ideas. As such I have read a lot of biographies about Communists, Anarchists, and Fascists. With this background in mind, I think that Tom Bower has offered an accurate image of Jeremy Corbyn. Sadly, though, that just makes this book deeply frightening.

Corbyn's life, as reconstructed by Bower, follows a typical extreme-left trajectory. An ideologically insulated upbringing leading to his being fundamentally out of touch with normal life; a zealous 'ends justify the means' attitude to all things; and a general ruthlessness and dishonesty about 'inconvenient' facts. Where Corbyn differs is that he is not an intellectual, at all. He is a Marxist grunt who is surrounded by more politically savvy people and was thrust into prominence by fate. In reality he is basically an unimpressive person. This mystique he has built around himself since being elected leader is all smoke and mirrors.

His supporters are attempting to review-bomb this book or to defend him with the 'but socialism is good so Corbyn is good' argument. The fact is, though, that this book offers an image of Corbyn that can't just be ignored or shouted down. Read it, even though it will keep many people up at night with 'what if' scenarios running through their heads.

The hypocrisy of Corbyn is exposed

To understand the origins and evidence of Corbyns anti-Semitism, and how Trotskists have taken over Labour, then this is the book to listen to. It is very well written and greatly sourced.

A Warning For All

A very interesting read which shows that Corbyn does not care about the poor the country or its people. He is interested in an ideology that should have died out in the 20th century. Racist, sexist and unapologetic Corbyn is hungry for power.
Excellent read and very well narrated

This is a fascinating view of a Trotskyist Marxist seeking, together with his accomplices, to take over Labour, form a Government and fulfil his ideology of turning the UK into a communist state with free enterprise and property nationalised without compensation and an equality of poverty.

In 15 hours and 36 minutes almost every paragraph describes dubious activities since his earliest days.

An appalling story of a useless idiot with 2 E grades at A level
Who has conned a huge number of decent people.