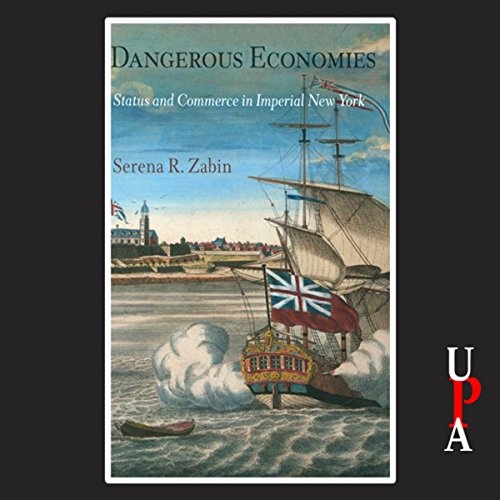 By: Serena R. Zabin
Narrated by: Naomi Jacobson
Try for $0.00

Before the American Revolution, the people who lived in British North America were not just colonists; they were also imperial subjects. To think of 18th-century New Yorkers as Britons rather than incipient Americans allows us fresh investigations into their world. How was the British Empire experienced by those who lived at its margins? How did the mundane affairs of ordinary New Yorkers affect the culture at the center of an enormous commercial empire?

Dangerous Economies is a history of New York culture and commerce in the first two thirds of the 18th century, when Britain was just beginning to catch up with its imperial rivals, France and Spain. In that sparsely populated city on the fringe of an empire, enslaved Africans rubbed elbows with white indentured servants while the elite strove to maintain ties with European genteel culture. The transience of the city's people, goods, and fortunes created a notably fluid society in which establishing one's own status or verifying another's was a challenge. New York's shifting imperial identity created new avenues for success but also made success harder to define and demonstrate socially. Such a mobile urban milieu was the ideal breeding ground for crime and conspiracy, which became all too evident in 1741, when 30 slaves were executed and more than 70 other people were deported after being found guilty - on dubious evidence - of plotting a revolt. This sort of violent outburst was the unforseen but unsurprising result of the seething culture that existed at the margins of the British Empire.

What listeners say about Dangerous Economies