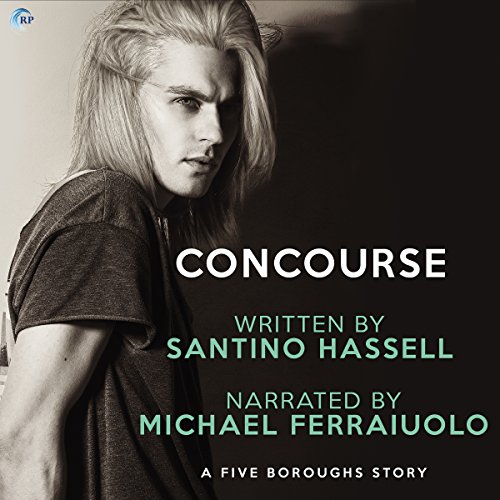 By: Santino Hassell
Narrated by: Michael Ferraiuolo
Try for $0.00

Ashton Townsend is the most famous celebutante of Manhattan's glitterati. The black sheep of his wealthy family, he's known for his club appearances, Instagram account, and sex tape. Most people can't imagine him wanting for anything, but Ashton yearns for friendship, respect, and the love of his best friend - amateur boxer Valdrin Leka.

Val's relationship with Ashton is complicated. As the son of Ashton's beloved nanny, Val has always bounced between resenting Ashton and regarding him as his best friend. And then there's the sexual attraction between them that Val tries so hard to ignore.

When Ashton flees his glitzy lifestyle, he finds refuge with Val in the Bronx. Between Val's training for an upcoming fight and dodging paparazzi, they succumb to their need for each other. But before they can figure out what it all means - and what they want to do about it - the world drags them out of their haven, revealing a secret Val has kept for years. Now, Ashton has to decide whether to once again envelop himself in his party boy persona, or to trust in the only man who's ever seen the real him.

What listeners say about Concourse

I picked this book because I have liked the author’s other work but have not read any other installments of the series. The story was alright. The narration was better.

I liked that Ashton being openly femme and sexual was never anything Val or his friends took issue with. (There were homophobes in the story but they were secondary/tertiary.) I liked that Val’s friends and family accepted him and Ashton without drama for being gay.

I was less comfortable with how nearly every interaction between Ashton & Val, whether the incident was positive or negative, wound up sending Ashton into a self negativity spiral. There’s a secondary character who starts trying to address his negativity, but for some reason, It’s the one thing Val doesn’t see or he doesn’t realize he triggers it. My heart broke for Ashton at the start but when it still happening at the climactic scene, it’s excruciating. Independent of Val’s mixed signals, it seems like Ashton has full blown Rejection Sensitive Dysphoria and his plot should have addressed it more.

The primary plot line is a Big Secret, similar to the Big Misunderstanding trope. It’s my least favorite trope. The secret is that Val used to get paid by Ashton’s family to hang out with Ashton, but Ashton doesn’t know and will be hurt by the news. Val knows this. Heck, half the characters know this. But scene after scene after scene after scene happens with Val thinking maybe this time he might possibly think about confessing this secret to Ashton …and then talking himself out of it. I get that it was a hard thing to admit and that it would, in fact, hurt Ashton. But in the long run, trying to love someone when you won’t be honest, and even come up with a few collateral lies to avoid admitting the big omission, is a fools errand. These are two dudes who are attached at the hip for years and years yet who are convinced their futures will not include each other. They get over that, thankfully.

I am actually ok with some lies of omission. One can’t divulge everything at the start of relations, it comes out over time as trust builds. And not all secrets need to come out. But Val & Ashton think they trust each other & Val’s secret needed to come out. They wanted the future that they feared. Yet coming clean took sooooooooo long that I was over it by the time it happened. Val did damage by keeping this secrets so long because he kept rejecting Ashton in a way that triggered Ash to self doubt. So knowing that every happy scene will end in emotional chaos makes it hard to root for the pairing. Yet I still did. I wanted them to stay together and wanted them to stop triggering each other’s pain but that last took too long for my taste. And their eventual rationale for getting over themselves seemed thin and trite, not foundationally relevant or insightful.

The other thing that gets my back up when a pairing involves people with wildly differing access to wealth is when the poorer person is unreasonably petty about money and the wealthier person doesn’t manage to help them see that sharing is beneficial. I am completely on Val’s side about rejecting Ash’s family’s “job” offer. It’s straight up shady and manipulative. But he won’t accept even birthday gifts from Ashton and probably Ashton would be ok paying for sister Hannah’s tuition, given that they are, essentially, found-family of long standing. While Val gas 3 jobs, we find out that Ashton is pulling in $600,000/year for 6 days work with only one of several marketing gigs outside his family’s money. We can guess that on top of existing wealth, he’s pulling in at least $3M/year, which is comfortable enough even in NYC with a big clothing budget. Even just being friends, Val shouldn’t be rejecting any and all offers of help from Ashton, or not asking Ashton for monetary help for his mom or sister especially when working 3 jobs and bailing out Ashton is grinding him to dust. I am so fed up with pride martyrs! I say this as someone who lost my income and have to let friends buy lunch when we go out. The lunch money is trivial in their budget and they’d rather eat somewhere nice on their dime than exclude me. It feels weird and one sided sometimes but I give them friendship and I get friendship and lunch. It is not worth wrecking a friendship or skipping time together for the pride of not wanting to take “handouts”. (I’m not saying Ash should be supporting an entourage, but his closest friends? Yes, he should at least help some.) And unless taxi driving sparks joy, Val should give up his taxi job now that he lives with a millionaire. Reject the dirty family money, sure, but being a PARTNER with Ash means sharing his money. I did not like how their monetary imbalance was handled at all, but for the rant Val’s trainer lets loose.

So we have a big misunderstanding/secret that is exacerbated by foolish pride about money on one side and rejection sensitivity on the other. While some good stuff happens with setting new life goals that include helping at risk LGBTQ+ youth, Half the story was unnecessary drama they brought on themselves and had the power to change at any time. I’m not suite sure why I stuck with it aside from Ashton being fun and quirky between bouts of woe, and Val seeming cuddly and well intentioned for a beefy boxer. I do think that my level of annoyance at the pointlessness of half the drama/plot is due to my preferences and not necessarily something that would bother other readers. I would rather have had Ashton and Val work together more often, and get to where Ash stops predicting Val’s rejection much earlier or at least have a plan in place for coping. Too much time was spent agitating over the wrong problems for me to really have enjoyed this in full. But there were some good elements - interactingwhe friends and family and hobbies.

Steam: medium. Several on-page M/M sex scenes and several alluded to, with details. There’s a sex party scene but we’re in Val’s POV and he keeps apart from most of the details there.

Narration: I thought it was pretty great, and might have kept me in the story longer than without audio. I couldn’t say how good his Bronx accent for Val is/isn’t but it worked for me. The differing character voices helped keep track of POV and were well done.

this book totally remind me of Paris Hilton's life

MY FAVE COUPLE YET!

I was hoping for an Ashton book and Yay!! It wasn't disappointing. Loved the storyline, the heartbreak, and the sass! The narrator Michael Ferraiulo was the reason I started this series as I love love the passion he puts in his voice to make the story come alive!! The different range in vocals is AWESOMENESS!! Though I also love that Santino does not leave anything to the imagination and provides all the sexy little details along with the reality of his stories!!

This is the first book of this series that I’ve listened to and it has intrigued me enough to try another.

I loved this book. It showed that love can overcome everyting. The narrator was also great, he brought depth to the story. I say "Read it !!".

Great story. Loved the characters and story. - I also thought it was perfect narration by Michael Ferraiuolo.