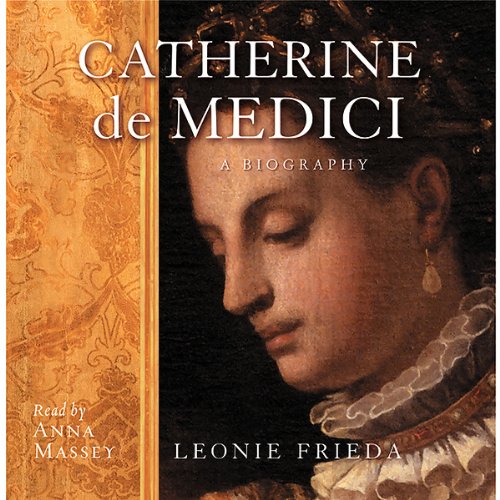 By: Leonie Frieda
Narrated by: Anna Massey
Try for $0.00

Catherine de Medici was half French, half Italian. Orphaned in infancy, she was the sole legitimate heiress to the Medici family fortune. Married at 14 to the future Henri II of France, she was constantly humiliated by his influential mistress Diane de Poitiers.

When her husband died as a result of a duelling accident in Paris - Leonie Frieda's magnificent, throat-grabbing opening chapter - Catherine was made queen regent during the short reign of her eldest son. (He was married to Mary Queen of Scots and, like many of her children, he died young.) When her second son became king, she was the power behind the throne.

Leonie Frieda has returned to original sources and re-read the thousands of letters left by Catherine. There has not been a biography in English of Catherine for many years, and she believes that the time has come to show her as one of the most influential women in 16th-century Europe.

It isn't easy to find much in English, far less on audio, about the Valois monarchs. It was for that reason I turned to this biography and am very glad I did. I knew little of Catherine before listening to this, and now find myself wanting to learn much more about those around her, from her friend and sister-in-law Marguerite, Duchess of Berry, to her nemesis Diane de Poitiers and many more besides. I also longed to learn more about the architecture and decoration of the many chateaux, such as Chenonceau and Anet, and it’s been enlightening to visit the castles virtually, online.

That feeling of wanting to know more is a great treat when reading history, and one can go off on a thousand tangents with the Valois.

I have been appalled at the gross errors and slapdash research in so much that passes for “historical” fiction. The Valois dynasty in particular suffers badly under such treatment, and don’t get me started on the television series “Reign!” If you’re interested in the reality of Catherine’s times, I recommend this book highly.

Frieda's biography is rich and dense with information, and there is never a dull moment for those who love French history. Anna Massey's performance is, as always, outstanding in every way. I only wish the book could have been three times longer, with many incidents gone into with greater detail, so greatly did I enjoy it. I hope you will love it, too, and go on to read Frieda’s biography of Catherine’s beloved father-in-law, Francis I.

This book gives you a pretty detailed listing of who did what during the 1500's in France. I did enjoy the history lesson but next time I will have to prepare a flow chart of names to keep track of who is doing what to whom. This did provide an extremely good insight into the religious wars of the era.

Yes but I would have preferred the unabridged version which I ended up reading.

Which character – as performed by Anna Massey – was your favorite?

Anne Massey is a great narrator all around.

If you could sum up Catherine De Medici in three words, what would they be?

This book was a surprise to me. The author has synthesized all the meticulous research she has obviously done and then presented us with a Catherine who is complex, pragmatic, and strong, but above all, believable. Catherine has remained remote and muted through my other reading about her. I have not been able to understand how she seemed to be so apparently subservient at some times in her life and so controlling at other. After reading this book I feel that I have a good sense of how her character could have developed gradually so that she behaved differently at different times in her life, given her experiences since girlhood and through a marriage that was anything if not peculiar (there were definitely three people in it).

I really enjoyed this book. I would not change it. This is good history and the detail is necessary. In order to understand Catherine we need to also get an idea of the complexity of the French Court where she lived and developed; we also need to have a basic understanding of her religious belives and the religious issues going on in France at the time. She managed to "reign" for her 3 sons who occupied the throne of France in quick succession during times that were nothing if not tumultuous. She also had to survived their poor health and deaths not only as a regent but also as a mother.

I firmly believe that when a narration is good, it does not get in the way of the material and this was the case here.

This is the only book about Catherine the Medici that left me with a feeling of knowing something about this very complex woman who was, above all, a consummate survivor. I think I have made a sort of "peace" with her...I still dot not necessarily like her but at least I can understand her and somewhat grudgingly admire her.

Excellent book. I have not found much on Catherine De Medici and it was just enjoyable to finally hear some of her accomplishment throughout her life time.

Why isn't Catherine known as a she-wolf?

This is a most interesting biography of an extraordinary woman who appeared to be prepared to do almost anything for her children - she poisoned, she murdered and she dabbled in the dark arts for them. She was closely involved in the infamous St Bartholomew's Day Massacre of the Huguenots yet history sees her as the Queen Mother who was the power behind the throne of Charles IX and Henri III and as such a good ruler of France.

I've recently read about Isabelle who was labelled the She-Wolf of France which seems to a bit unfair, yet Catherine who quite clearly could be so labelled is fairly untarnished by history. I guess that proves the point History is written by the Victors!

English history seems very straight forward yet in comparison French history seems ridiculously complicated and convoluted - the time of the French Wars of Religion are no less tortuous and twisted yet thru it all schemed Catherine.

This is a book for history lovers particularly those interested in 16th Century and Tudor history wanting an understanding of French goings on at the same time as Elizabeth I. I personally would preferred to have been in the English Court at this time - far less confusing and far safer!

The author acts as a cheerleader for a psychopathic social climber. The history is highly edited with Catherine given every benefit of the doubt and her enemies are all assumed to be evil.

Definitely enjoy listening to this book. wake the interest on me to keep looking for historical books

What did you love best about Catherine De Medici?

The family and national history as well as how some of the "stories" came to be.

Catherine was neither all good or bad

Have you listened to any of Anna Massey’s other performances before? How does this one compare?

Yes, but I couldn't

I would recommend this to other listeners.

Would you consider the audio edition of Catherine De Medici to be better than the print version?

This book was an interesting and easy way to learn about Catherine De Medici.

This book is a pleasure to listen to. Catherine de Medici and the other characters are interesting and presented in fascinating detail and full colour. It is a scholarly work but accessible to all - full marks to Leonie Frieda. Anna Massey's reading is perfect. Some readers have voices which are difficult to listen to hour after hour and some struggle with foreign words, but Anna Massey is easy on the ear and - so important - her French and Italian pronunciations are spot on. This is one of my favourite audiobooks.

This biography of Catherine De Medici takes you to the centre of life in the 16th century. Anna Massey is excellent as a narrator as she guides through the trials and tribulations of Catherine's life from a child to her death.

I thoroughly recommend it!

Will the real Catherine please stand up.

I'm very pleased to say this book filled my expectations nicely. Well written and well read it shows Catherine De Medici in a totally different light. We still saw the woman made bitter by her husbands affair, but we were also presented with a peace maker. A cleaver and resourceful women who seems to be miles away from the poisoner we had previously known.

Listened to 3 times in a row. Really interesting and easy to listen to. Fascinating woman

A detailed account of an ignoble period of French history, focusing on Catherine de Medici and her blighted family. Beautifully and subjectively written, masterfully performed (albeit with a few mistakes regarding French pronunciation), this book draws one into the perilous chess game that was the Queen's life during the turbulent time of religious division within the kingdoms of Europe. Greatly enjoyable.

Did she deserve her reputation?

I would if they were interested in history.Very informative.

Near the beginning Catherine was treated very badly because of who she was,not because of anything she had done. Also her husband humiliated her by setting his mistress above her at all times.

A romp through history with Catherine

Extremely interesting book, difficult to put down. Beautifully read by Anna Massy, but she speaks far too quickly to be able to assimilate all the many characters and places. I kept getting left behind and had to re-listen to most chapters in order to understand who was who and what was going on. But still very entertaining, enlightening and incredible.