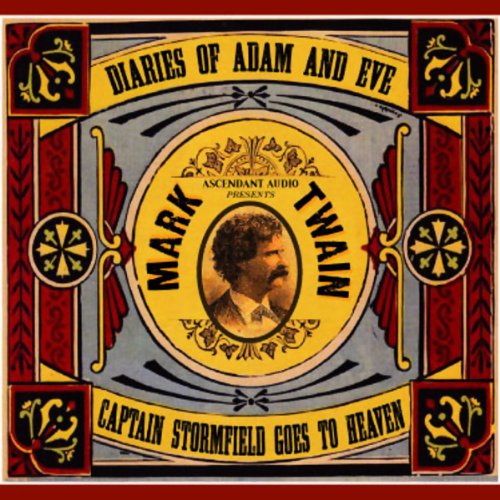 What listeners say about Captain Stormfield Goes to Heaven

It's hard to know quite what to make of Captain Stormfield. It's an unfinished burlesque, a tall tale in the grand Mark Twain tradition; it never quite comes together, but it's filled with the kind of cornpone agnostic satiric ironic philosophizing that only Twain could write. Looked at another way, it's Mark Twain's answer to Dante's "Paradiso," and people who can't make it through one might want to have a try at the other.??

The first big surprise is that Stormfield's heaven exists in the real world. It's impossibly far away - it takes Stormfield about 30 years traveling at the speed of light to get there ??- and it's impossibly large, with room for billions and billions of souls from billions of worlds. But it's three dimensional. No "transhumanizing" here: you could say that Stormfield has his feet on the ground. You COULD say that, except there's not really any ground to stand on.??

The second big surprise is that the first are last and the last are first. Napoleon and Shakespeare walk humbly in the train of people who were lesser lights in their earthly life, but whose potential was greater. In this heaven, you don't have to have been a brilliant general or playwright to??receive the adulation of the heavenly multitudes; ??whether your potential blossoms on earth depends on many accidental factors, and you may not even know you have a particular genius. But heaven knows, and honors you for what you MIGHT have been.

It could have been a grand tale. Unfortunately Don Randall does only an adequate job narrating it. Randall has the right tone but the wrong pace: in fact, the pace never varies, no matter what's happening or who's talking. The dialogue comes off poorly, not because it's read poorly per se, but because Randall never changes tone or voice between the characters, and often doesn't even pause between the end of one character's speech and the beginning of the next. More than once I found myself a bit lost as a result.??

I think this may be the only recording of this story currently on Audible. If so, it might be worth a listen if you're trying to round out your Mark Twain experience. Otherwise I'd wait and hope somebody else takes it up.??

A humorous and entertaining tale of a newly deceased sea captain as he sails to heaven...through space with all of Twain's creative and hilarious descriptions of what is out there....and to the gates of Paradise, which again is Twain's own special creation...a place of surprises but no disappointments. While the story does cause a reader/listener to think and to reconsider his own thoughts about the afterlife, the best quality of the story is that it will make you smile...or even chuckle...or maybe laugh, depending on your own disposition. It certainly did all of those to me.

A thoroughly enjoyable reading of a delightful tale.