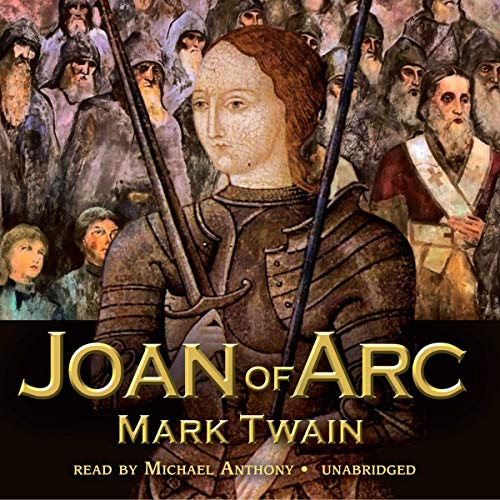 By: Mark Twain
Narrated by: Michael Anthony
Try for $0.00

Very few people know that Mark Twain wrote a major work on Joan of Arc. Still fewer know that he considered it not only his most important, but also his best work. He spent 12 years in research and many months in France doing archival work, and then made several attempts until he felt he finally had the story he wanted to tell. He reached his conclusion about Joan's unique place in history only after studying in detail accounts written by both sides: the French, for whom she raised an army to return the Dauphin to the throne; and the English, who fought the French in the Hundred Year's War and were ultimately Joan's executioners. This is a fascinating and remarkably accurate biography of the life and mission of Joan of Arc told by one of this country's greatest storytellers.
Public Domain (P)1992 Blackstone Audio, Inc.
Religious
Show more Show less

What listeners say about Joan of Arc

Mark Twain considered Joan of Arc to be the best human our world ever produced. His great admiration shines through and can't help but inspire the reader as well. Although the story takes some fanciful flights, it is a marvelous and amazing recounting of a peasant girl leading a nation to freedom. Since French independence was so pivotal to the American revolution, it is a part of our own history. It is a reflection of the best in human nature.

Joan of Arc by Mark Twain

Hands down: This is the MOST comprehensive work on the life of Joan of Arc. Mark Twain knew his subject matter inside and out when he wrote this biography. Without a doubt, I would recommend this title to anyone who is interested in this subject. An excellent listen at 16 hrs. or any amount of time!!!

Twain is one of the five best writers in the English language ever and this work is up to his usual standard. It is beautifully constructed and detailed. The structure relieves any dryness from the history but does not lose any context or content. A huge pleasure to listen to. Naration is clear and well executed.

Well read, good quality audio, but more importantly, wonderfully written. Twain makes the 100 year war come alive. He creates a balance against the heroic Henry V. You walk the streets and understand the zeitgeist. You cheer for the people, disparage the royalty, wince at the church.

I agree with Mark Twain when he says this is his best novel. It was fantastic and I hated when it was over. The description of the battles and Joan's life were wonderful. Truly inspiring.

I have been reading a number of biographies and histories recently. I was raised Catholic and certainly heard of Joan of Arc, but never knew her story and the context. Twain did a wonderful job telling her story and it's a fascinating one.

What an amazing and heartbreaking tale.

What an amazing, and sadly short life. I didn't want to keep listening because I did not want to hear the unavoidable ending, but I was so captivated by the story. I've added another soul to the list of afterlife meetings I'd like to have; Joan of Arc.

The story of Joan of Arc as part of Mark Twain's catalogue is odd, but truly a undervalued and misunderstood masterpiece.
His grasp of the times shows true understanding and his grasp of her saintliness shows true spiritual comprehension.
Pick this one up!

A work of art in every sense. A true adventure.The best book I have ever read.

Great history of an amazing person

This was so well written it could have been published last week, rather than over 100 years ago. Mark Twain had a surprisingly progressive view of both women and the rights of the individual.

This was clearly painstakingly researched and wonderfully enlightening.

Yes, some of the tangents with "the boys" were meandering...and I would have liked to see her characterized as being a little more human from time to time, but overall excellent.

The book is very good but the recording is poor. At times you are told to change cassettes and you can hear other voices faintly in the background. The narrator's french is a bit wonky too.

What did you like most about Joan of Arc?

Great historical reference for any who are interested in learning more about the life of Joan of Arc. One of the most comprehensive accounts I've heard, and this particular audio rendition is top quality. Highly recommended.

fascinating and timeless story of Joan of Arc , but v poor and old recording

Incredible biography of an icon by another icon.

I feel like I know the woman now and that is a privilege.

A true story of courage trust and pride

This story touched my heart as a child and again as an adult in this telling.

France: Be proud if such a one as Joan of Arc

Excellent history based on facts