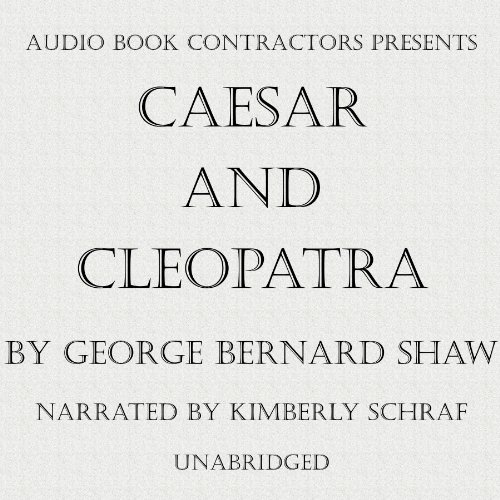 By: George Bernard Shaw
Narrated by: Kimberly Schraf
Try for $0.00

The Emporor of Rome and the Queen of the Nile as only Shaw could have imagined them! He is a self-doubting cynic who is experiencing a mid-life crisis and she is an imperious and impertinent child on the threshold of womanhood. This recording also includes Shaw's alternate Prologue and his post-text notes.

What listeners say about Caesar and Cleopatra

Interesting but more head than heart

Two points to make about this: one is that it's Bernard Shaw; the other is that it's read throughout by the very capable Kimberly Schraf.

Shaw can be funny, serious, tough-minded and sentimental by turns; he can also be alternately captivating and tedious. In this outing he's all of the above.

Cleopatra is not the fading, mercurial enchantress of Shakespeare’s play. Shaw presents her as a charming but hopelessly spoiled 16-year-old girl. There is a tremor at the end, though, that gives a hint of what is to come.

The play comes with not one but two prologues (take your pick), which is about one and a half too many. An afterward provides historical background on some of the points raised in the play.

I've never seen this one staged. If it were done exactly as written - something I suspect would be a financial impossibility - it would be more elaborate than the most expensive Broadway musical. The sets Shaw describes are spectacular beyond belief, with multiple levels, colonnaded porticos, the Pharos lighthouse, a Sphinx (though not THE Sphinx), and a ship at pier. Dozens if not scores of soldiers, guards, and servants dot the landscape.

In this setting, Shaw tells an unromantic story about a young girl with a lesson to learn about ruling, and an old(er) man with a destiny to fulfill. Like much of Shaw’s work, for me it speaks much more clearly to my head than my heart.

It’s also a chaste story. Caesar is more a kindly uncle here than an aging lover, and Caesarion - the child Caesar and Cleopatra had together - does not show up to complicate matters. At the end, returning to Rome, Caesar promises to send her childhood crush, Mark Antony, and this Queen of the Nile dances and giggles like the schoolgirl she most clearly resembles.

As mentioned, the play is read by a single reader. This has a distinct disadvantage and a number of advantages, especially when it comes to Shaw.

The disadvantage is that it lacks the dramatic tension that results from the interplay of different real personalities.

But the advantages, for someone like me who had not previously read the play, are considerable. In a play as crowded with characters as this one, it's helpful to always know who’s talking. (In single-reader productions like this one, it's customary to preface each line of dialogue with the name of the character speaking it.) Schraf helps this along by using slightly different voices for each character.

And with Shaw, you get the benefit of hearing his novelistic set and character descriptions. Shaw put a lot into these descriptions, and they're useful as hints for actors, directors, and designers; but in an audiobook, where you can't see the finished result, the effect is lost - unless, as here, they're incorporated into the reading.

So, not my favorite play (or my favorite by Shaw), but it’s a skillful and accessible rendering of the play.