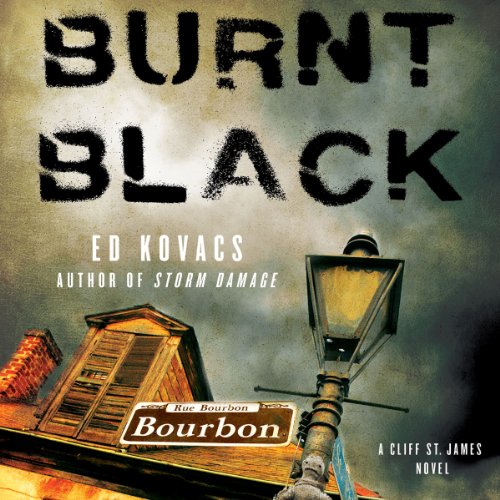 By: Ed Kovacs
Narrated by: David Marantz
Try for $0.00

Cliff St. James returns along with his partner Honey to investigate a baffling series of ritualistic deaths that may be connected to a bizarre secret society, in Ed Kovacs' Burnt Black.

New Orleans Homicide Detective Cliff St. James and his partner Honey are still trying to piece their lives together a year and a half after a killer storm decimated the city. They find themselves probing a succession of unusual deaths that may or may not be homicides.

The investigation not only proves frustrating, but it strains at the very fabric of St. James and Honey’s relationship. The puzzling deaths connected to a secretive occult group seem to only lead them deeper into an unsolvable maze fraught with strange occurrences and brutal death.

When their sleuthing uncovers a connection to a ruthless Mexican drug cartel, a complex murder conspiracy emerges, but with shifting suspects. St. James and Honey catch nothing but bad breaks as they struggle to determine which of their suspects is the killer, or perhaps the next victim.

What listeners say about Burnt Black