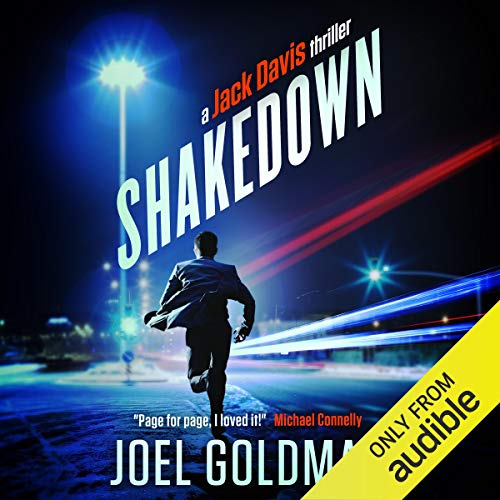 By: Joel Goldman
Narrated by: Kevin Foley
Try for $0.00

Crack. Rock. Crystal. Dead faces stand at city crossroads and sell their wares to the hopeless - the forgotten - in exchange for their souls.

The war isn't overseas. It isn't south of the border. It's in Everytown, USA. FBI Agent Jack Davis is neck deep in a dark urban war and it's not some pansy-ass X-Box Modern Warfare fantasy. He's caught in the crossfire of a war that rages on in the bleak and brutal streets.

And Jack is fighting another war; this one inside his body as a mysterious disorder makes him shake when he should shoot.

Jack's latest case sends him on a dark journey steeped in the stench of death and endangering his daughter. Critical information is leaking - no - pouring out of the case. He can't trust anyone as betrayal buries the truth in a deadly web of deception.

What listeners say about Shake Down

Shake Down is Book 1 in the three book Jack Davis Mysteries series. Jake Davis is a 50 year old FBI agent and team leader five years from retirement in Kansas City who has developed sporadic and debilitating full body tremors which cause him to be put on involuntary leave from his job. He is in the midst of a divorce after 24 years of marriage. His son was kidnapped and killed many years earlier and his problem child young adult daughter is dating a guy (an undercover FBI drug agent) her dad considers inappropriate. Davis is unwilling to stop independently investigating the major crime his team was working on when he was placed on leave. He is sort of dating Kate a divorced mother who is a jury consultant with expertise in micro facial expressions.

The paragraph above merely sets up the novel. The book is an excellent mystery/thriller. There are some unexpected twists and turns throughout the novel. Kevin Foley does a fine job of narration.

Great story and it had me to the end! Joel Goodman is a great storyteller, I highly recommend this book!

It's nice to read a well contrived story, that doesn't rely on foul language, and grotesque
Details to sensationalize. This is a thoroughly
Well written, well thought out, and exceptionally well read book. I will read more
By this author.

A New Series to Checkout!

This was my first book by this author, and I enjoyed the story. It was interesting to have a main character with an obvious disability, yet who was still so passionate about pursuing the case. I thought the pace of the story was excellent, and the character development was great. As this was the first book in the series, I plan on continuing on to the rest go the books. I listened to the audiobook, and the narration was spot-on.

Lots of killing. F word is used a lot. Not a storyline I could continue.

There are some authors that you know you can depend on to give a exciting tale, and Joel Goldman is of them.

The story may have been a good one but I could not get past the "reading in black voice". It was too much.

What could Joel Goldman have done to make this a more enjoyable book for you?

Either have a black person read the black parts or do not used the perceived "black" vernacular at all.

Would you be willing to try another one of Kevin Foley’s performances?

An intricate web is only fully exposed at the end. A well paced, well narrated enjoyable story.