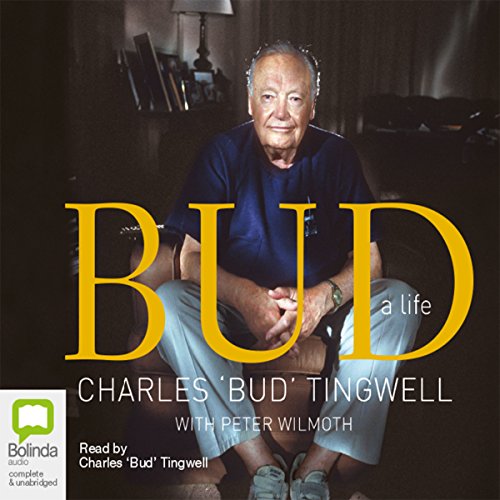 Charles 'Bud' Tingwell is one of Australia's most popular and respected actors. Read by Bud himself, this is a moving account of a life well lived.

Tingwell's career has spanned over 50 years, from glamorous post-war Hollywood, to London in the swinging 60s, to some of Australia's favourite film and stage productions. That a man can star in two films as widely separated by time and distance as The Desert Rats (1953) and The Castle (1997) is surely a sign of extraordinary longevity and talent.

Yet there is much, much more to Bud than his long list of acting credits. Before he ever established himself as an actor, he served in Europe and North Africa in World War II as a fighter pilot with the RAAF. But above all he is Bud the family man, a loving husband and father. He writes frankly of coping with the death of his beloved wife, Audrey, and of how he was to find comfort in his work. This is Bud's story - as wise, funny, captivating and endearing as the man himself.

"A tender, quiet challenge to the salacious big-noting typical of the showbiz memoir....impossible to resist; one succumbs willingly to its modesty and candour." ( Sydney Morning Herald)

What listeners say about Bud

This a a good story read by a Aussie acting icon who has had a fascinating life. He talks of many old actors that could be lost on under 30s or those unfamiliar with early Australian TV. Otherwise well read in the brilliant famous voice of Bud.

The generosity of Bud Tingwell is burned into Melbourne history. His acting, directing and advocacy of the Arts is part of our cultural milieu. Bud offers (in his resonate tone) in this exquisite narrative an up-close-and-personal with a truly enjoyable lilt. From his childhood memories of his grandmother's advice, "that's just people being human" through to his work with the D-generation in "Charlie the Wonder dog" and the "Castle", his warmth and his signature "good will" is in every page. If you miss Bud - this will remind you of why - and reinforce his place in your heart.

I read this book almost 10 years after Bud died and felt a strange sense of loss all over again. My late mother in England who was the same age as Bud was a great fan of his when he was in Emergency Ward 10, so when I migrated to Melbourne and met him when he compered a concert, I was pretty chuffed when he signed a program and addressed it to her. He was a sweet, humble man. When I found this book I was looking for something completely different, but it caught my eye. I'm glad I didn't resist an emotional impulse to use my credit for this book instead of the other thing I was looking for, whatever it was. There's a lot of information in it that would be useful to student actors, but that was quite all right. I was also interested in the technical aspect of his trade.