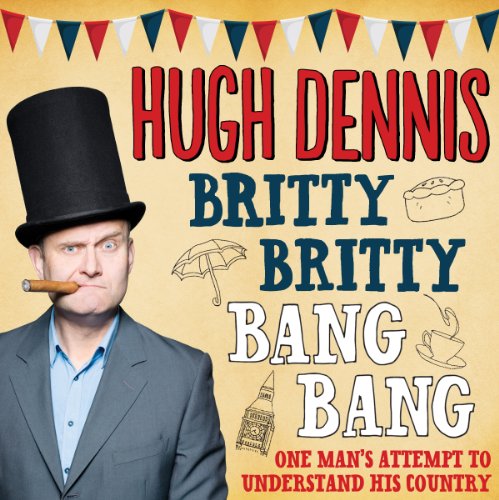 Mock the Week and Outnumbered's Hugh Dennis with an hilarious and insightful exploration of the changing image of Britain and Britishness.

Hugh Dennis has secretly been worrying about what being "British" meant for nearly a decade, ever since his friend Ardal O'Hanlon had told him in passing that he was the most British person he had ever met. Hugh was unclear whether he was being praised, teased, vaguely insulted, or possibly all three - because it has always been very difficult to know how to feel about being British.

And then the London Olympics came along. We gave the world a gleaming new vision of Britain; a smiling Britain of achievement, a Britain responsible for leading the world into the modern era through the Agrarian and Industrial Revolutions, a nation proud to embrace multiculturalism, individuality, and eccentricity. A country where a major politician can dangle helplessly from a zip wire like a discarded straw dolly and gain in popularity, and whose Queen can send herself up and then descend by parachute.

The unexpected legacy of the Games has been a Britain with a new found self-confidence in which we all know how to be British. A Britain which should be embarrassed by nothing and proud of everything, from sheep to chimneys to the Spice Girls to industrial action and what had always previously been described as our "ailing transport network". A Britain which having been pinned firmly in its own half, has dribbled the length of the field, nutmegged the defenders, unleashed a curling dipping shot into the top right-hand corner, scored a wonder goal and is now kissing the badge.

This is Hugh Dennis' exploration of the changing image of Britain and Britishness.

If you enjoy Hugh Dennis' laid-back approach and the light-hearted tone to his voice, then this is the audiobook for you. You will learn a lot of surprising information about Britain and its people through history, and the present day. The clearly defined subjects for each chapter mean you can dip in and out if you so wish. I would recommend this book to anyone.

I like Hugh Dennis, and he does an excellent job of narrating his own book here, as he has done with the tomes of others when drafted in to read BBC Radio 4's "Book of the Week" on more than one occasion.

The idea is a good one - what IS it that makes the British feel that they stand apart? He explores this using a thematic structure - food, weather, sport etc.The content is even interesting for the most part and I learned some stuff I didn't know.

Here's the rub though; it is not an audiobook I'd listen to again in a hurry because the overriding thought I had as I listened along was that I was merely listening to one man's internet surfing results. I had this mental picture of Mr Dennis sat in front of his computer late at night just filtering the results that Google turned up when he entered his chosen search terms.

It's a pity, but I didn't enjoy this book as much as I wanted too. He's an engaging author with a good book in him I'm sure, so I hope that he has another go.

I wanted something light to listen to during a hospital stay. I enjoyed the book and was just what I was after but I think if I had read it when on top-form it would have been less engaging. There were some parts that made me laugh aloud but on the whole is mildly amusing rather than side-splitting.

A man with access to google does not a book make.

A shame, I'm a big fan of Hugh and had high hopes for a good car journey book. He literally reads out entries from wikipedia for the first hour. I don't know what this book is trying to be, it's not a Bill Bryson-esque travel and witticism exercise. Avoid, sadly. Go for one of the Stuart Maconie books instead.

A Great book, interesting, entertaining, factual,fun and one that can be enjoyed more than once.

Enjoyable but possibly a little meandering at times

I enjoyed listening to this and learnt quite a lot about Britains history. I did get a little tired of the meandering from time to time but overall this is a good book to listen to, especially on long car journeys

What made the experience of listening to Britty Britty Bang Bang: One Man's Attempt to Understand His Country the most enjoyable?

I enjoyed listening to Hugh Dennis as his tone of voice carries so much humour with it, and he has great comic timing.

What was one of the most memorable moments of Britty Britty Bang Bang: One Man's Attempt to Understand His Country?

The section on sports is very well put together, and the fact that it is true doesn't make it less funny.

Have you listened to any of Hugh Dennis’s other performances? How does this one compare?

No this is the first time I have heard him, I would look out for any others he did.

One man's mission to understand our misunderstandings

Have listened to Hugh on the Now show and mock the week, so fans of either of those would enjoy this.

A fascinating topic rendered unbearably dull. It's up to you of course, but I wouldn't bother.