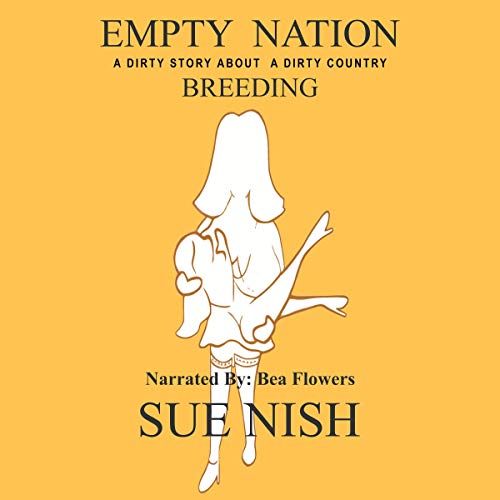 Breeding: A Dirty Story About a Dirty Country

Breeding: A Dirty Story About a Dirty Country

By: Sue Nish
Narrated by: Bea Flowers
Free with a 30-day trial

The Empty Nation series is sci-fi, romance, political satire, and comedy. The story begins 200 years in the future. In this first volume the framework for the entire series is defined with a wildly concocted futuristic plan by the new United States government to control the economic fate of the world (nothing new). The two main characters in the series, Mary & Jane, are bred and introduced to the listeners. Their adventures from birth to preschool are humorous and quite amazing.

But oddly at the same time they’re being manipulated by the US political system and maintain a pleasantly sedated (via government-supplied drugs) state in a surrealistic world. This story has many concepts that are bitter and sweet till you realize you’re reading fiction. The US government in the future is portrayed as an imperialistic, monstrous demon that’s shunned by all other nations. The society in the new America crosses some pretty taboo moral lines supported completely by the new United States Constitution with amendments that legitimize its citizens' lewd sexual behavior.

What listeners say about Breeding: A Dirty Story About a Dirty Country

Holy Cow! Get through the initial few minutes of the audiobook before having preconceived idea of what the book is about...it is a political satire and if your willing to keep your mind open it is certainly an attack on what our society is and appears to value. This story takes a view at the financial crisis, the lack of birth control so women won’t have sex, homophobia, how men’s penis’ are shrinking and men are desperate for sex...so our morally corrupt society looks to create ‘sissies ‘, males with small penis but create a way for workers to have sex with basically genetically created sissies who just have and want sex, are the currency of payment for work..that the public is too stupid to realize what is being done..there is a new social class..those who breed and raise Sissies and those who are Stud Families with men with bigger equipment...that our country will help others in the world only if it is profitable. Horrifying to see this is exactly where in the recent couple years we’ve slid towards...selfish immoral and self serving society. The narrator was perfect in unique voices..humor ridden making fun of society... Be prepared for vulgar language and distasteful and unsettling thoughts! I was given this free review copy audiobook at my request and have voluntarily left this review

This is the first book I’ve read/listened to by this author. This is a book that I had to tell myself I had agreed to review it, so I needed to listen to the end. I am curious where the story continues, yet listening was 80% like smacking my thumb with a hammer and 20% enjoying her witty political satire. I think the underlying story was great, but I found the dialogue very repetitive and excessive. Especially when it came to characters that were teenagers and had grown up in this era of time, i found it extremely unnecessary for the characters to explain the workings of their society and government policies to each other EVERY time they spoke. I would’ve been happy for the acronyms to of been explained maybe a few times (since there were many of them) but not repeated extensively. I think the book could have been reduced by half . There is not any violence but there is swearing and excessive sexual content. Funny thing is, and I cringe thinking about it, but I am curious about the next book. I am undecided if I will listen or not. I am not sure the underlying wittiness is worth listening to all the rest. I understand she is trying to make a point, but I do not think it needs to be driven home so much. This is the first book I’ve listened to by this narrator ( Bea Flowers ) She gives each character a voice but no all are overly distinct. The narration did not allow me to forget I was being read to but the writing of the story would not have allowed that either. I found the repetition over the top. There were mispronunciations, skipped words, verbal stumbles and I could hear noises in the background of the recording. There is excessive sex references and swearing. There is not any violence. There are derogatory comments and labeling for the purpose of making the point to the story. I was given this free review copy audiobook at my request and voluntarily left this unbiased review. Please feel free to comment on whether you found my review helpful.

A irreverent and highly disturbing parody

First off, this being an audiobook, it should be said, the narrator did a wonderful job. My only compliant was a couple of repeats, and, at one point, a dog barking in the background. As the story goes, this is a disturbing parody, detailing the extremity of what life can become given our current political path. In the vein of "Gulliver's Travels," and "The Handmaid's Tale," we get a chance to see the author's take on what can happen if our societal ills are taken to their logical, and even highly illogical, end. Certainly not an outcome any rational person would want, but group-think has a way of causing mobs to accomplish the unthinkable. In terms of audience, this is not a story for the young, so keep the kids far, far away, and keep an open mind, just don't let your brain fall out! I requested a free review copy of this audiobook, with expectation of my honest review. Thank you for allowing me to listen to and review the book!

If you only ever get 1 book , make sure this is it

I received this audiobook free of charge & in return I'm offering my opinion & review which is totally unbiased . Very very dirty but so much fucking fun , I love the sarcasm & the humor . This audiobook pokes so much fun at the sexuality of Americans & is the most sexually ' un P C ' book ever . Once you can see past all the swearing & filthy passages then hopefully you'll realise this is a great work of satire & fun . One little snippet & its not a spoiler because its about 3 minutes in a 3.5 hour book . The government is looking for small dick men to turn them into sissies & install a cunt into them . Then install them into factories & pay the workers in sex , most workers are only working to get enough to buy food & as we know everyone would rather fuck than eat . It sounded like a great idea to help the economy but then the governor of some obscure state asked how do the small dick cunt instilled workers get paid ? The president saved the day , he suggested genetic modified machinery that the small dickers could use . The government all cheered & saluted President Dump , they praised how wonderful it was to have someone as wise as President D . DUMP as their leader . You'll need to get the book to find out if this worked also how the unions reacted , what if a person worked extra , was there a bonus system & did everyone get paid the same ? Plus how do you pay the female staff . The narration is excellent ..

Not bad for an amateur newbie writer

A fruitful and engaging reading experience

Truly a mixed bag of genre’s. I wasn’t sure if I was reading Sci-fi, romance or political satire. But once I got into it, I realized the beauty of the intertwined themes.