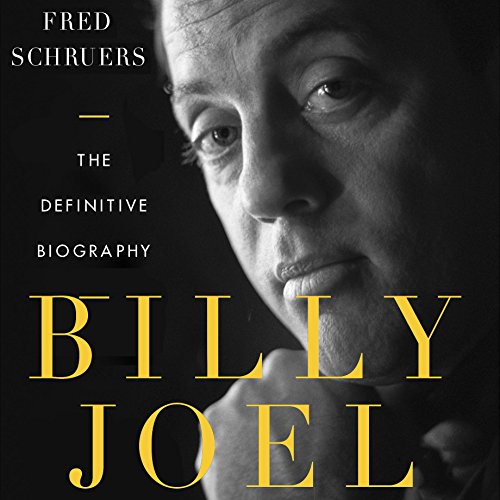 By: Fred Schruers
Narrated by: Kirk Thornton
Try for $0.00

The long-awaited, all-access biography of a music legend

In Billy Joel, acclaimed music journalist Fred Schruers draws upon more than 100 hours of exclusive interviews with Joel to present an unprecedented look at the life, career, and legacy of the pint-sized kid from Long Island who became a rock icon.

Exhibiting unparalleled intimate knowledge, Schruers chronicles Joel’s rise to the top of the charts, from his working-class origins in Levittown and early days spent in boxing rings and sweaty clubs to his monumental success in the '70s and '80s. He also explores Joel's creative transformation in the '90s, his dream performance with Paul McCartney at Shea Stadium in 2008, and beyond.

Along the way, Schruers reveals the stories behind all the key events and relationships - including Joel’s high-profile marriages and legal battles - that defined his path to stardom and inspired his signature songs, such as "Piano Man", "Scenes from an Italian Restaurant", "New York State of Mind", and "She’s Always a Woman". Throughout, he captures the spirit of a restless artist determined to break through by sharing, in his deeply personal lyrics, the dreams and heartbreaks of suburban American life.

Comprehensive, vibrantly written, and filled with Joel's memories and reflections - as well as those of the family, friends, and band members who have formed his inner circle, including Christie Brinkley, Alexa Ray Joel, Jon Small, and Steve Cohen - this is the definitive account of a beloved rock star’s epic American journey.

What listeners say about Billy Joel

It' s Ok but not what I expected

Pros - I liked hearing about information regarding Billy as like most artists, they have an interesting story to tell. There were some good stories regarding his relationships that included Paul McCartney and Elton John.

Cons- It was hard listening to the narrator. He was doing character impressions which I found hard to listen to. If you tell me that you're quoting a female I do not need to hear your voice go up two octaves when quoting them. The last two memoirs I listen to were read by the artists (Rick Springfield and Heart) and were fantastic.

Overall, I would recommend this book.

This bio has much to love and hate, which seems to mirror the often dichotomous opinion people (or music critics) have of the Piano Man. Schruers covers all the bases of Joel's life from his ancestors hegira from Nazi Germany, to his early days on Long Island, through pop stardom and later touring years. As might be expected from Schruers somewhat abbreviated treatment, each episode is covered in an almost cursory way with little time for in depth exploration of Joel's musical influences, cultural context, or critical interpretation. The hits, loves, tribulations, drug and alcohol abuse just breeze by and readers hoping for critical analysis or even behind the scenes details may come away disappointed. Nevertheless, Billy Joel has its pluses. Schruers notes in his sources the hundred+ hours of interviews and access Joel gave him; add to this the interviews with others in Joel's entourage plus voluminous research and what you get is a book that brims with quotes for every occasion that often illuminates Joel's personality and humor. But therein also lies the problem. One gets the sense that this is less a biography than ghostwritten autobiography and Schruers' access may have come at the price of a reluctance to delve with any depth or criticism into the darker aspects of Joel's life. The end result is a sympathetic, almost fawning bio that will neither offend nor illuminate but should appeal to those interested in a quick, breezy read and whose curiosity about the Piano Man would be satisfied with a Joel on Joel treatment.

I quite enjoyed the narration, particularly Thornton's stabs at imitating Elton John, Keith Richards and other musicians. That aside, the narration is jaunty and befits the material.

Great for any Joel fan

If you are a Billy Joel fan, this is spectacular! I thoroughly enjoyed it and even thought the narrator sounded a little like him at times.

Great audible biography of Billy Joel. having grown up in Massapequa class of 65' ,and lived on LI most of my life, now in Fort Myers, Fl., I can relate to Billy's life in Hicksville ! My only regret is I wish I could have been a friend ,he was a good person surrounded by money hungry people!! Thank you Billy for sharing your life!

Lots of Vaseline on this lens

If this is the definitive biography of Joel, it's only so because of the lack of competition -- at least from other efforts that Joel cooperated with; something he's been notoriously unwilling to do. This book is something between hagiography and apologia. The publisher says it's based on extensive interviews, but most of the text one would presume came from interviews with Joel sounds instead like it came from his own word processor. It occurred to me that this is a book you might get if Joel had started writing his autobiography, lost interest, and the publisher hired someone to finish it. Is it bad? No. Definitive? Hardly.

Huge Billy Joel fan from the mid 70s and Streetlife Serenade. Always wondered about his musical genius. What a rough start, but his dedication was absolute. Other than that just a regular guy with a hundred million bucks.

Totally enjoyed this audiobook. The content and narration was interesting, informative and entertaining. Buy this audiobook if you enjoy Billy’s music

This reader did a pretty good impression of Billy’s speaking voice! It’s a pretty sanitized but interesting story. I’ve been a huge fan since the 70s, but even I know the man isn’t perfect. Still I really enjoyed it.

More like a soap opera than a rockstar's biography

How lovely to hear about Billy's love-life, time after time. Would much prefer to learn about his journey as a rockstar. Oh, but then I remember, he wasn't one.

the narrator was terrible!!! i turned it off after an hr n then returned it

I am a huge joel fan and should have loved this book as billy does seemed to have had a very interesting career. The experience was however very dry, the readers voice annoying and the dick van dyk British accents laughable. Came over like a text but and was not helped by quotes atributed to billy such as 'hell yah'

I was drawn in by the whole story. from start to finish. A truly inspirational story of over coming problems and perseverance and moving forward.

A must for Billy Joel fans

I really enjoyed some of the insights into the world of Billy Joel. Great story and narration.

Wordy and read in third person

Can be very wordy at times. I didn’t enjoy this being read on the third person. Took me ages to get through.

Thankyou for such a brilliant account of Billy Joel's life. It was very interesting and insightful.