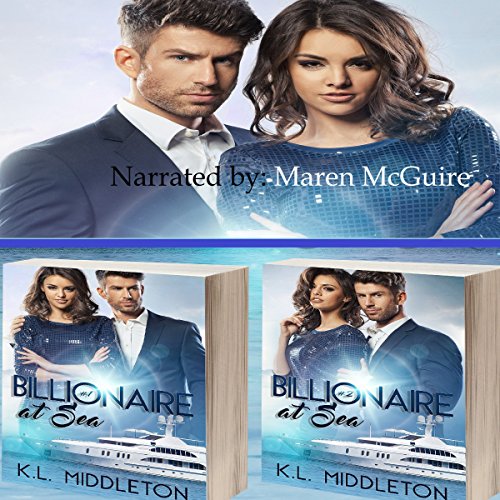 When Mia James is hired to cater a high-profile bachelor party in the Caribbean with her friend Ridley, she is reluctant to do it, but needs the money. Then she meets Damian Stryker, the handsome, rich billionaire whose hired them, and finds herself trying to fight the attraction she has for the self-proclaimed playboy.

After being forced into early retirement, professional baseball pitcher Damian Stryker takes advantage of his recent inheritance and hosts a bachelor party on his million-dollar yacht. Meanwhile, he finds himself wanting to taste more than just Mia James' cooking, and things heat up quickly between the two. It seems like the perfect weekend until his world comes crashing down on him.

Listeners should be 18 + due to mature situations and language.

What listeners say about Billionaire at Sea

This was my first K.L. Middleton's book. The story is great, and the characters interesting. The storyline has action, suspense, romance, and twists and turns. The first book ended with a cliffhanger, so it's great to have both books in a boxed set. Maren McGuire has a great voice, but unfortunately, the characters weren't easy to distinguish. I voluntarily reviewed an Advanced Reader Copy of this book.

I'm on a roll with this author for her audiobooks right now and even though some have been a miss for me, this one was a hit. it had romance, mystery and of course a cute little kid.
Definitely give it a try if you're a CR romance fan and love a bit of mystery mixed in.

Loved the twists and turns!

Overall this was a very enjoyable 2 book series. The dialogue got too wordy in some spots and the narrator didn’t do male voices well. That’s really my only criticism. Otherwise the mystery and twists these books take you on was really good.

I received this audiobook free for an honest review. These books (2-set) were very enjoyable to listen to. I would have loved to listen to this as a duet, or at least male/female narrators. I think it would have had a great impact on this story. The narrator did a great job with the characters and their personalities in this story. The author did a great job of bringing in the listener/reader with the development of Mia and Damien's relationship and the trauma that erupted in their lives. I enjoyed this double-book series.

It seems like the perfect weekend until his world comes crashing down on him...

A lovely read with some great characters. Enjoyable. A lovely romance and a wonderful read.

What a great storyline! Loved the characters and the flow of the story line. Thank goodness I had both reads since the first ends in a cliffhanger. I also really loved the multi point of view, which I feel added more depth to the characters. I thought some of the narration was a little stilted but still good. Overall I really liked all the elements of romance, suspense, action and adventure this read/listen had to offer.

I received a free copy of this book at my request and I provided this voluntary review.

Just as i wondered if anything is going to happen something happened. Started a bit slow but ended with a bang. Some great twists. Although didnt really gel with the narrator, she did a good job of all the charaters.