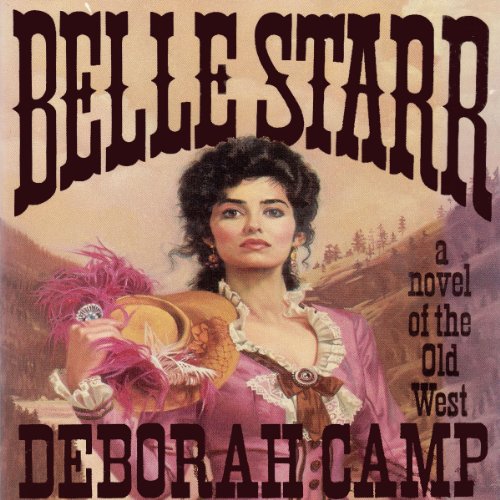 By: Deborah Camp
Narrated by: Barbara Edelman
Try for $0.00

Belle Starr is a romantic tale about the notorious bandit queen Belle Starr and her fiery relationships with some of the most infamous men of her time, including Jesse James and Cole Younger. The story follows her from her rebellious teen years to her marriages to men who often stepped on the wrong side of the law. Although she never married him, Cole Younger was the love of her life. They were kindred spirits and star-crossed lovers.

Set against a changing land after the Civil War, this is a story of a group of renegades trying to find their place among the turmoil and love among the ruins of their previous way of life.

What listeners say about Belle Starr

I grew up in Arkansas and always heard about Belle Starr. My Grandmother had a paperback novel about her (wish I had it now), so I have had a fascination with her for many years. I wish I had noticed before downloading this audiobook that it was part of Audible Escape (think "Romance").

The story was loosely based on Belle's life, but focused more on her romances with several historical figures and less on other parts of the story. The book was pretty steamy in some places (more than I really like in an audiobook), but once again, that is my fault for not doing more research before listening.

I have to say that nobody in this entire book was likeable, except maybe the child Pearl. Belle was a true harridan, all of the men were either weak or less than likeable outlaws, and the older women in the book were horrible in their own ways. All in all, I just wanted to finish the book in order to see what happened.

The narrator did a pretty decent job, but some of the voices were either overly grating (Belle) or stereotypical (Sam Starr). I sped up the narration in order to be able to finish the book.

that voice.... it was nauseating. I tried to stuck with it. I got to chapter 3. then I could listen to her anymore

what a great story...thank you for writing about this woman that was such a big part of history.

I was extremely excited for this book and the historical content. Very difficult to get into. Narration was horrible. The attempt on southern accents was hard to understand. Very easy to tune out on some characters then you end up missing a part of the story.