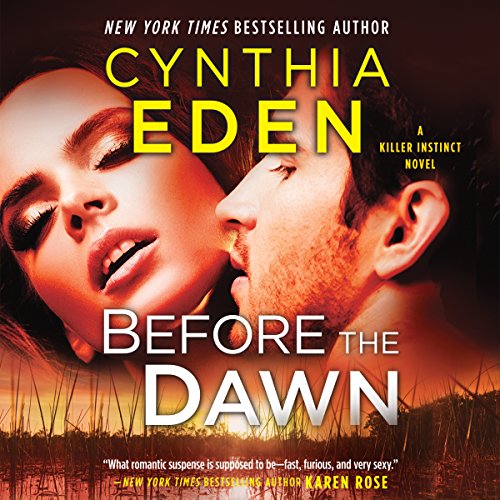 By: Cynthia Eden
Narrated by: Summer Morton
Try for $0.00

The Killer Instinct series from New York Times best-selling author Cynthia Eden continues as an FBI profiler tracks a case that resurrects ghosts from his past.

Ex-SEAL Tucker Frost knows that the world is full of evil. He saw it in the face of his own brother, Jason Frost, a cold, methodical, sadistic killer. A killer Tucker put down with his own hands in order to save Jason's final victim - Dawn Alexander, the only girl who got away from the infamous "Iceman".

It's Tucker's up close and personal experience with evil that's made him perfect for Samantha Dark's experimental profiling division in the FBI. Samantha wants agents who have personal ties with killers, who have unique insights into the minds of monsters. And when women start turning up murdered with the same MO used by the Iceman, Tucker is sent back to Louisiana to investigate.

The last person he expects to see is his ex-lover, Dawn. Ten full years have passed since the night that Tucker faced down his brother - and since he last saw Dawn. But the dark need still burns just as hot between Tucker and Dawn. As they grapple with a desire that never died, they must also face the shared shadow from their pasts. Both Tucker and Dawn have the same question - has Jason Frost come back from the dead to hunt again? And this time, will he succeed in killing the victim who got away?

What listeners say about Before the Dawn

Perfect blend of romance and suspense

I love romantic suspense, but sometime they can fall flat on either one or the other. This story though was blended so well. It had a good dose of romance, some steamy moments, and had you playing the "who done it" until the very end. It was full of plot twist that made you question your assumptions once you already made them. It wasn't overtly gory but provided enough details to paint a vivid picture. The narration was spot on, and you always knew who was talking and what they were feeling. If you're a fan of this genre, it's a must listen.

I'm a fan of this author and this book lived up to what I expect from her books. I listened in one sitting. Such an intriguing story which completely enthralled me. I enjoyed the twists and the characters were fantastic. Also narration was very good.

Would you listen to Before the Dawn again? Why?

Yes, I plan to do just that. I enjoyed the story and the way the reader enhanced the experience, but sometimes I like to listen again because I get so caught up in the suspense you miss some of the other things going on.

The main reveal scene which I will not give away but it was exciting, and you were not sure how it would end.

It moved me that Dawn's reaction to her friend's death was so realistic it was very touching.

I like this author's work, and when this new series started I bought the first one on Audible, and I thoroughly enjoyed the first book. This title is the second, and it is well up to standard. I have already looked up the publication date for the next book (26 Dec 2017) and am looking forward to reading it over Christmas.