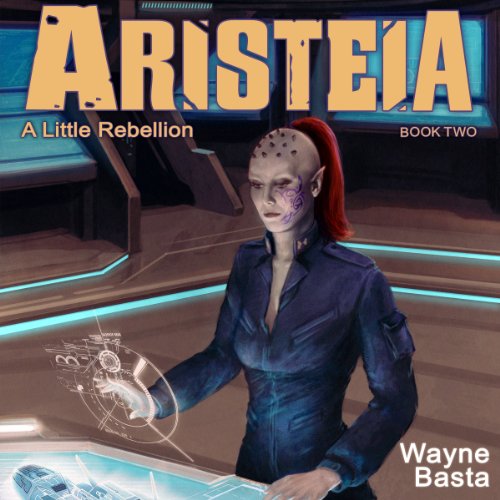 By: Wayne Basta
Narrated by: Joel Richards
Try for $0.00

I like a little rebellion now and then... The spirit of resistance to government is so valuable that I wish it to be always kept alive. It will often be exercised when wrong, but better so than not to be exercised at all. - Thomas Jefferson

Unlike her brother, Saracasi Ocaitchi has always known that her loyalties belong to the ideals of freedom and democracy, not the government of the Alliance, and that protecting those ideals would require a fight. But now that the rebellion she has dreamed about has finally begun, she must come to terms with what that truly means: for herself, for her brother, and for all of the people who will die in the coming war.

Written in the spirit of heroic space adventure, Aristeia: A Little Rebellion is the second book in the Aristeia series by author Wayne Basta.

What listeners say about Aristeia

I liked book 1 in this series and noticed book 2 is now here. BUT the filenames for book 2 are the same as book 1. This is why downloading book2 overwrites (deletes) book 1 on the PC locally. If you download book1 again same thing, it wipes out book2. SO, if you wanted to have and listen to book1 and 2 back to back you cannot.Please rename the 2 files that make up book2 from AristeiaUnabridgedPart1 to Aristeia2UnabridgedPart1 or something (so the filenames are different for the 4 files that make up the 2 books) so users can buy and listen to both.

Incidentally, I tried to use the return a book option for another book days ago, I get a popup, click ok BUT the book is not removed, my credit is not restored. I buy over 100 books a year on audible and this is an advertised feature. Please fix so it works. Thanks