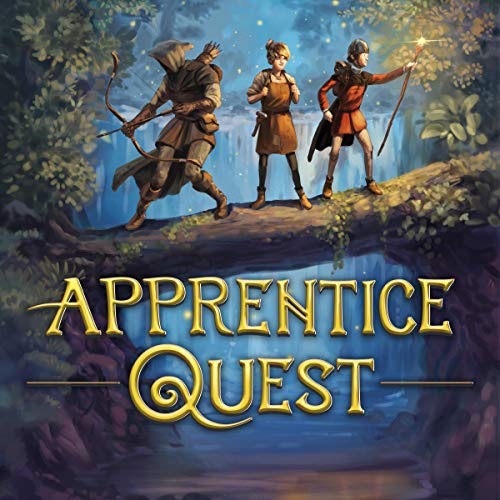 By: Jim Hodgson
Narrated by: Robert Powell
Try for $0.00

A hopeful orphan. An incredible wizard. One boy must do the impossible to change his life forever....

Ozel wonders if he'll ever escape his angry, fat caretaker. As the orphan hopes for a better future, a mysterious wizard gives him the gift of an apprenticeship and some unbelievable magic. But when Ozel discovers he's the lone heir to a massive fortune, he'll need more than a few spells to claim it.

After learning his portly caretaker plans to steal the money first, Ozel races through a forest of blacksmiths, witches, and even the undead to protect his birthright. If he survives the treacherous Tangul forest, the orphan and his wizard may just have to stop a twisted mage to go from zero to wealthy hero.

Apprentice Quest is a young adult fantasy novel full of action and humor. If you like powerful wizards, twists and turns, and coming-of-age tales, then you'll love Jim Hodgson's worthy successor to the magical genre.

What listeners say about Apprentice Quest

Interesting story line and heroes. I enjoyed this story and look forward to the next book in the series.

Although it doesn’t end on a cliffhanger, the story leaves you wondering what happens from here.

It has some corse language in it. No sex scenes. There is violence in it.

Narrated by: Robert Powell dose a great job with all characters having their own unique voice.

This audiobook was provided by the author, narrator, or publisher free of charge for a honest, unbiased review.

If you are one that enjoys tales of wizards and coming of age of youth, you'll enjoy this story. It is written in a style for teens, in my opinion, but I truly enjoyed it.

As for as Narration, Robert Powell did a fine job. His voice fit the story perfectly, again in my opinion.

I appreciated listening to this book very much so. Hopefully this information will help those trying to decide if it's worthy of a listen. Do it!

I smiled a lot and laughed some too

What a fun book this is! Well written with excellent narration. Definitely worth moving on to the next book in the series! I received a complimentary review copy of this book.

This audio book reminded me a little bit of the Princess Bride. The characters were funny and quirky. They would get into goofy situations in a matter of fact way that was comical. I look forward to more by this author.

The main characters in this first book in the Ozel the Wizard series, Ozul, Aysu, and Ergam, are likable and have great chemistry together. I loved the way they are kind to each other instead of joking/insulting like lots of other books do. The story is funny, exciting, and fast-paced, and Robert Powell's narration is great. I've heard some readers have a problem with some of the language, but it doesn't bother me. I think it's funny and unexpected, but not gratuitous. And I particularly love the message that you get good at something by practicing hard and often, not just being born with ability.

This is a great adventure story full of interesting characters lots of action a little romance and more than a few laughs. I love the light-hearted approach to the traditional quest as a graduation trope. Ozel is a charmingly naive young aspiring wizard who sets out to find his heritage and picks up adventurers along the way.
I would heartily recommend this one for anyone looking for an entertaining book to help pass the time on a summer road trip. It's light, fun, well narrated and easily interrupted for those inevitable stops and distractions.

A wondrous tale of adventure.

We all know the saying “don’t judge a book by its cover”, but on this occasion I was instantly drawn to this book by the wonderful cover art which personified adventure and childhood wonder and really did grab my attention.

The story surrounds young Ozel, an orphan living at a ‘foster home’ under the tyrannical rule of Bartu, a portly, violent man who uses the children he ‘cares for’ as child labour. One day Wagast the Wizard visits Bartu seeking a young man to act as an apprentice and chooses Ozel to accompany him.

Over the next few years we see how Ozel is given a home and treated with kindness and care while acting as gardener, cook and taught how to cast and channel magics. The aim is that, through his teachings, Ozel will, one day, becoming a fully fledged wizard himself but for now he helps around the house and with Wagasts ministrations of local folk, like the local blacksmith who's daughter is unwell and Wagast suggests a change of diet as a cure.

This changes one day when Wagast receives a pigeon from a fellow wizard Gurzes, who has heard that Ozel's parents identity have been discovered and an inheritance awaits him in the nearby city of Callan and so Wasgast suggests he go on an adventure to recover his identity and become a man.

What follows is a wonderfully enjoyable tale of Ozel's adventure which, while initially less than Gurzes had expected, expands into a most grand tale of wizard, maidens and the undead.

I really can't express how impressed I was with this story. The primary characters are all extremely likeable, while the supporting cast are equally as well rounded and interesting. Also, while we don't see an awful lot of the world in this tale, what is shown is very well written and believable.

This is all brought to life excellently by the narrator Robert Powell who gave every character a distinct voice, style and even affectation which really aided in making the whole adventure so very enjoyable.

A lot of sites seem to have this listed as a Teen or Young Adult book but I would warn that there is some explicit gore and language but at no point does the story turn dark or scary. It truly does succeed at marrying danger with comedic timing in a way rarely seen outside of the Discworld.

Listening to audible books is a new experience and one I wasn't sure about. But the narrator was so good at distinguishing each character that it was easy to listen to and a great way to enjoy a book hands-free. It was lovely to be able to sew and listen. The storyline and character building was great as well. Well written and a great narration! I thoroughly enjoyed it!

This is the first book of three, and I'm now waiting for the second book to come out on Audible!
Jim Hodgson's story is funny and the characters really come to life under Robert Powell's expert narrating. It felt like value for money with a good story length and lots of great moments. Robert's characterisations are wonderful and each character has their own voice and personality.
Highly recommend!