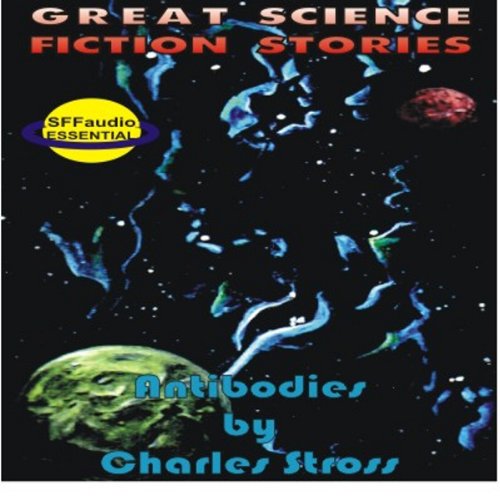 By: Charles Stross
Narrated by: Jared Doreck
Try for $0.00

Everyone remembers where they were and what they were doing when one of the great and the good is assassinated. You can kill a politician, but their ideas usually live on. They have a life of their own. How much more dangerous, then, the ideas of mathematicians? The announcement of the solution to the traveling salesman problem heralds the imminent destruction of humanity. No more salesman; no more problem.

The story begins when a computer programmer is notified by RSS feed that all NP-complete problems lie in P, and thus computer encryption is forever compromised. Knowing the disaster for what it is, he flees, but with this being such a hard take-off, he might not make it.

Stross' ideas are hard, cold, pure, and funny, but it is his storytelling - the effectiveness of the complete tale - that elevates his ideas into science-fiction excellence. Stross goes from alpha to omega faster than you can guess, and in so doing delivers a solid entry into SF's growing dialogue about the Singularity. "Antibodies" brings to mind Isaac Asimov's similarly elegant short story "Living Space".

"With a running time just shy of one hour, you aren't likely to have a more quintessential Strossian experience on audio." ( sffaudio.com)

What listeners say about Antibodies

If you understand the technobabble, its quite funny and exciting. Loved the last two words...

This story was horrible. It rambled incoherently and was rife with wild paranoia's that I suspect the author suffers from schizophrenia. I feel sorry for the narrator for having to try and comprehend what he was reading.

I absolutely love Charles Stross' stuff normally.Altered State is probably my very favourite story of his. BUT...this audiobook production is an utter horror. Particularly hearing the American voices stumbling over common English terms like 'Boots the Chemist', and attempting faux-cockney accents. If you're English...it's hideous. If you're American it'll probably just sound odd. Nothing wrong with the story - classic Stross, really, but this is drowned out by the poor audio version.

The story is a haphazard mixture of undeveloped ideas, with too many concepts being tossed around for an unclear purpose (showing off a bit?). Solving the travelling salesman problem and, implicitly, P vs NP would have enough far reaching consequences of its own, all of them more probable and more immediately destructive than suddenly being able to create true artificial intelligence (the obvious one is that easy factorisation leads to the internet/economy grinding to a halt etc). Also, being able to solve hard mathematical problems (NP) does not necessarily mean that evil AI would take hold that very minute, just because it can now compute faster. Then there was no need to add timelines to the mix. True, the story does become clearer on a second reading/hearing, but it still looks like a missed opportunity.

The male reader has a very abrasive style, almost shouting at times, no adaptive intonation, trying to create a sense of urgency, but ending up making the reading rushed. Multiple problems with pronunciations of 'chassis' (tch!!), 'vehicle' (with an H!!! two or three times) , 'spray'(shpray!! at least twice) and 'omniscient' (omnishent!!). His immitation of English accents is dubious. The musical interludes also make no sense.

The female reader, Shandra Marie, while credited in the audio file, is not credited in the 'Narrated by' field in the Audiobook listing. Why not?? She's definitely better than Jared Doreck.

TO AUDIBLE: Please add Shandra Marie to the credits!!!