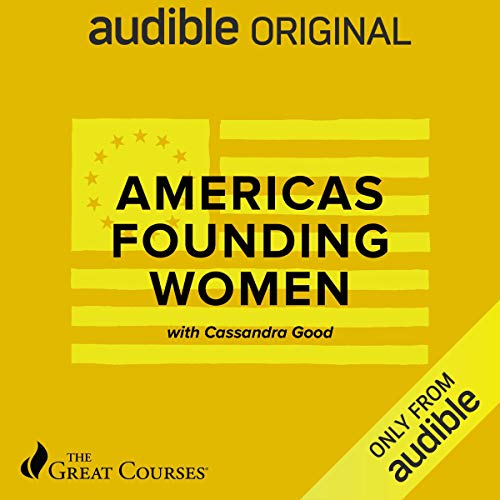 Many of us are intimately familiar with the stories of the Founding Fathers of the United States of America; we know their names, and we revere their contributions to history. Women, on the other hand, have often been discussed on the peripheries of sweeping historical narratives, including the era of the American Revolution and the early decades of the nation’s founding. But the work of gender historians over the past 50 years has brought the stories of women out of the shadows and into the light. As you will see through the women that you will meet in this course - including Elizabeth Oliver Watson, Abigail Adams, Nancy Ward, Dolley Madison, Elizabeth Freeman, and many others - they were actually at the very center of the major events of early American history.

In the 10 lessons of America’s Founding Women, you will uncover the very real stories of the women who helped shape the United States as it underwent its transformation from a British colony to a fledgling nation. Professor Cassandra Good will help you understand what life was like for women during the American Revolution, and beyond, and how these women balanced the rigid social expectations of the late 18th and early 19th centuries with their own talents and desires. You will examine the ways they used the power that was granted to them in the home and in their communities and how they forged their own paths in opposition to the limitations imposed on them.

As you study the lives and contributions of these influential women, you will trace the gains and losses toward acquiring women’s rights that they experienced in the early decades of US history. You will better understand how these complex and remarkable women played a vital role in the creation of a nation.

Cassandra Good is a historian, writer, and teacher with expertise in the history of gender and early America. She serves as an Assistant Professor of History at Marymount University in Arlington, Virginia, and was formerly the Associate Editor of "The Papers of James Monroe" at the University of Mary Washington. She received her PhD in history from the University of Pennsylvania and her bachelor’s and master’s degrees in American Studies from The George Washington University. She gained professional experience in museums, new media, and public history through her work at the Smithsonian Institution and the Museum of the American Revolution. Her first book, Founding Friendships, was published by Oxford University Press
ORIGINALS

Find a rich range of women who have used their tremendous gifts for storytelling to lift us all.

A Class of Your Own

Dive into some listens that help us grow in our jobs, our lives, and our knowledge of the world around us.

I love women’s history but this was immensely boring

I just listen to medieval women in the great courses series and was thoroughly entertained and learned a lot. Started listening to this one and fell asleep in the first 10 minutes. Need a better narrator and jazz up those pious New England women a bit for the love of god!

I’m having a hard time trusting the information in this book. A trained historian should know that standardized spelling wasn’t widely accepted until the 19th century and using spelling as a way to determine where or how well someone was educated in pre-revolutionary America is historically sloppy.

This is a great listen for anyone interested in learning about women’s history or the revolutionary era. The author makes history fascinating and relateable. Excellent!!

Cassandra takes the reader where we haven’t been before. Of course I’d heard of Martha Washington, but likely just in a support role for her husband. I’m ashamed I had never looked deeper into these amazing women and their contribution to American society.

Set within the context of our nation’s founding,
her-story of alternately being esteemed and ignored by white men in power is told with pragmatically frank gusto and optimistic humor in this lecture series.

This should of had visuals.

This an very interesting listen. As someone that took a women history class in college it is interesting to learn things that were not cover or cover differently. What I did not like is that she makes references to thing like a painting in the first "lecture" just assuming everyone knows that painting. This is why I believe is should have visuals.

Who knew that the White House had been taken over by the people prior to theAndtew Jackson's inauguration?

This is a really good summary of the rise and fall of American women's political power in the early Republic.

Interesting and informative short lessons on women in history. The author has done a fantastic job narrating her book. Easy listening. I’ll definitely have her read the book to me again!

This book had a lot of interesting historical information, and it is fairly well written. I was listening to Women's History for a month, and was happy to find this. There was a plethora of information which was organized well. Parts of it were better than others. thus the four stars. The author read it, and they are lectures, but parts were weak and felt rushed. Otherwise she did a more than acceptable job. I think that a class taught by her would be even better than listening to these lectures in a vacuum.

If you are at all interested in the early history of women in this country then I would recommend this book. To me, one of the most interesting aspects was how instrumental women were in the boycotts of British goods in the years leading up the American Revolutionary War. I was recently looking at a book of early American crafts that talks about women making and decorating fabric.