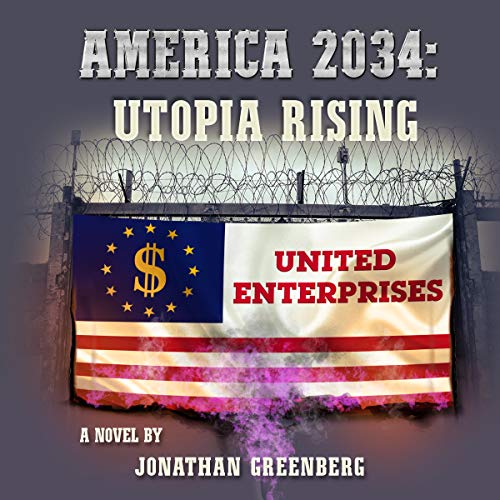 By: Jonathan Greenberg
Narrated by: James Ward,Johanna Watts
Try for $0.00

The year is 2034. Protected by a massive force field, the United Peoples of America, a separatist nation of 100 million citizens of California, Oregon, and Washington, thrive as the most harmonious utopia in human history. To the east, Donald Jesus Trump, in his fifth term as president for life, presides over a menacing kleptocracy that has been renamed the United Enterprises of America.

Winston Smith, a technology executive, works in a state of constant terror at Patriot News, America’s only remaining media organization. Two-thirds of the population has been enslaved in deadly debtor labor camps owned by the country’s oligarchs while Trump has become the world’s first trillionaire. With the human species on the verge of extinction from ecological devastation and continual war, the leaders of the new Western nation have just one week to implement the Great Expansion, to transform the nightmarish dystopia of Trump’s America by activating the Oneness gene that lies dormant within us all.

I finished it but had to force myself. The story is way off bad and some of it just sick. You got one side that's evil and then there's I guess the good side. But the good side is actually the evil side. If you look at it right. A cult high on drugs and forced into a hive mind made to think there free but they are not all control by one person. I think the author opinions made for a bad story.