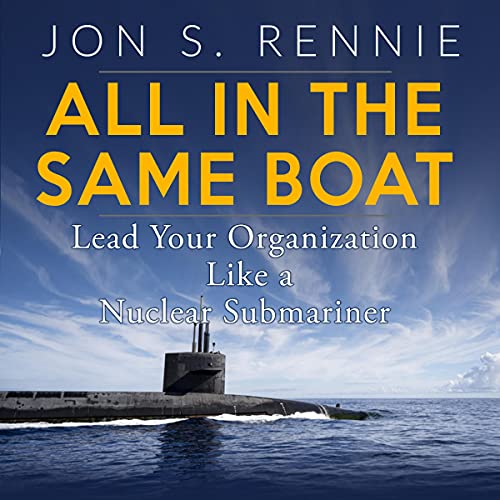 All in the Same Boat

By: Jon Rennie
Narrated by: Frank Gerard
Try for $0.00

A deployed nuclear submarine operates alone - hundreds of miles from any support and hundreds of feet below the surface.

An emotionless and indifferent enemy constantly surrounds the crew. Thousands of pounds of sea pressure sit right over their heads, waiting to crush them like a tin can and send them to the bottom of the ocean. Even the most junior sailor’s mistake can result in loss of the submarine and everyone on it.

To accomplish their mission and return safely home to their families, a submarine crew relies entirely on the actions of their fellow sailors. There is shared responsibility as well as shared vulnerability. Regardless of rank or experience, every sailor is vitally important.

When Jon Rennie reported to the USS Tennessee as a young junior officer, he had no idea what to expect. He didn’t realize he was heading out on a four-year adventure that would change his life and establish leadership principles that he would rely on for decades.

On a submarine crew, officers and sailors work together in cramped spaces and challenging conditions to accomplish complex missions with no room for failure. As Rennie moved into leadership positions in the business world, he found that the basic underlying principles for success at sea also led to high-performing teams on land.

Leaders succeed when they create a unified team with a singular mission - when all employees perform like they are all in the same boat.

What listeners say about All in the Same Boat