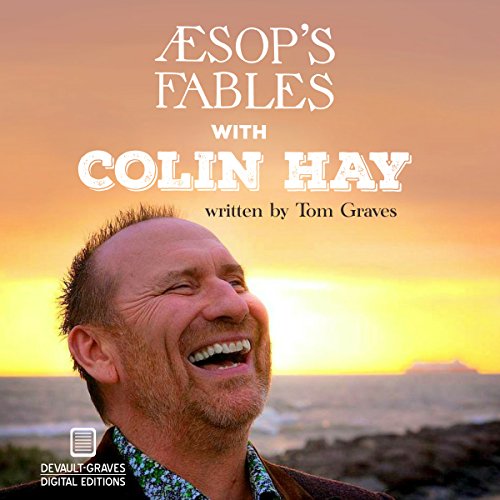 Colin Hay, the former frontman for the best-selling Australian rock group Men at Work, narrates his first audiobook with Aesop's Fables with Colin Hay, published by Devault-Graves Digital Editions. Hay, who has toured the world as a solo performer and achieved critical acclaim as a raconteur along with his intimate songs, has also acted in films and done voicework for the Disney organization. Award-winning author Tom Graves wrote new translations of 24 classic Aesop's tales that instantly connect with children of the new millennium yet retain the old world flavor so beloved by young and old alike. According to Graves, Colin Hay was a natural for this Aesop's project due to his Scottish accent with its slight twist of Down Under. "Colin has a wonderful accent and speaking voice that I thought would be perfect for Aesop's, giving it a touch of the old world but with an unmistakable modern attitude," Graves says. "Colin knocked it out of the ballpark in his reading. In test audiences, children have loved this version of Aesop's." Colin's millions of fans will also love Aesop's Fables with Colin Hay. The book is available in audiobook and an illustrated ebook is also available for those who would like to read along.

What listeners say about Aesop's Fables with Colin Hay

Aesop's Fables has always been a favorite

Aesop's Fables has always been a favorite of mine since I was a child.  I love hearing about the tortoise and the hare, the ant and the grasshopper, the slave and the lion, the goose that laid the golden eggs and more!  These are stories I shared with my children and now my grandchildren.  I enjoyed how Tom Graves put them in order and kept them short and entertaining.

Colin Hay did a great job of narration.  He gave it a lift with his accent.  His voice was smooth and comforting.  He read with a light fresh feeling making the book sound almost new.

The production quality of this audiobook was OK but not great.  It sounded as if Hay was speaking inside a tunnel, making an echo-like sound.  Although it was distracting at first, it was not annoying or took from the book at all.

This is a good audiobook for children and adults.  If you're not learning from it, you are definitely strolling down memory lane.