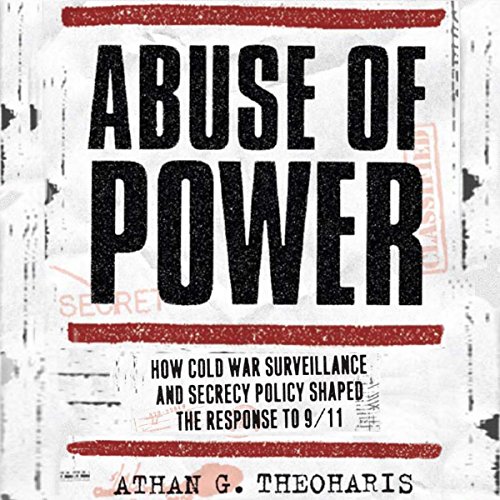 By: Athan Theoharis
Narrated by: Kirk O. Winkler
Try for $0.00

Athan Theoharis, long a respected authority on surveillance and secrecy, established his reputation for meticulous scholarship with his work on the loyalty security program developed under Truman and McCarthy. In Abuse of Power, Theoharis continues his investigation of US government surveillance and historicizes the 9/11 response.

Criticizing the US government's secret activities and policies during periods of "unprecedented crisis", he recounts how presidents and FBI officials exploited concerns about foreign-based internal security threats.

Passionately argued, this timely book speaks to the costs and consequences of still-secret post-9/11 surveillance programs and counterintelligence failures. Ultimately, Abuse of Power makes the case that the abusive surveillance policies of the Cold War years were repeated in the government's responses to the September 11 attacks.

"This book deserves a wide readership... Highly recommended." ( CHOICE)
"This is an extensively documented and passionately argued case for a national debate over the issue of domestic intelligence gathering." ( Publishers Weekly)
" Abuse of Power is quite a useful, important, and scrupulously researched book." (Ellen Schrecker, Yeshiva University)

What listeners say about Abuse of Power