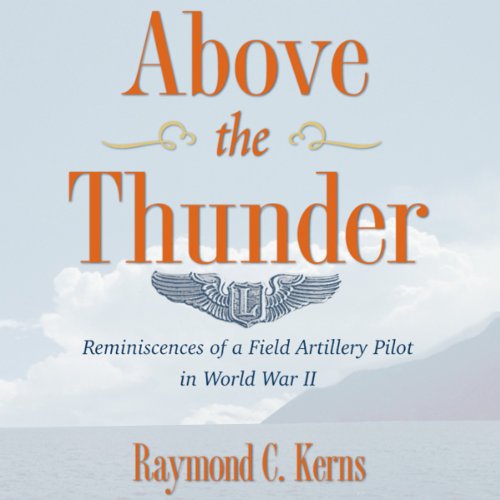 By: Raymond C. Kerns
Narrated by: Gregg A. Rizzo

An extraordinary memoir of an aviator's service in the Pacific Theater

"If you're looking for macho, fighting-man talk, you've picked up the wrong book. This is an honest narration of some of my experiences during my service in the U.S. Army between 1940 and 1945." (Raymond C. Kerns)

The son of a Kentucky tobacco farmer, Raymond Kerns dropped out of high school after the eighth grade to help on the farm. He enlisted in the Army in 1940 and, after training as a radio operator in the artillery, was assigned to Schofield Barracks (Oahu) where he witnessed the Japanese attack on Pearl Harbor and participated in the ensuing battle.

In the months before Pearl Harbor, Kerns had passed the Army's flight training admission exam with flying colors. But because he lacked a high school diploma, the Army refused to give him flying lessons. Undaunted, Private Kerns took lessons with a civilian flying school and was actually scheduled for his first solo flight on the afternoon of December 7, 1941.

Notwithstanding his lack of diploma, Kerns graduated from Officer Candidate School and then completed flight training in the L-4 Piper Cub in late 1942. He was assigned to the 33rd Infantry Division in New Guinea and saw extensive combat service there and in the Philippines. In a simple but riveting style, Kerns recalls flying multiple patrols over enemy-held territory in his light unarmored plane, calling and coordinating artillery strikes. While his most effective defense was the remarkable maneuverability and nimbleness of the L-4, he was often required to defend himself with pistols and rifles, hand grenades, and even a machine gun that he welded to his landing gear and once used to blow up an ammunition dump.

Proud of his service and convinced of the effectiveness and cost efficiency of the L-4 pilots in the Pacific and Europe, Kerns earned the Distinguished Flying Cross and the Silver Star.

Above the Thunder, arguably one of the best memoirs of combat action during World War II, will appeal to military historians as well as general readers.

I think these types of memoirs about their combat experience in WWII is important unfortunately not many men wrote them and so few are left to write. Raymond C. Kerns went into the Army and applied for flight school but was denied because he had not graduated from high school. He was sent to radio school and then sent to Schofield Barracks in Oahu as an artillery radio man. He started taking flying lesions as a civilian flying school. Then came December 7, 1941, Kerns gives an excellent description of what happened to the men in Schofield Barrack that morning. He was getting ready to take his first solo flight to graduate from the flight school needless to say he did not make it to the field to fly. He goes on in detail what it was like on Oahu for months after the attack. He applied for Officers Candidate School and was accepted. He successfully graduated then went on to Army flight school for the L-4 Piper Cub planes to be a spotter for the artillery. These men could put the plane into maneuvers the plane designers never thought of. These unarmed small planes proved to be a valuable asset to the artillery but flying them was dangerous. Kerns tell interesting stories about OCS and flight school. Kerns served with the 33 Infantry Division in New Guinea and in the Philippines. He gives detailed accounts of his experiences providing some action, and humor. Kerns explains the problems they faced flying in the Islands and the problems they overcame because of the small gas tank the planes carried. He won the Distinguished Flying Cross, the Silver Star, and the Purple Heart. He writes as if you are sitting in his living room telling you a story about his experiences in the war. He is a natural story teller. This is a must read for those interested in military history, World War II history or those who would just like a good true story. Gregg A. Rizzo did a good job narrating the story.

For the Professional Artilleryman

High above the battlefield is often thought of as safe but in Above the Thunder Richard Kerns confirms it is nothing but danger. This ripping tale of one mans experiences as an airborne artillery observer over the Pacific battlefields of New Guinea and the Philippines is journey through World War Two. He captures the personal aspects of being a pilot that loses friends along with the military ethics of war. Furthermore he expresses the tactics, both in technical and practical terms, that provides providence to today’s modern artillery observers, scout helicopter pilots and forward air control pilots. Richard’s work should be part of any modern military professionals library and serve as valuable reference for World War Two historians.